From the newly-released Finale of the Hope Series…

How she would ever say good-bye to Scott and Lane again, Jenna had no earthly idea. As she walked to the gate, tucked under Scott’s arm, holding Lane’s hand with her other, she let the thought of what the coming minutes would bring into her consciousness, and it gripped her heart so tightly that breathing was becoming an issue.

Already. She forced herself to take a breath. She couldn’t lose it now. Not now. You have to be strong. They need you to be strong. This is no time to fall apart. She swallowed the jumble of emotions back down into her heart. “Wow, good thing we left when we did. We barely made it.”

“Yeah.” But he didn’t sound wholly sure or happy about that.

Understanding what he didn’t voice, she slowed their steps and tightened her hold on his waist. “Oh, I was going to tell you, I packed some extra snacks in the bag. Animal crackers.” She grinned up at him. “Can’t fly without those.”

He pulled her closer to him and kissed her head. “You think of everything.” 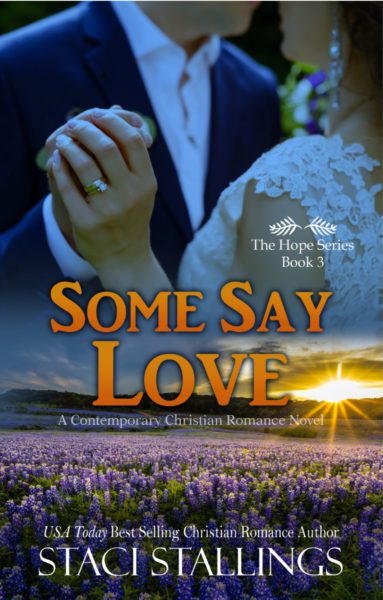 Click the Cover to Read More about “Some Say Love”

She kept the smile on her face even though her heart was about to abort the mission. “It’s a mom thing.”

When they stopped at the gate which already had people lined from one end to the other, boarding the jet bridge, his gaze swept across the area and fell right into hers. It took actual thought for her to hold onto Lane because getting lost in Scott’s blue eyes was always a possibility.

He reached up and brushed the hair off her shoulder. “You’re going to be okay getting back? I know the traffic…”

She let her gaze go soft. “It’s a whole lot better than getting on that plane would be.”

His face came close to a smile, but it fell from his eyes before it found his lips. “I’m gonna miss you.”

“I know, but just think, the next time you get here, no more leaving.”

“No more leaving. I like the sound of that.” And right there in the terminal, he put his hand on her neck and laid his lips on hers. They were warm, soft, safe, perfect. She felt the love pour through them and right into her being. She soaked each molecule in with deep, abiding joy.

Scott broke the kiss for one second. “I really wish they’d stop doing that. It’s kinda killing the mood.”

However, Jenna hardly heard anything other than her heart begging for more. She put her hand on the back of his head and tugged him back to her. “Not a chance.”

By the time Scott got on the plane, settled Lane and Laylee the bear in, and pulled out the little box of animal crackers, he felt more loved than he ever had in his life. She was incredible. Remarkable. Amazing.

A man in business casual clothes showed up and sat without fanfare in the aisle seat, and Scott remembered with no prompting the moment she had sat down with them. He had never experienced one other thing in his life that had rocked his world so fiercely. After giving Lane an elephant cracker to keep him occupied, he put his head back and looked out to the still-bright sunshine of the late Texas afternoon. The next time you get here, no more leaving… He couldn’t wait.