There’s a cartoon that I used to have hanging above my computer. It was from the cartoon strip “Shoe”.  This strip was about a group of newspapermen who are birds. The particular strip I’m thinking of is a classic. Shoe is staring out the window and Skyler, his nephew comes and berates him, telling Shoe he should be pounding the keyboard. Shoe looks back at him and says that typists pound keyboards. Writers stare out of windows.

I have long taken that strip as permission to do a lot of staring out of windows myself. Or strolling around the house. Or standing by the pantry, hands on the doors, perusing the shelves. 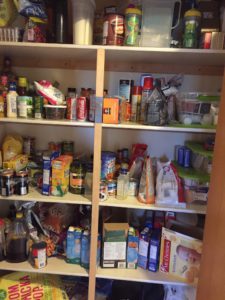 Granted then I’m looking for something to snack on, rather than inspiration, but it all comes down to the same thing. Sometimes I need to get away from the computer to get some writing done.

It used to bother me. This staring out the window. I was born and raised a Dutch Calvinist. Work and pray. With heavy emphasis on the work. You had to be productive. You had to have something to show for your time. If you were sitting and reading, well, may as well pick up the knitting and get something else done. Ditto with watching television – though we were very limited on the television watching.

Daydreaming was for people with a poor work ethic and that wasn’t us.

Trouble was, I was always daydreaming. Always making up stories in my head. I would be knitting or embroidering or sewing or doing the dishes or vacuuming and my mind would be all over the map.

I would be thinking about my heroine who was a twelve year old girl like me who had a horse that she was trying to tame and of course it would only listen to her and she had brothers who always looked out for her (as opposed to my brother who always kicked me out of his room and wouldn’t let me read his Avengers or Spiderman comics) and parents who thought the world of her and etc. and etc. I loved making up stories and that carried on for many years.

When I started writing in earnest and sold my first book, reality hit me hard. I had spent five years daydreaming about that first book, re-enacting various story lines and editing to my heart’s content. I sold it, but I was contracted to write another. Deadlines were now a reality and have continued to be part of my life. Yes there are many days I am hunched over the keyboard, pounding on it (sometimes with my head, granted) as words flow out of me. I’ve had to force myself to stay in that chair and push past resistance. But there are times I can’t seem to wrap my head around the problem. Can’t figure out what I need to do. I can push all I want, but it’s like slogging through muck and mud.

Those are the times I need to push back from the keyboard, turn my chair 180 degrees and look out the window. I don’t try to get anything ‘done’. I have to let go of the idea that I’m not being productive insofar that I’m getting words on the page. 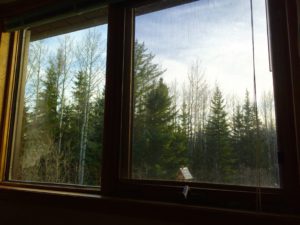 I let go of whatever I’m struggling with and just let myself enjoy what I’m looking at. Watch the clouds scudding across the sky, watch the birds on the bird feeder. Let my mind wander again. And often, when I do that, the problem that seemed unsolvable, the knot I couldn’t figure out gets untangled.

But it takes that mindless time for that to happen. Too often when we think of writers we see someone squinting at a computer screen, furiously hitting keys. We don’t think of the hours that it takes, staring out windows, for ideas to slowly rise through the muck. For story problems to eventually get resolved. For ideas to get rearranged while staring out a window.

When my mind is free and when I stop pushing, that’s often when the problem is resolved. Or a story comes to me.

So when you see a writer staring off into the distance, realize that they are working just as hard on their story as the writer pounding the keyboard.

What about you? How much time do you spend daydreaming? And what do you daydream about?