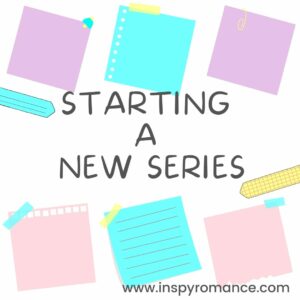 I’m often asked where I come up with so many story ideas.

The problem is never coming up with new ideas, it’s deciding which one to write first!

Starting a new series is always scary and exciting at the same time. It’s a little scary because I don’t know how it will be received. My readers have gotten hooked on the cast of characters and the location in one series and they might not be ready to make new friends in a new city, so to speak.

It’s also exciting because when I start a new series, I’ve been thinking about it and planning it for a long time. For example, my new series at Whispering Oaks Ranch has been floating around in my brain for over a year.

So what is the process for starting a new series? For me, it starts with an idea. It might be a character, or a location, or a line or scene I want to write. Because I’m always on the run, I create a note on my phone and start keeping whatever information I need in there.

For these books, I created a note called “Cowboy series”. That was all that existed at first. Later I added in names for the male and female main characters as I came up with them.

I made lots of notes about what each story would be and what order I wanted them in.

It might look messy to anyone else, but for me, I know everything I need is in that note and it’s always right there when I need to remember which brother is which book or a detail I added about them.

I’ll be honest, writing the first book in a new series is the hardest. Nailing down all the details, location, introducing all the important characters (which is a lot with SEVEN brothers!). It all feels like a lot to start from scratch. Book two feels like things are set up and it moves on easier from there.

But I love a fresh start! A new series is full of endless possibilities!

Of course, finishing a series is incredibly rewarding too.

What about you? Do you get exciting to start a new series? Are you sad to see them end? 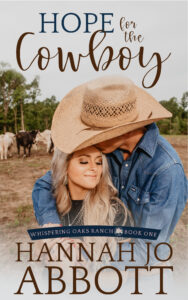 Don’t miss the first book in the Whispering Oaks Ranch series! One reviewer described it this way, “What a great story and the start of a series with lots of brothers needing wives.”

Hannah Jo Abbott is a wife, a mom of four, a homeschool teacher, a daughter, a sister, and a friend. She loves writing stories about life, love, and the grace of God. She finds inspiration and encouragement from reading the stories others share. Hannah lives with her husband and children in Sweet Home Alabama.