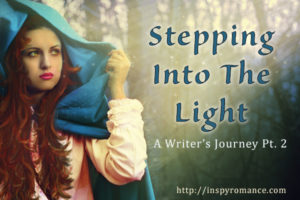 Last time I posted, I wrote about my journey to becoming a writer. A few who commented said they wanted more details about how I came to the decision to write full time.

Well something you need to know about me is I really do try to seek the Lord’s will before I make a decision. Deep down I’ve always felt writing would be in my future, even when I’d had to set writing aside while my kids were growing up.

There’s something I’ve figured out about the Lord. The Bible may say there’s a straight and narrow way to get to Heaven, but when He’s directing one of his kids, the path of life looks like one of those Family Circle cartoons that show the boy’s wanderings throughout the day. (Any of you remember those?)

After my son was born, I was given the chance to go to college. Mind you, I’d always wanted to attend college, but paying bills came first. Then, a couple of years after my son was born, I felt a nudging to go check it out. At that time, we had even less income because I was staying at home with my pre-school kids.

Crazy how, when I had less than I’d ever had, the door opened for me to go with a full grant that paid for my classes and my books. After much inner debating between me wanting to be a teacher and the Lord urging me to go for a counseling degree, do I really need to tell you who won?

Five years later, I had a Bachelor’s degree in Rehabilitation counseling.

Anyway, my story is getting long. (They always do) I was just about to finish my degree when BOOM. A story is dropped in my lap. The first one in nearly 10 years! A big story and one I simply couldn’t ignore. I sat down and started playing around with it and these characters came alive, the story flowed and after about 120,000 words I sat back in stunned amazement. Why now? I was supposed to be working toward being a counselor. I’d decided to aim for being a school counselor which would take me back to being a teacher as I worked at getting a Master’s.

Thing is, the storytelling monster had been awakened….

After that first one, which is now titled Illuminated and is the first book of my fantasy series, more started coming. Yeah, yeah, that’s great, but I have a future where I can make real money and writers don’t do that. (That’s what I said, anyway.) So I kept trying to be a teacher, which I’ll have to add was MY plan, not His. Never was His. Which might explain why I never could find a job as a teacher.

So my path came to a crossroads. (If any of you have read my fantasy series, you might remember a crossroads moment.)  There was the big wide path that I thought offered job security, decent money and all that stuff. Then there was this little over-grown path that headed into the wild unknown.

On that path, I’d pursue a real writing career. Nothing, absolutely nothing was guaranteed. It was such a wildly overgrown path, I couldn’t even see very far ahead to where it would take me. And I still can’t. Each day is a “Well, let’s see what’ll happen next.”

So, here I am. I don’t make the 47K a year I could have made and I’m sure there are people who think I’m absolutely out of my mind for choosing this direction. But there’s so much this writing path has given me. So many places I’ve been able to go, that I never dreamed I’d go to. When I get letters from someone in Africa who read my books and appreciated how God touched their hearts with my stories…. There’s not enough money to pay for that.

There’d always been a little part of me who’d wanted to go overseas and be a missionary. My stories are going for me. Isn’t it amazing how God works?

And the story ideas keep coming.

Over the past year, I’ve turned in another direction and began writing romance stories and I’m having a blast with them. They’re fun, quirky, and still embedded with the spiritual truths that my fantasy series have.

Romance does a heart good I think, don’t you?

Anyway, here I am, back to telling stories just like I did back in elementary school. Happy as a robin on a sunny day 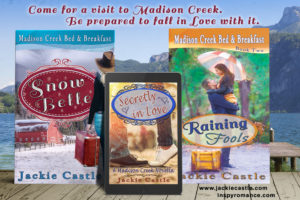 surrounded by a field full of bugs. I wouldn’t trade what I’m doing for anything, though sometimes when the income is tight, I do stop and ask, “You sure about this, Lord?”

I still believe He’s sure. And as long as the stories keep coming, I’m going to do my best to keep telling them.

So, my question to you, dear reader friends, is what kind of stories make you happy? What tales ignite a spark in your heart when you read them? Are they tales of people who do the seemingly impossible or find happiness in the most improbable situations?

Maybe there are things that you long to do or wonder if they’ll ever happen? I’d encourage you to keep dreaming. And be open to those narrow paths, those unsure, dense roads that open up from time to time. If you feel that little nudge….

I would like to pick one reader to win a free e-book version of Snow Belle. Leave a comment to be included in the drawing. And if you still haven’t picked up your free copy of Secretly In Love, it’s available at all e-book distributors.

Blessings and Peace to you!