What a busy month it’s been! Are you familiar with RWA (Romance Writers of America)? It’s a wonderful writers’ organization some 10,000 members strong, with chapters all over the world. Each year, RWA sponsors a contest for books published during the past year (the Rita) and also the Golden Heart contest for unpublished writers. If you see “Rita award winner” mentioned on an Amazon book listing, on a book cover or on the inside as part of the author’s bio, you can tell that the book has received the highest honor in RWA. 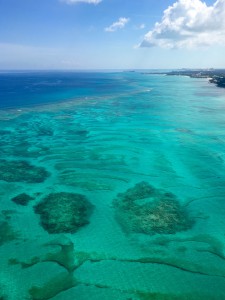 Judging for both the Rita and the Golden Heart is now over, and I made sure my judging was done before I had knee surgery on March 7th. A fortuitous decision, given that my pain meds afterward tended to make me tired and fuzzy! And as soon as I was functioning better, I needed to complete my book revisions for An Aspen Creek Christmas, which will be out this November.   Needless to say, the day after I sent in my revisions I was relieved to take a deep breath, get on a plane for the Bahamas, and look forward to a few days in the Caribbean. My husband occasionally earns such trips through his job, and this one was timed just right!  The photo is from the airplane window just moments before landing.

Still hobbling around with a cane, I probably looked like a decrepit old lady, but seeing the beautiful turquoise water, enjoying the sunshine and bobbing around in a pool–when back home, the temps were still hovering around 40 degrees–was a lovely break from writing.

For about two hours. And then I began to think. The Bahamas are a romantic get-away destination.  Research!  :)

There were couples of all ages there–from twenty-somethings who appeared to be honeymooners, to those who could easily have celebrated well beyond their golden anniversaries. Honest, I wasn’t snooping! :)   But with so many people around, it was impossible to avoid inadvertently observing the occasional interactions. Their expressions. And a few of them sometimes made me think about future characters. That model-perfect woman in her mid twenties, for instance–with a paunchy man in his sixties. What was the backstory there? Or, what about the couple who sat through a dinner at a table near ours one night, and spoke not a single word to each other?

Even in the airport, the people watching was fascinating, and sometimes sad. A couple lashing out at each other with pure venom while going through security. Or, while waiting for our flight at the gate…the middle-aged East Indian woman who sat not ten feet away from us, and suddenly burst into loud, distraught tears. Two young women with her immediately hovered, with great concern–and consoled her in a rapid-fire foreign language. I was careful to turn away and afford them the greatest amount of privacy possible, given the tight crowd, but still couldn’t help but wonder about the heart-wrenching situation she was dealing with. Which again, made me start thinking about plots and characterization. Given that I need to plot a new book and write the proposal (three chapters and a detailed synopsis) by April 15th, leaving my solitary cave (office) and being out amongst real, live people was definitely inspirational! :)

And while I’m thinking about all of that, I would love to hear about what you like to read! Are there certain types of plots you absolutely love–or any that you abhor? What makes you want to buy a book after you skim the descriptive blurb on a back cover?