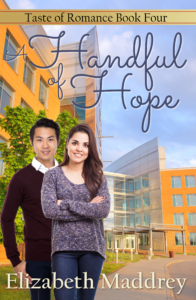 If you’ve read any of my books, you’ll know that I often have characters who have issues. Big issues. The kind that you and I have. And yet, despite those issues, my characters find love. I think that’s one of the reasons I write romance, to be honest. I want to create stories where people who are messed up as me–or even more messed up–find their happily ever after.

Often when I sit down to start a book, I have a general idea for the theme and the major issues that my characters have. It was no different when I opened up a fresh Word document to begin A Handful of Hope (book four in my Taste of Romance series.) I got about four chapters in…and it simply wasn’t gelling. I didn’t know what to do. Usually I can make it more than four chapters before I’m ready to throw in the towel. So I started praying about it. I didn’t like the answer I got. So I prayed some more, hoping for a different response. If anything, my conviction of what needed to be done grew stronger. And so, grudgingly, I went back to my novel and started tweaking.

What made it hard? My heroine, Jen, suffers from depression. Serious depression, not the “Oh, something bad happened and I’m sad” variety, but the clinical, nothing is really wrong and yet I feel like my life is worthless kind. That’s not usually a recipe for someone that people are going to flock to. Not in real life, at least. (I know this because, like Jen, depression is something with which I’m quite familiar.)

David, the hero, has his work cut out for him. Thankfully, his sister has struggled with depression, so he knows at least a tiny bit about what it takes to love someone who’s hurting in that particular way. But he still has to decide whether or not love is worth the effort. Because loving Jen takes a lot of work.

What’s been fascinating to me is seeing how God has put little reminders in my path of just how much the Church needs to see that the depressed are lovable, and how depression doesn’t need to be something that we force people to suffer with in silence. It shouldn’t be a source of shame. It isn’t an indication of a lack of faith. One of the things that I ran across was this video — it’s so worth your time.

At the end of the day, I’m very pleased with how the story came together (and once I stopped fighting it, the story came together very quickly.) I hope that readers will be able to identify and sympathize with Jen, even if sometimes she’s frustrating while she struggles with the lies that her depression makes her believe. And I hope that they’ll see in David the strength that it takes to love someone who struggles to love herself.

She wants to be worth loving.

Repeated heartbreak has convinced Jen Andrews she’s unlovable. When the groomsman she’s paired with at her best friend’s wedding shows interest, she wonders how long it will be before he realizes his mistake.

David Pak is ready to settle down with the right woman. After a disastrous first date with Jen, he’s determined to look elsewhere. But he’s haunted by the wounded look in her eyes.

How will David set aside his hesitations and see past Jen’s barriers to find love? And if he tries, will she let him?