Before I started writing, I didn’t care about the standards set by the writing industry. Maybe some of you don’t either.

I mean I’ve always been a grammar nazi about punctuation, spelling, and word placement. Mistakes in these areas bugged me. Still do. But I knew nothing of head-hopping (changing which character’s head the story is being told from mid-scene), was usage, adverbs, and various other no-no’s in writing.

Story was key. It was what 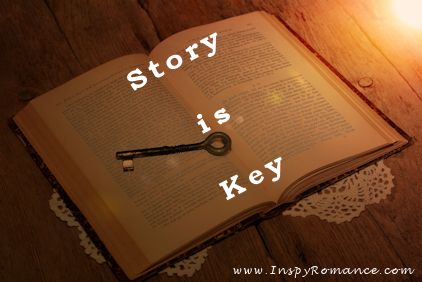 made the book worth reading.

Did the story pull me in? Could I relate to the characters–even the antagonist? Were there lengthy, boring monologues that I just HAD to skip over? Too much description? Not enough? Was I left wondering what was going on? Did the story have a happily-ever-after?

In the end, story is key. I can deal with a lot of editing issues if the story holds my attention. I’m sure you feel the same way.

When I’m reading, I LOVE cowboys, soldiers, and firemen/policemen, and feisty heroines that challenge them.

As a writer, a lot of my heroines are internally strong, but life has made them doubt their ability to survive alone. They may start the story appearing weak, but they grow toward strength as they recognize their identity in Christ.

What do you like to read about the most? Do you like strong heroines? Cowboys? Children? Pets? Marriages of convenience?

Comment with your answer before midnight Friday, 11/4, for a chance to win my latest release, Love’s Choice. The winner will be announced Sunday, 11/6 in the IR Sunday Edition.

And now an update: I am just over one month post surgery. (If you missed it, I had a tumor on my pituitary gland removed in September.) I still have an annoying amount of swelling in my nose (portal to the brain–did you know that?) due to having a deviated septum repaired at the same time, BUT GOD answered your prayers and mine, and my vision was restored completely. I am on the mend and performing my daily responsibilities, though I still tire pretty easily.

I’ve started writing again, but it’s slow going. I had hoped to get a Christmas novella out this year (and I may yet–the story just came together in my head earlier this week), but it will be a big push to do so. Keep watch. I’ll let you know. :)