I’m back home! And what an amazing six-week holiday we had overseas. On my last blog, I said I hoped to share some storyworld experiences with you on this blog. I’m so excited to have three to share today.

The first storyworld we visited briefly was Scarborough where A Hero for Heather began. It was exciting to see the dock where PJ sent Heather’s attacker swimming.

We spent quite some time just admiring the view of Scarborough and the ocean from one of the cliffs surrounding this quaint English coastal town. Afterward we took a drive through the busy streets, passing the docks where my opening scenes were set. We didn’t stop though as the day was marching on and we were eager to get to Robin Hood’s Bay, a couple of miles up the coast. 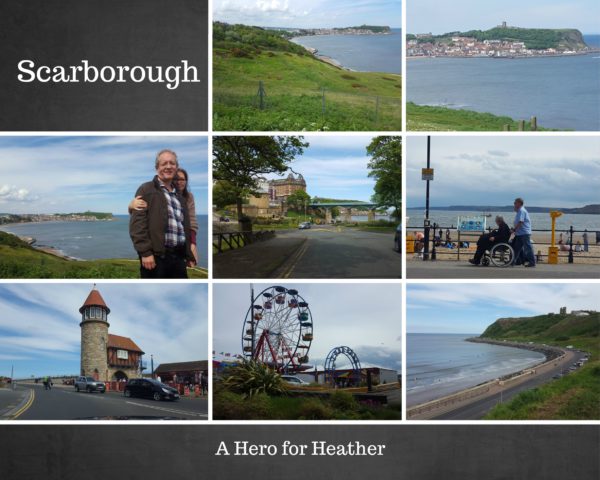 Robin Hood’s Bay…this had to be hands-down the highlight of my trip. I LOVED it, and not only because A Husband for Holly took place in this little town (as well as a lot of A Hero for Heather).

This small fishing village located in the North York Moors National Park was simply exquisite, with such friendly people living there. With each step we took, the nooks and crannies of this thousand year old place with its characteristic red-tiled roofs and maze of tiny streets, whispered of its history of smuggling. We visited the old and new St. Stephen’s Churches (both featured in A Husband for Holly), and walked the steep road down to the coastline, weaving our way back through intriguing narrow alleys. 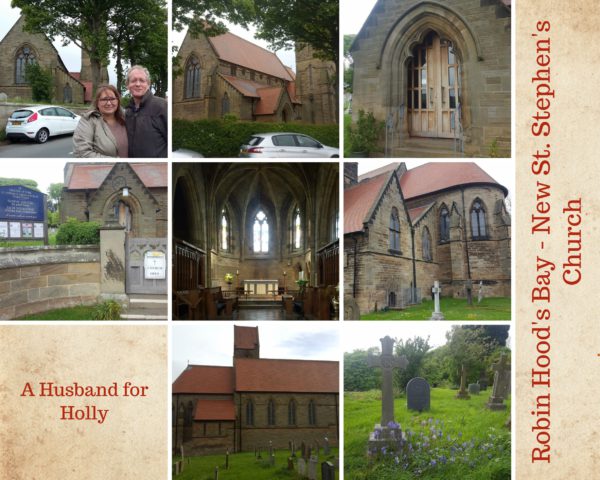 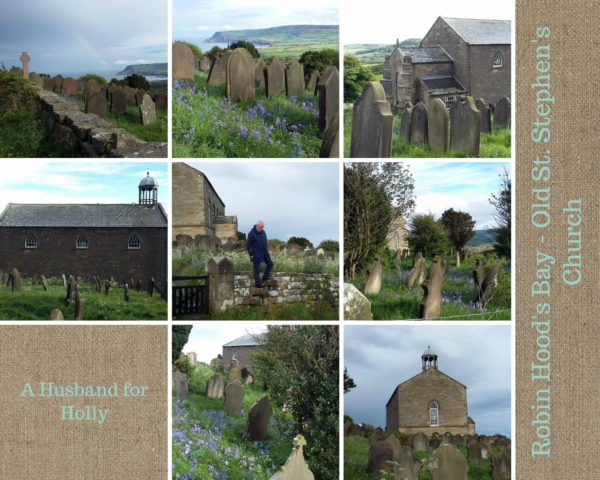 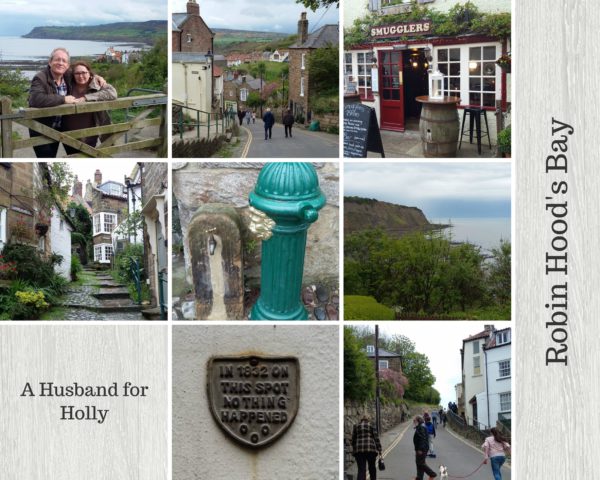 One the way out of Robin Hood’s Bay, we were blessed to meet this character. Don’t be surprised if you find him in one of my books some day. He was so interesting that I stopped him and asked if I could take a photo of him. He proudly posed, introduced himself as Dick Hoyle, and told us that he played John Brown every year in the annual Victorian Weekend fundraiser. You can read more about that event here: http://www.whitbygazette.co.uk/whats-on/village-gears-up-for-victorian-weekend-1-2764963. And to know who this John Brown was, click here: https://en.wikipedia.org/wiki/John_Brown_(servant). Hint…this is not the US abolitionist John Brown about whom a popular song was written about his body in a grave. 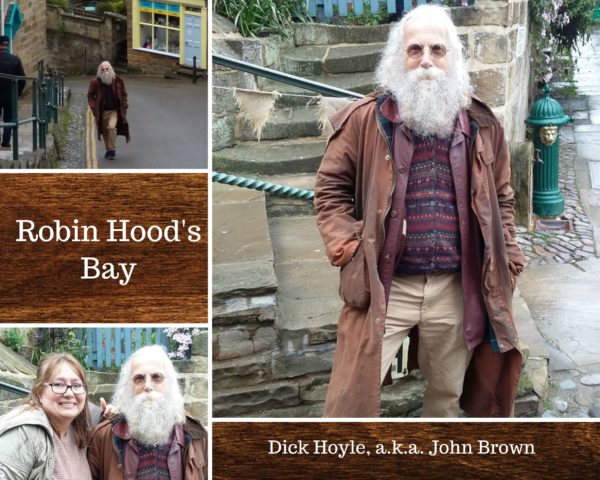 The last storyworld stop is Kendal in the Lake District to visit Levens Hall. It was incredible to walk through the house and gardens that had formed Magnolia and Davis’s worlds in A Match for Magnolia.

Historic house, Levens Hall, was incredible. Some of the features that had me intrigued were the gilded leather paneled walls throughout the house; items belonging to Napoleon like his gold cloak clasp fashioned in the shape of two bees interlocked by what appears to be an S-shaped serpent with a head on either side which was removed from his coach after the Battle of Waterloo and the upholstered saddle given to him by an Egyptian ruler; the entire original page’s costume worn in 1821 by Charles Bagot, an ancestor of the current owners, at George IV’s coronation; and the ornate carved overmantels in several rooms. Unfortunately, as the current owners live there on certain days in the year, photographs were not permitted inside so all I can show you is the majestic outside, surrounding buildings, and the gardens. 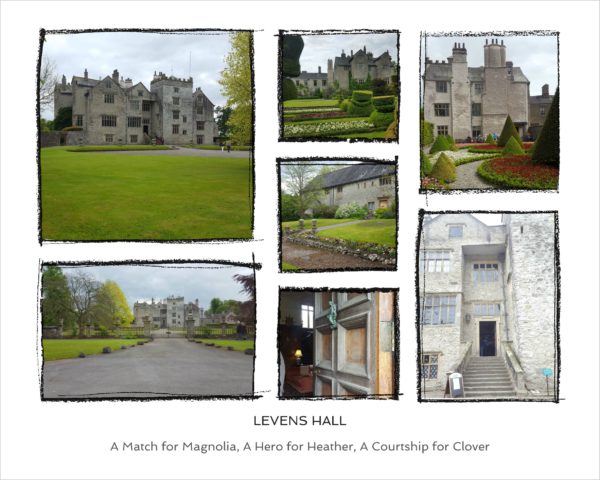 The first five chapters of Book 5 in my Seven Suitors for Seven Sisters series, A Courtship for Clover, happen between these century-old walls, and you’ll soon be able to read this next book which releases in July in the Picnics & Promises box set. 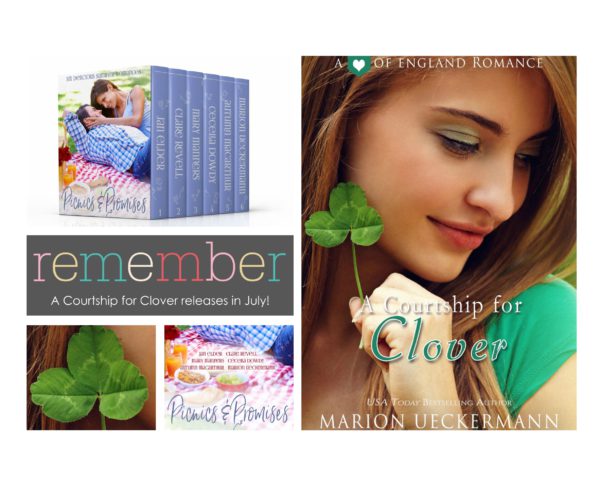 The gardens at Levens Hall were simply magnificent. With over three centuries of garden making, what else could one expect of these ten wonderful acres—from its Guinness Book of Records topiary garden with over 100 pieces all perfectly clipped and shaped, to the orchards, rose garden, herb garden, fountain garden, wildflower meadows, manicured lawns where we saw a game of croquet being played on one of them, and amongst so much more, the wild willow labyrinth which was fun to get lost in. All this beauty comes bordered by walls of hedges. No wonder my hero and heroine from A Match for Magnolia, loved walking through this enchanting place. 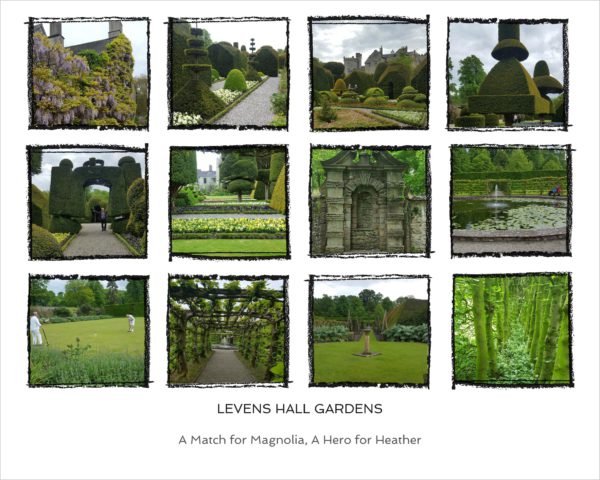 So, I know I said I’d take you to three places, but I do have one last place I’d like you to see…Ambleside, storyworld for Book 6, A Proposal for Poppy (releasing early 2018). As I walked the streets of this quaint Lake District village with its cute stone houses, I could imagine the places my hero and heroine would go, the church they’d attend, and the life they would live. I simply cannot wait to write this story.

I hope you enjoyed this journey around the world of my Blume sisters. Remember to keep a look out for Clover’s story next month. And because I love you all, here’s a sneak peak at A Proposal for Poppy’s cover (you’re the first to see it). 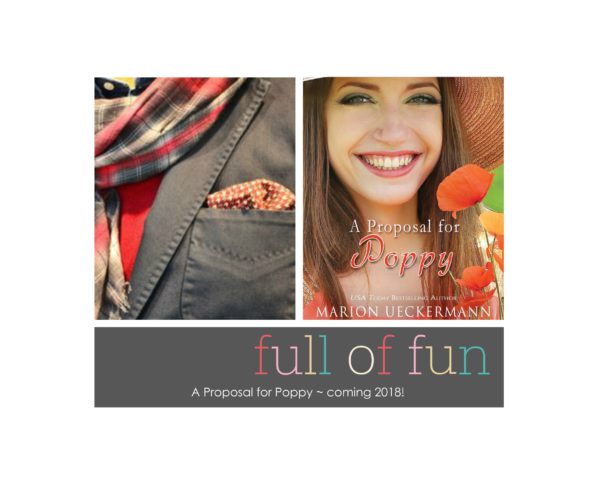