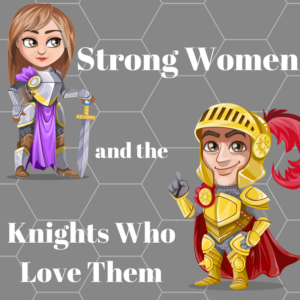 It might not surprise you to know that I read a lot of contemporary romance. I was a fan of the genre long before I was an author. (Interesting fact: The first, oh, let’s say eight, novels I wrote were all science fiction or fantasy. They may come out of hiding some day, but it seems unlikely right now.) So, while I read a lot of different genres, I always circle back to contemporary romance. You know why?

Strong women. And men who aren’t afraid to love them.

I come from a long line of strong women. Fun fact: before we married, my father-in-law-to-be pulled my now-hubby aside and said, “Are you sure? She’s awfully independent.” Thankfully, now-hubby’s reply was, “That’s one of the things I love about her.”

Of course, being a strong, independent woman doesn’t mean that I never need help. Sometimes I might not admit it to myself, but that’s usually about the time my husband will come along and oh-so-casually mention that he’d be happy to lend a hand. I don’t always love the insinuation that I can’t handle it on my own, but generally I come around to sanity and realize that I don’t have to be super woman.

This is exactly the type of hero/heroine relationship I’m drawn to in my fiction. Both reading and writing. I like sassy women who know their own minds (at least on the outside–a little internal insecurity is okay. And realistic.) And I love heroes who see those qualities as benefits, not something to be scared of. I especially love when the hero realizes that just because his heroine can handle something on her own, she doesn’t necessarily need to. I believe even the strongest woman wants someone who’ll defend her when the chips are down.

Now, I know as authors we’re not supposed to have favorites among our books, but I suspect most of us do anyway. My favorites tend to depend on the criteria I’m using when I think about them. In this case, thinking of strong women and men who aren’t intimidated by that, I came up with the following favorites.

Lydia Brown, in my debut novel Wisdom to Know is a strong woman. So strong, in fact, that she gets herself into some really bad situations because she’s convinced she knows best. No matter what. And Kevin? Kevin has loved her forever, and keeps loving her through those hard times, despite the fact that she continues to resist and refuse his offer of help.

Wisdom to Know is free on all e-book platforms.

The second heroine that came to mind was Gloria Sinclair, from my March release, Donuts & Daydreams. Gloria is a former Marine and a current police officer. She made some significant changes in her life because she knew it was needed to be done. And she hates asking for help. Jonah Baxter isn’t intimidated by Gloria’s profession, or the fact that she knows her own mind, although he really wishes she’d change her mind a little when it comes to certain decisions she’s made.

You can get Donuts & Daydreams on any e-book platform.

My final pick (but by no means the last of my super strong ladies), Deidre MacIntyre in A Heart Restored deserves to be mentioned, I think. She’s faced some pretty serious upheaval, and instead of wallowing, she strikes out on a new venture. She’s most content when she’s up on a roof replacing shingles or ripping out a wall. Something that lets her make her vision a reality. And Jeremiah loves every bit of that knowledge.

A Heart Restored can be found in all formats.

There are a lot of strong women in the books of my fellow InspyRomance bloggers’ books, too. I think of Jo in Raspberries & Vinegar by Valerie Comer. Or Avery in Nowhere for Christmas by Heather Gray. Then there’s Kristy O’Neal in Love is a Battlefield by Annalisa Daughety. And Catriona Maclean in Autumn Macarthur’s More Than Friends. Or Jenna Anderson in Julie Arduini’s Entrusted. Or Veronica Quintana in Lee Tobin McClain’s Joy of My Heart.

I could go on and on — but now it’s your turn! Give us the title and author of a contemporary Christian romance (keep it contemporary please!) with a strong heroine and a hero who loves that aspect of his lady’s personality.