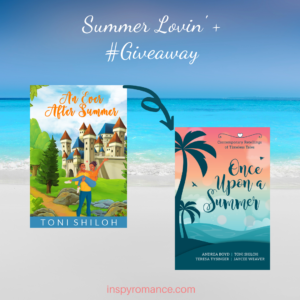 Are you singing the song yet? ;)

I know that May isn’t officially summer for some of y’all but that calendar flips over and my mind already starts thinking about summer. And I thought there was no better way than to get you in the summer mood then to talk about my upcoming novella, An Ever After Summer. It’s one of the four book in the collection Once Upon a Summer.

If you read Once Upon a Christmas, you may be wondering what’s the connection. So I have that answer for you! It’s contemporary fairy tale retellings. The characters are all different as are the fairy tales.

All of these contemporary romances are set in the summer. We’ll take you from the Carolinas to France to New Mexico. This collection is currently on preorder for 99¢ and will be available on paperback sometime later this month. I thought I’d share an excerpt of my novella to pique your interest. 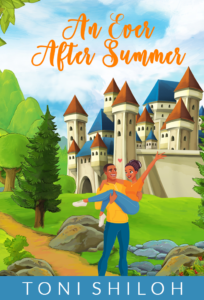 “Bonjour.” Bellamy Larson repeated the French greeting, copying the inflection and tone from the French language audiobook. She was running out of time for the vocab to stick in her head, since her flight out of Baltimore left this evening. She hadn’t used any of her high-school French in almost eleven years.

She placed her neatly folded shirts into her suitcase next to a stack of leggings. Her luggage already held a few dresses, skirts, and cardigans in case the summer nights held a chill.

When her coworker Carter had returned to the office of In a Bind in tears, that had marked the fourth employee to be sent away from the Thibodeaux project. Her dad had been determined to fly across the Atlantic and give their client a piece of his mind. Unfortunately, her father had also been diagnosed with walking pneumonia earlier that day, which meant Bell was being offered as the sacrificial lamb. She couldn’t let her father worry when he should be focused on healing. Who knew what kind of germs he’d catch on the plane if he had to fly to France instead of her?

No, Jean-Luc Thibodeaux would just have to deal with her and not her father or any of the other employees at In a Bind. Three of the employees they’d sent to try and please the Grinch—though he lived in a château, so maybe Beast would be a better nickname—had threatened to leave In a Bind; a fourth actually had. There weren’t enough book curators in the world to lose one to a surly customer.

When Bell had offered to go, her father had been appalled.

Before I go, I’d love to offer you a giveaway. For a chance to win a $5 Amazon gift card, tell me what your favorite summer activity is. Please comment by 5/9 at 3:00pm and I’ll use a random generator to pick the winner.