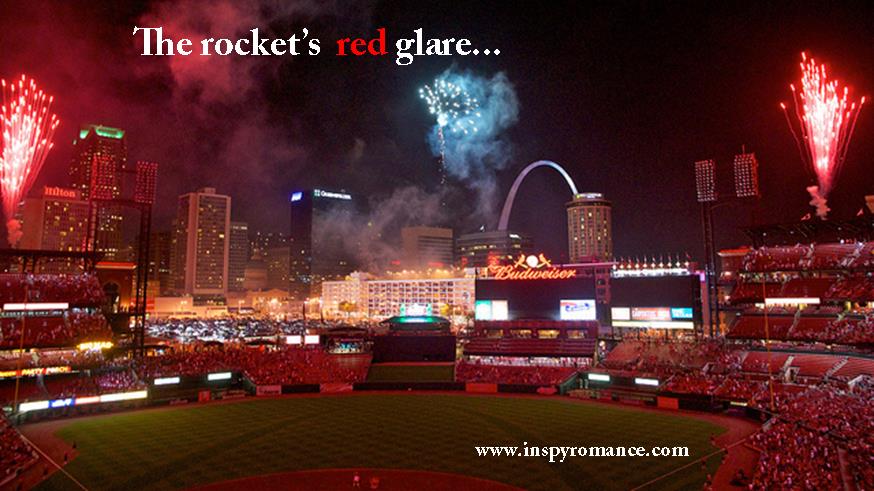 Yes. I know. Val posted fireworks to tell y’all that we were closed on Friday, but I had to post more :D. Why this pic? Because it’s at one of my very favorite places in the whole world – Busch Stadium, home of the 2013 National League Champions, the St. Louis Cardinals!!!! Yep. I’m not from St. Louis, but they’re still my team. In fact, one of the hotels to the left over there [I’m not SURE which one] is where this year’s American Christian Fiction Writer’s National Conference will be held. About seven hundred authors – from NY Times bestselling authors to complete newbies and everyone in between (that’s me) – will gather for about 3 days in September. If you’re in the area… well, for those few days it has the largest Christian fiction bookstore you’ll find just about anywhere – and it’s open to the public.

I’ve also been up to my elbows in edits on a manuscript where this particular location is pretty significant, so when I saw the picture, I knew I had to use it :D. 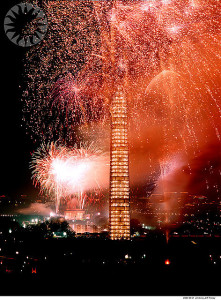 For you Americans out there, did you have a good Independence Day? We have some friends we do two things a year with – New Year’s Eve and the Fourth of July. We see them often but we have standing “dates” those days. This year, we decided to not to go to a particular fireworks show when we realized the show going on around us was even better. So many of our neighbors set off fireworks – including some pretty big ones – so we didn’t have to go anywhere ;). I ended up staying inside with my fraidy-cat dog. I cuddled with him and my 12yo daughter who was worried about him, too. At least until both husbands managed to set the storm drain on fire… ;) It wasn’t as bad as it sounds :D.

(Okay, the dog is a rescue dog and very skittish about lots of things anyway – I don’t think he ate anything at all yesterday – we went to give him breakfast about the time the first fireworks went off – they’re legal from 10am-midnight in my town, plus I live near people who aren’t in a city but live in the county where there’s different rules. Some folks are setting them off again right now (Saturday night) – and he’s not loving it at all :(.)

For you non-Americans… do you have something like Independence Day where you live? Tell us about your traditions? We’d love to hear them!

If you’ve won a prize, be sure to contact us at the address below! And don’t forget every comment you make enters you for our monthly drawing! The June winner will be announced next week when Val’s back in the swing of things, so be sure to check it out!

The past week was another stellar one here at InspyRomance. I know I say something like that every week, but, well, it’s true!

Monday, Becky Wade was my special guest talking about types of conflict in romance.

Katherine Reay stopped in on Tuesday to talk about the Christy Awards and the amazing books that won this year. Check it out if you’re looking for something to read!

Husbands need romanced, too? Wednesday, Krista Phillips talked about ways to romance the man in your life.

What does Boston Market have to do with true love? Hallee Bridgeman told us all about it on Thursday.

Friday, we were closed for American Independence Day.

On Saturday, Jennifer Slattery continued her story, The Princess and Her Gown. 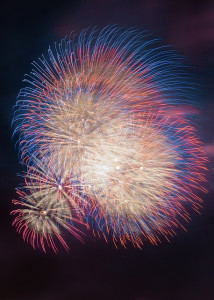 SALES & GIVEAWAYS
Raspberries and Vinegarby Valerie Comer is on sale for Kindle for 99¢.

Newsletter Sign-Up and Giveaway
Carol Moncado is have a newsletter sign-up and chance to enter a drawing for an Amazon card or your choice of three books on a list made from her extensive collection – including several from InspyRomance authors! Enter through July 31.