Hello out there in InspyLand!

I hope y’all had a good week! Ours was freakishly busy but good! All four of my kiddos swam in the summer league championships for our area on Thursday. A seven hour afternoon at the pool where I spent about five hours sitting on the concrete edge of the pool taking pictures (since I run the Facebook page and hoped to get pictures of everyone…). I was sore enough, I might as well have swum in the thing :D. Our team came in third this year after tying for second last year.

While I have nearly 900 pictures from Thursday afternoon, I can’t find one that really fits what I want to say (at least not without lots of other kids in them – and I wouldn’t post it without permission) – so I’m going with this one again – and I promise it’s the last week I inundate you with swimming stories and pool pics – until next summer anyway ;). 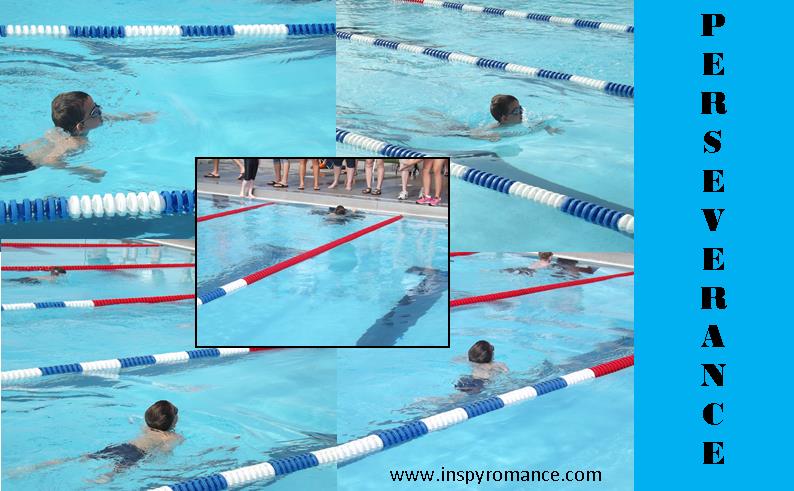 Before getting to the swim meet – old business… The winner of June’s Amazon card is:

for her comment on Merrillee Whren’s June 7 The First Kiss post. Patricia, and anyone else who won a prize, email us at: 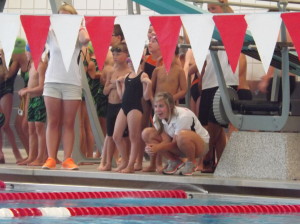 That swimming picture up there is still appropriate. The picture to the right? That same coach I mentioned a few weeks ago. You can see her cheering and encouragement is written all over her face. It’s part of who Coach Alivia is. She’s an encourager at her core** and I have many others of her the same way, but this picture…

They FINISHED! It seemed like it took half of forever, but the four of them finished.

And something else I noticed? 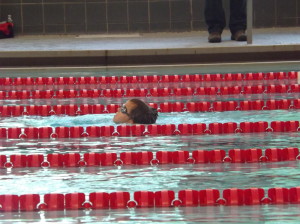 Keeping his head above water – barely – during his freestyle relay

Well, a few summer Olympics ago, there was this guy from some African country I don’t remember.The first time he’d ever SEEN an Olympic size pool was when he reached the Olympics. He’d practiced in a lake (hard to do flip turns there…) or a hotel pool, depending on your source. Somehow, thanks to false starts, he ended up being the only person in his freestyle heat. Though there was no way he’d make it to the next round based on time, the cheers in that arena rivaled those for Michael Phelps on his best day.

(I had to go look it up – Eric “the Eel” Moussambani from Equitoreal Guinea in the 2000 Sydney Olympics.)

And I saw the same thing played out in this natatorium filled mostly with kids ages 4-18. Kids these days are often given a bad rap for being poor sports, but not most of these kids. Whether it was my son’s freestyle relay team or the kid doing an individual medley and starting his last stroke after everyone else finished, those kids were cheered just as loudly as the kids who finished first.

Does everyone get ribbons? Or every team a trophy? Nope. But every kid got cheered on. As they should. They’re there. Giving it their all. And that’s worthy of cheering, even if they’re like that guy at the Olympics. Knowing they had no shot at moving on, but doing it anyway.

And if you want to see how our team celebrated that third place? Check out the cover picture here. So much fun! 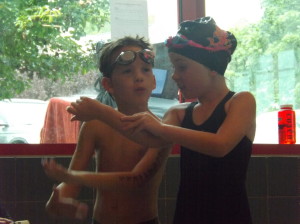 Christopher and Maddie discussing their relay

*In his individual 25 yard freestyle, Christopher knocked almost 11 seconds off his personal best for a time of 47.85. None of my kids finished last (if you include disqualifications) in any event and they improved their times in all but one (when my 12yo hit her hand on her 50 yard backstroke turn around). That’s all we asked for. And they delivered in spades.

**This is why she has an awesomely sweet character named after her in a couple of my manuscripts ;)

Inspirational? Well, those kids who don’t give up certainly are! Romance? Um, out of the 500 or so kids there, you never know… there could be romance someday… In the meantime… here’s what happened around here this week while I had chlorine on the brain… :D

Monday, Carla Laureano talked about why we read romance when we already know there will be a happily ever after.

Lynnette Sowell took us to some bookstores “on the road” on Tuesday.

To-be-read piles were the subject of Annalisa Daughety’s Friday post.

Saturday, Ginger Solomon talked about her release, One Choice. 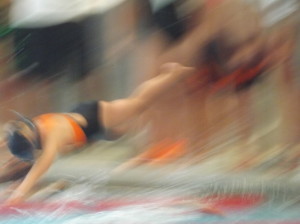 I’m pretty sure this is my 10yo in her freestyle relay, but I’m not positive – I love the pic though ;) – for blurry, it’s got kind of some artistic thing going on :D

SALES & GIVEAWAYSRaspberries and Vinegarby Valerie Comer is on sale for Kindle for 99¢.

Newsletter Sign-Up and Giveaway
Carol Moncado is have a newsletter sign-up and chance to enter a drawing for an Amazon card or your choice of three books on a list made from her extensive collection – including several from InspyRomance authors! Enter through July 31.