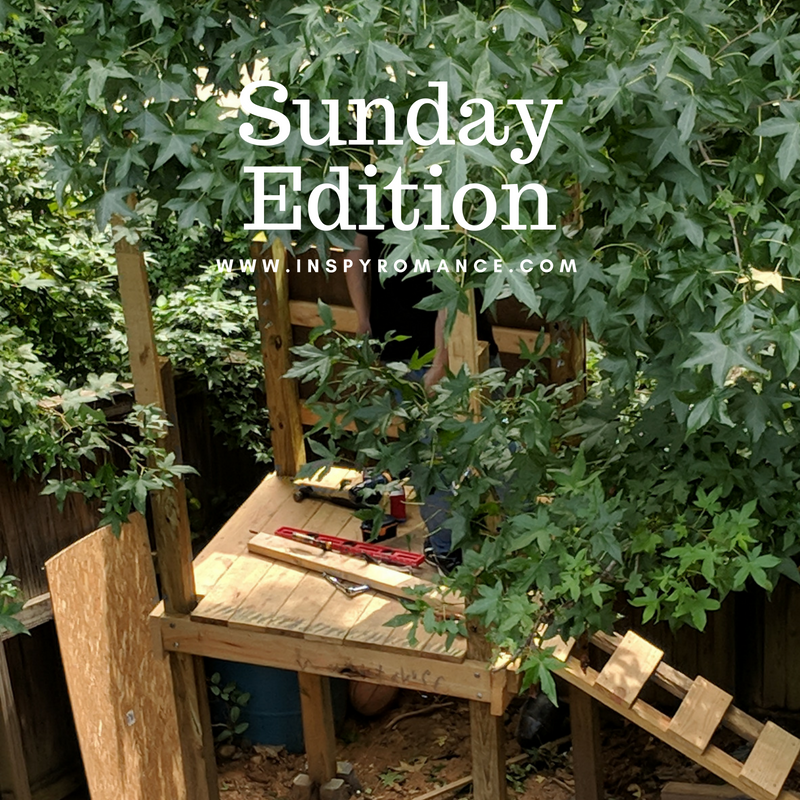 Here we are back at Sunday again! Anyone else feel like their summer (or for those of you in the Southern Hemisphere, winter) has zipped past? Hubby and my boys have been busy the last two weekends adding on a “watch tower” to their fort. (You can’t see the rest of the fort – just the watch tower in progress. And hubby hiding behind the sweetgum tree.) They’ve been having an absolute ball. And tracking loads of mud into the house when they finish, too. So bonus for me? 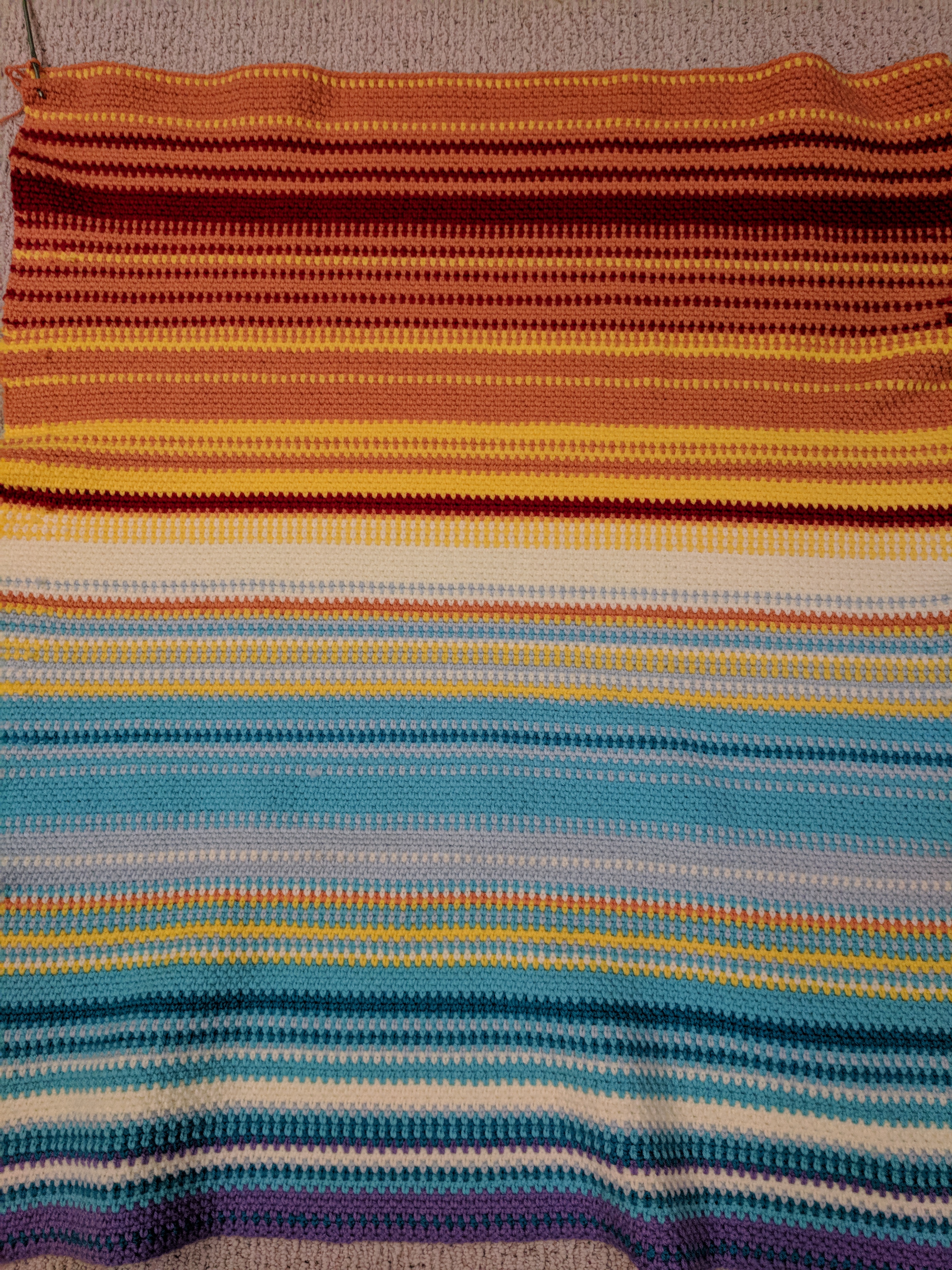 I promised you last week a look at the temperature blanket. That’s through the end of July (which I actually did take at the end of July. I was planning to lead off on Sunday Editions with the blanket, but then various other things took over, and here we are. I thought about taking a new one prior to setting up this post, but as I’m on Sundays in September, too, it’ll give me something to share then. (But if you want to picture it, just add a lot of orange and red. It’s been hot.)

Actually, I’ve been kind of kicking myself for using the actual temperature rather than the temperature + heat index. Because there’s a lot of orange in July (and August) that should, based on how it felt outside, be red. Ah well, live and learn, right?

A friend doing a temperature blanket is using 5 degree increments, and, despite all the extra yarn changing I almost wish I’d done that, as well, because 81 is significantly different than 89, but both are orange. Still, I’m enjoying the project and it’ll be a fun memory to have later. 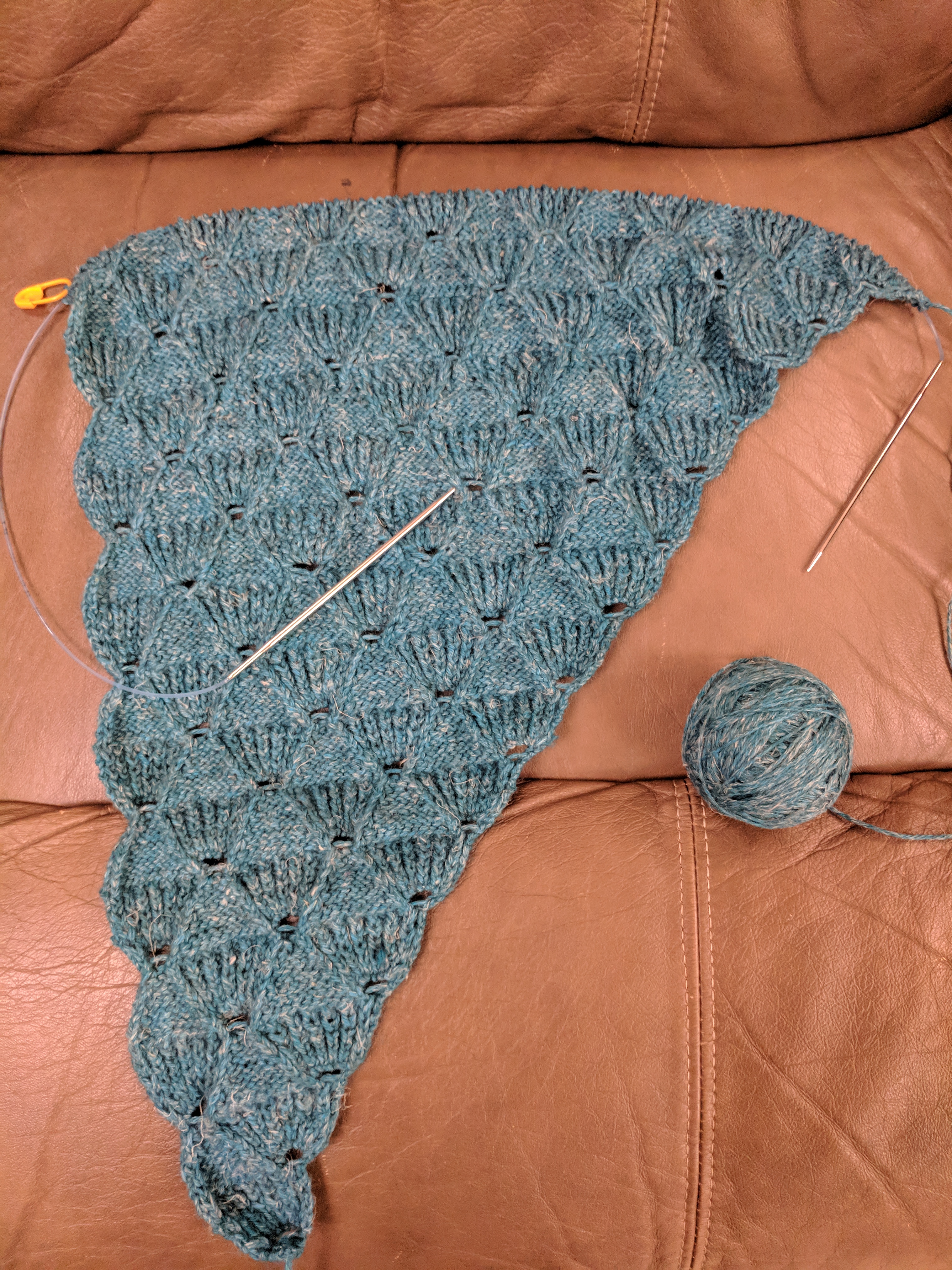 Crocheting has gotten me back in a yarn mood, so I also started knitting a shawl. It can be worn sort of like a scarf, so that’s likely more how I’ll use it, but here’s the start. I’m about 3/10 of the way to the end (and yes, that’s an odd fraction, but I wanted to be exact, so I figured the number of rows total and where I was and did the math. Just for you. Except of course I love math, so it wasn’t really a hardship. I should’ve made my 10 year old do it though, he needs practice reducing fractions.) 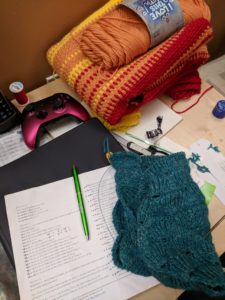 This is the little table where I store my projects. And my Xbox controller :)

On Monday, we kicked off the Back-to-School Giveaway.
On Tuesday, Elizabeth Maddrey talked about steamier Christian romance.
On Wednesday, Liwen Ho discussed the impact of a good kiss.
On Thursday, Jackie Castle brought us to lavender farms and other sweet places.
On Friday, Melanie Snitker talked about how writing one book leads to ideas for others.
On Saturday, Staci Stallings talked about old friends.