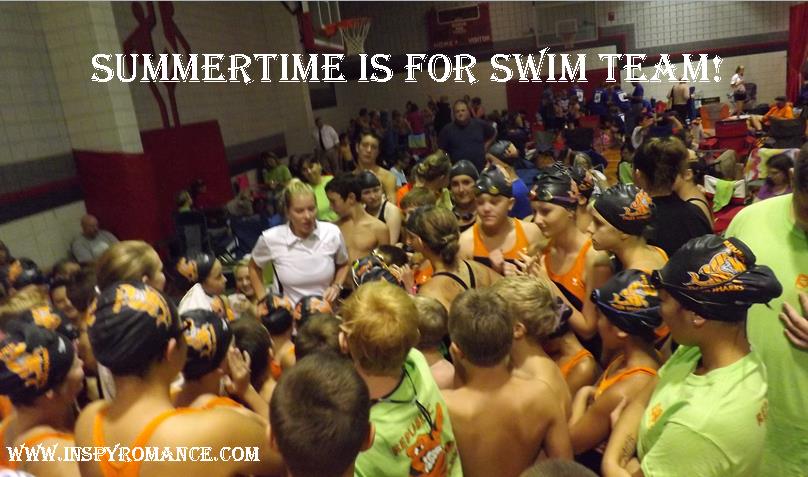 Pep talk before the big meet

About a year ago, I woke up on a Sunday morning and went “D’oh!” then quickly wrote a Sunday post and included some thoughts on perseverance. In that blog, I talked about my son and how he managed to swim a full 25 yard freestyle race for the first time. His coaches were standing at the end cheering him on. He didn’t win, but he did finish. 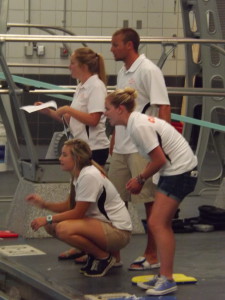 Last week, I mentioned that our swim team took first place in our district. One thing my husband and I noticed was that our coaches were always at the other end of the pool, cheering all of our kids on. I won’t say that’s why we won*, or that the other coaches weren’t around, but every time – every time – I looked out there, at least one of our coaches (and often another swimmer or two) were at the end cheering them on.

And they didn’t cheer just for the “good” swimmers, the ones who would win or place highly in their races, but for all of the swimmers. They didn’t encourage just the kids they usually work with (the kids are loosely divided into five different groups – bronze (upper/lower), silver (upper/lower), and gold – based on their age and ability and the coaches tend to work with the same kids most of the time). They stood there for the better part of six or more hours**, encouraging Every. One. of the sixty plus swimmer we had there that day.

That’s not to say the coaches on the other teams don’t encourage their kids and they may well have been on the side with the starting blocks, but there’s usually about a million swimmers milling around back there and it’s hard to pick out the coaches from the stroke judges, etc.

But, for us, it reminds of one of the things I love most about our pool and our team. They spend hours every week at the pool. Early mornings. Late evenings. Whiny kids. Annoying parents. (I really do try hard not to be one! But we all know they’re out there!) Kids who won’t listen and goof off instead. 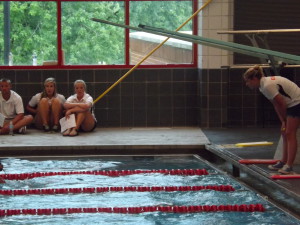 Head Coach Dixie cheering on two swimmers while the others take a (brief and much needed) break.

But they’re there. Helping kids figure out flip turns. Explaining (and showing!) how to do butterfly properly. How to count the number of strokes so you don’t hit your head on the wall in backstroke (and putting a hand in the water to help buffer it). Figuring out which kids will swim best together in the relays.

Asking not that the kids win, though they certainly want them to try, but that they do their best.

That they finish the race.

This is why I named characters after some of our coaches/lifeguards. Why I set a book (and eventually a series) at the Serenity Landing Aquatic Center. Because they’re awesome.

In the great swim meet of life, we have friends and family who cheer us on. People who walk alongside us as we struggle to finish that individual medley we’ve never done before – or a race where our goggles fell off. But God? He’s omnipresent, but He’s not exactly…visible. We can’t hear Him cheering us on. Or can we?

Because, even though my kids may not be able to hear their coaches over the roar of the crowd in the indoor natatorium – or while their ears are under water ;), all of those things they’ve spent the whole summer hearing reverberate through their heads. 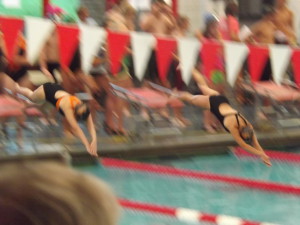 My 13yo daughter and her BFF starting their freestyle race

And just like the voices of their coaches, God’s given us words of wisdom and encouragement. As we go through life, verses pop into mind just when we need them. Those words of encouragement. The little pick-me-ups when we need a boost to swim a few more strokes until we touch the wall. That snippet of a sermon or a song or – dare I say it? – a book (fiction even!) that’s just what we need to hear.

He may not be visible or have an audible voice, but He can definitely speak to – and encourage us, coaching and cheering for us – just when we need it. Often even before we do so that we recall those words when the time comes.

*Having a lot more swimmers than the other teams helped a lot – usually the team that came in second this year has nearly three times as many swimmers as they did this year and they’ve won first for a long time. Generally, the more swimmers (especially 15-18 and 6 and under as those groups are much smaller), the more points you’ll end up with (in individual races, the top 14 spots get points). 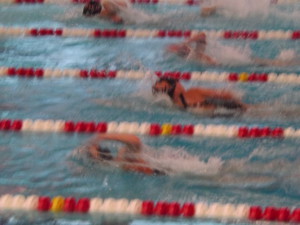 (Somewhat Blurry) Proof my daughter WAS ahead – at least for a few strokes!

** Okay – it wasn’t six hours straight because they went to help get the next set of swimmers organized or sat to the side for a bit when there was a group of heats where we didn’t have any swimmers.

All right – so that was WAY deeper than I meant to be on a Saturday evening, but there we go ;). (And those two posts I linked to from last year are pretty good, too. I know for me they were a good reread.)

As always, if you’re a winner, contact us at:

The winners of an ebook of their choice from my Royal Wedding post are Trixie O. and faithdp24!! 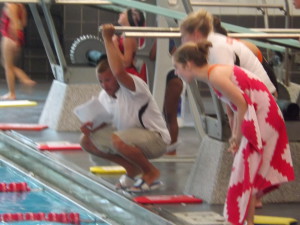 Monday: Sally Bradley talked about the playful side of romance.

Tuesday: Elizabeth Maddrey talked about a family reunion – and how her in-laws support her writing.

Friday: Diane Lil Adams talked about her husband – and how he won her over to romance.

Saturday: Heather Gray brought a bit of Christmas in July! 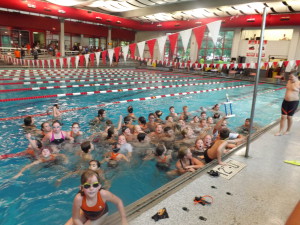 Celebrating in the pool after the win – they all treaded water for about 10 minutes – and it’s 12 feet deep there! 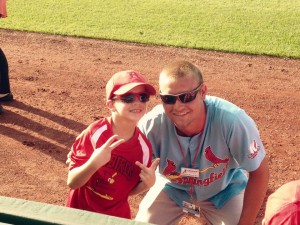 Coach Andrew also interns for our local minor league team – my son got to stand with the left fielder during the anthem but Andrew made sure to say hi :)

Believe in Me by Autumn Macarthur is on sale for 99¢ July 12-17. Merry Christmas in July!

Hand-Me-Down Princess by Carol Moncado available to preorder for a special price of 99¢.