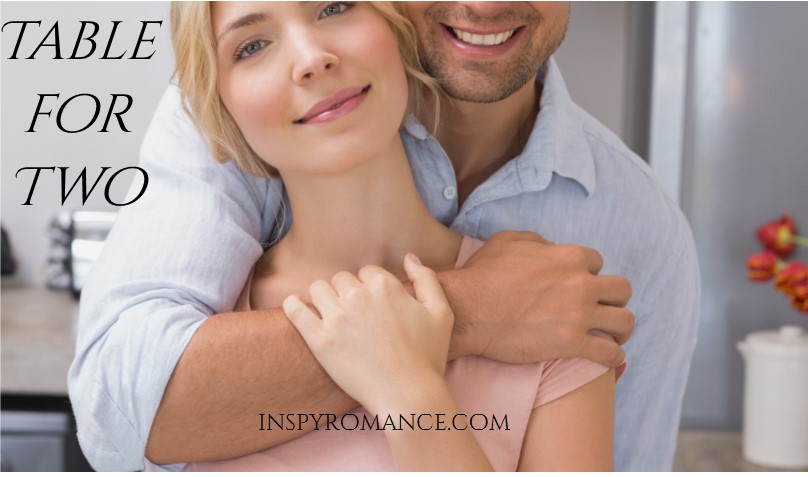 Hey, everyone out there in InspyRomance Land! I hope y’all are doing well! I had a variation on LASIK a couple weeks ago, so I’m hoping to be around to answer comments today, but my eyes are still pretty iffy most of the time ;). I’m so looking forward to the day they clear up all together :D.

A couple months ago I was asked to join four other fantabulous authors in a restaurant themed collection. Table for Two released a couple weeks ago on Amazon. I went back to Mallard Lake Township from my Protecting the Prince novella and peeked in on bakery owner Brianna. I’ve got a couple other fun collections coming up so be watching for those too :D.

Here’s the beginning of Bargains, Ballots, & the Bakery…where Brianna begins to realize maybe she can’t do it all on her own… ;)

“I’m sorry? Who are you exactly?” Brianna Masters stared at the man in front of her, unable to believe her ears.

“Then why haven’t I heard of you?” she demanded.

“Because she’s dead,” Brianna snapped. “She died over a month ago. So why should I believe she hired you over six weeks ago but didn’t leave any paperwork?”

“She was my nana.” The tears began to build behind her eyes. “She left the store to me.”

“Brianna.” He said the name as though he knew her. “She talked about you all the time.”

“She did? How well did you know her?”

Grayson leaned a hip against the display case. “I grew up in Mallard Lake Township. I’ve known her my whole life.”

“Then why have I never heard of you?” Nana hadn’t ever mentioned him, had she?

“I have no idea. I just know she told me to show up after I graduated from college. Graduation was a couple of weeks ago. My roommate’s parents took me with them on a trip as a graduation present. Now, I’m here.”

Brianna looked more closely at him and realized his eyes matched his name. Had she ever met someone whose eyes were actually gray? “I’m not sure…”

“Listen, I don’t know why Millie didn’t tell you about me, but I need the job and the place to live. Can you at least give me a shot?”

Place to live? Brianna wasn’t sure how she felt about that. “You mean the apartment?”

“Yeah. She said it would be part of my benefits, in exchange for a salary smaller than I could get elsewhere.”

“But I live in the apartment.”

“That’s a problem then, isn’t it?” His eyes twinkled as he said it.

“I guess it is.” Her mind raced to come up with a solution, but none presented itself. The brush of his hand on hers shocked her.

“Don’t worry about the apartment. I can stay with my folks for a while, but I really could use the job.”

Brianna just nodded, unable to think clearly at the continued touch of his hand on hers. “Okay. I could use some help. It’s just been me for the last week.”

“No help? Millie didn’t have someone else already?”

Brianna slid her hand out from under Grayson’s. “She did have a mom working days and a college student and teenager working nights, but they were all from the same family, and they moved the week after Nana died. I don’t know what she planned for between then and the time you arrived.
“I had a friend come help out, but she could only stay for a few weeks. She left a week ago. I’ve been managing by myself since then.” And with little sleep. She needed to sleep well and long sometime very soon. “I’ll have to look at the books and see what I can afford to pay you. I don’t know what she told you, but Nana was never the best at keeping up with them. She may have told you one thing, but whether she could have afforded it or not is something else entirely.”

“That was supposed to be part of my job. The money side of things.”

She shook her head. “I’m going to keep doing the books for now. I need to get a handle on all of it.” And ultimately decide the fate of the bakery. Would she sell it? Close it? She didn’t think she wanted to keep it for herself. Did she? It hadn’t been part of her plan.

“So what time do you want me here in the morning?”

“And when do you suppose all of that stuff gets baked?”

He gave her the most gorgeous lopsided grin she’d ever seen. “You make a very good point. Six it is then. I’ll be here.” Grayson glanced up at the clock behind the counter. “If I’m going to be here that early, I better go get my beauty sleep.”

Brianna didn’t answer. He didn’t need beauty sleep. God had certainly done something right when He made Grayson. Handsome. Polite. She’d only known him for ten minutes, but she was pretty sure he didn’t have a flaw anywhere.

Except for that. She hated that nickname, but Brianna didn’t want him to know that. Instead, she waved as he walked out the door. Time to finish cleaning up, then she could relax for a bit.
An hour later, she looked around the bakery with a satisfied smile. Finally, the place was clean again. And clean to her standards. Not just health code standards. The gleaming silver tables and machines shone under the bright lights.

She climbed the outside stairs outside and unlocked the door to her apartment. The little one bedroom place had become hers when Nana Millie died and left her the bakery building and the Victorian house a few blocks away. Brianna hadn’t had the time, energy, or emotional fortitude to start going through the house. Instead, she chose to live over the bakery in the apartment that had been unoccupied.

She tossed her keys on the counter in lieu of a table or basket, because she didn’t have any. She used stacked milk crates as a table and a folding chair she’d found in the back storeroom as her only place to sit. It didn’t matter, Brianna told herself, because she was only here for maybe an hour before bed and just long enough to get ready in the morning.

After a quick shower, she turned on the television in her bedroom and flopped down on the twin mattress lying on the box springs on the floor. She flipped to her favorite cooking show before pushing herself into a seated position. With her back to the wall, Brianna opened her laptop and input the data from the day’s sales.

For all of her baking prowess, Nana Millie wasn’t much of a business woman. Papa Kent had been the one to keep the books until he died a few months before Nana. Nana had done her best, but she hadn’t updated the books since Papa Kent died.

Brianna quickly braided her hair. The French braid wouldn’t win a beauty award, but it kept it all of her face. It was also just slanted enough for the long tail to hang over her shoulder.

Time to get some work done.

Check out the rest in Bargains, Ballots, & the Bakery – along with four other books by fantastic authors like Janice Thompson, Kathleen Y’Barbo, our own Lynette Sowell, and Traci HIlton!

Today’s Mother’s Day and we ate at our favorite BBQ place, Heady’s BBQ. What’s your favorite place to eat? Comment below, and I’ll pick one commenter for a free Kindle copy of Table for Two. 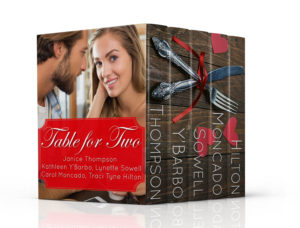 Brianna Masters inherited Millie’s Bakery from her grandmother, but running it by herself has driven her half-crazy. She receives help, but finds herself organizing Mallard Lake Township’s rummage sale and running a mayoral campaign.

Grayson Goddard returned home after college to find his friend and mentor had died and no one told him. Her beautiful granddaughter kept Millie’s promise of giving him a job. In a whirl of flying flour, he finds himself falling in love with his new boss, helping with the rummage sale and running for mayor against his high school nemesis.

Together, they work to help the town’s less fortunate through the rummage sale proceeds and end the stranglehold the mayor’s family had on the office for nearly a hundred years. No matter the outcome of the election, can they find the recipe for love?