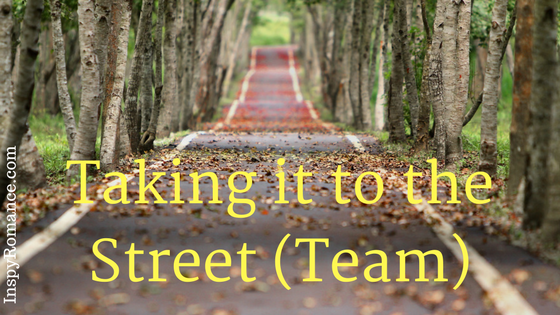 Raise your hand if you know what a street team is.

Okay, that looks like about half of you. (I totally made that up. I can’t see you. But I’m also guessing that y’all are pretty savvy readers, after all, you come here every day, so maybe I should bump up that percentage a little.) For those of you who aren’t sure, (Or maybe you think you know but you’d like a little confirmation before you keep going. Or maybe you already know but you like to hear definitions that give you a chance to say, “Yep. That’s just what I said.”), a street team is a group of people who enjoy an author’s work so much that they want to help market that author’s books.

Just about every author these days has some kind of street team. I’ve seen them split pretty evenly between being a Facebook group or a special mailing list. There are probably some authors who do both. But after that it seems like there aren’t any set parameters of what “must” be included. From what I hear, there are generally prizes (gift cards, swag, early copies of the books, etc.) available on some sort of schedule, and there are things that the authors ask their team members to do that can range from sharing a Facebook post or retweeting something to…well, anything that helps promote the book, really.

I’ve been kicking around the idea of having a street team of my own–but I’m not convinced I really know what I’d do with one, which is why, when I realized it was coming up on my turn to blog here, I thought, “Aha! I’ll ask the Inspy readers, because they are always a font of information.”

And so, that’s what I’m doing. I’d love for you to tell me about the street teams you’re a part of. How often to you have activities the author asks you to do? How often do you interact (is there a FB group and you’re in there every day hanging out and having a grand time, or is it only something that’s “activated” when the author has a new release or a question?) What sorts of prizes do you get from your street teams? (Gift cards? Book swag? Free copies of the book? Something else?) What sorts of prizes do you wish you were getting? Really…I’d love it if you’d just hit me up with all things street team.

On the flip side (because I know there are probably a few of you out there), if you’re not a street team person, what’s holding you back? Is there something you don’t care for about the idea? Or maybe you’re just too busy? Or you simply like to read and don’t want to be bothered with anything more than that? (All of these are perfectly ok – I’m just curious!)

Let’s talk street teams – I can’t wait to hear what you’ve got to say!