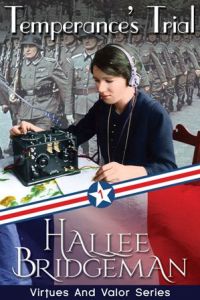 I am so excited to bring to you the first book in my serialized Virtues and Valor series! Introducing Temperance’s Trial:

The Third Reich Seeks to Extract the Information She Alone Knows

MARIE GILBERT and her elder brother flee from Vichy France after the Gestapo arrest her father for suspicion of aiding Jewish children to escape the oncoming fascist front. Once in London, Marie is recruited into an experimental all female cohort dubbed the Virtues, a collection of seven extraordinary women with highly specialized skills.

Known only by her code name, TEMPERANCE, she is trained to operate a wireless radio and returns to her beloved France. With a new identity, Marie clandestinely communicates vital intelligence directly back to Headquarters but unwillingly attracts the attention and apparent adoration of a handsome but ruthless Nazi officer, Oberleutnant LEOPOLD SCHÄFER.

As the H-hour to execute their daring mission draws ever closer, Marie plays a deadly game of cat-and-mouse with the unrelenting and merciless young Lieutenant Schäfer and the Nazi soldiers under his command.

TEMPERANCE’S TRIAL is part one of seven serialized novellas entitled the Virtues and Valor series.

In 1941 Great Britain a special war department assembles an experimental and exclusively female cohort of combat operatives. Four willing spies, a wireless radio operator, an ingenious code breaker, and a fearless pilot are each hand-picked, recruited, and trained to initiate a daring mission in Occupied France. As plans are laid to engineer the largest prison break of Allied POWs in history, the Nazis capture the Virtues’ radio operator. It will take the cohesive teamwork of the rest of the women to save her life before Berlin breaks her and brings the force of the Third Reich to bear.

Some find love, some find vengeance, and some discover the kind of strength that lives in the human heart when all they can do is rely on each other and their shared belief. Courage, faith, and valor intersect but, in the end, one pays the ultimate price.Introducing the Virtues and Valor series by Hallee Bridgeman. Seven serialized novellas, each inspired by real people and actual events, reveal the incredible story of amazing heroines facing the ultimate test of bravery. Temperance’s Trial is now available for ordering prior to the September 15th release at the following locations: