Last time we met we talked about heroes and the stuff we like to put them through. This time we’ll cover heroines and some of the challenges they present. For some reason, most writers I know lament the difficulties of creating heroines for our books. The hero we can create at the flick of a wrist. – tall, dark, handsome, and with some sort of angst in his past.

But those leading ladies are another issue entirely. Which is odd since most romance writers are female, we should have no problem whipping up a heroine like a batch of double chocolate brownies.  But we do. I don’t have a definitive explanation for you, just unscientific speculation.  Maybe the problem is that we have too much to draw from. We’re women writers and we think deep, and we’re into details, and we’re experts on emotions. How do we sort through all that and pare it down to one main character with only a few manageable issues?

The starting point for every heroine from the publishers perspective is that she must be gutsy and determined. She may be hiding those traits in the very beginning, but that good old inciting incident  will force the qualities to the front by Chapter two.

I’ve learned to start my character quest by asking this question: Who is the worst possible heroine for this hero? They have to create sparks with one another, and if she’s perfect from the start then the story will end on page three. Now I have to admit, I have a hard time being mean to my characters. I care about them, and I don’t want them to be hurt, or in trouble, or lose something important to them. I want them to be Happy! Alas, my editor does not. Her battle cry is conflict and lots of it.

I tend to overload my heroines in the early stages of development then back it down as I put the first draft together. Poor Lainie Hollings, the heroine in His Small-Town Family. When she started her life on my computer, she has lost her husband, was raising her two little girls all alone, lost her mother, lost her boss, was being hounded by a man at work, had lingering issues with her mother, was in denial about her husband’s true character, and when she comes to town to start her new job finds everyone in the town is against her.

Now since I writer for Love Inspired, I have a limited number of words. It would have taken half of them just to pull Lainie from her pile of troubles into a place where she would even notice our hunky hero let alone fall in love with him. Something had to go. I started concentrating on what would make her a poor choice for the hero. She’s a single mom. He’s a confirmed bachelor. She’s devoted to her children, he’s never been around little kids – especially little girls.

But I needed something more. Guilt is one of the issues at the top of my list. So – I made the hero the cause of her husband’s death. Ooh. It’s getting worse. But now my heroine problem was being solved. Now I knew she had to not only gutsy and determined, but she had to be a home and family kind of woman to her core to offset the hero’s no-woman-is gonna-tie-me-down attitude.

It worked out perfectly. I don’t know why the heroine is so much trouble. Maybe because we each put so much of ourselves into them. we all have a favorite type of  heroine. Mine tends to be strong but sweet and feminine. One of my friends likes the take charge kind of woman, another, the crusader.

What kind of heroines do you like? Let me know. You might see her in a future book.

I want to wish everyone a Happy Thanksgiving and in honor of Black Friday, I’m offering a special Holiday giveaway.  Two Christmas novella collections: Christmas Comes to Bethlehem, Maine, and Plantation Christmas Weddings. Leave a comment to be entered into the drawing. US only. 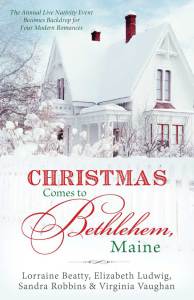 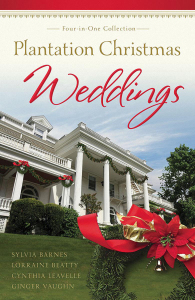