The Spencer family first came into existence when I wrote Mistletoe Kiss. I hadn’t planned to write a series, but I absolutely fell in love with the family when I was writing Chase’s story!

I normally get to know the characters before I start writing. I already knew Wade from Mistletoe Kiss—the sweet, dependable, boy next door type with almost no experience with romance. But that was only one half of the equation. What about his love interest? After all, I do write romance. 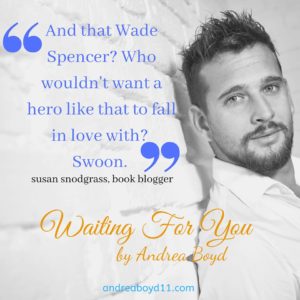 I hadn’t even named the female yet when the prologue came pouring out and Dani came to life. Abandoned by her parents to be raised by her grandparents, she married the wrong guy for the wrong reason. Despite the fact that he was abusive and a habitual cheater, she hung on so that her daughter (Piper) could be raised by both parents. But despite all her efforts to stay married, her husband divorced her.

Wade and Dani sound like complete opposites, don’t they? Sometimes that’s what we need to help us grow. 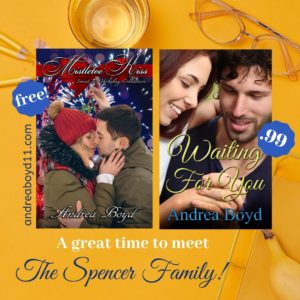 Here’s an excerpt from Waiting For You.

Wade laid a tip down on the table and then held his hand out for Piper’s. Dani followed them to the register where they ordered gelato. Just before they left the restaurant, he swung Piper up to rest on his hip and reached for Dani’s hand. Oh, she could get caught up fast in the picture they made.

They stopped at one of the picnic tables on the edge of the playground. She and Wade sat on the table, their feet planted on the bench with Piper in Wade’s lap as they ate their treat. Their talk was small, the kind that wouldn’t bend little ears.

The adults took small bites, savoring the creamy indulgence while Piper sped through her little cup in a hurry to get to the playground. Dani took care of the chocolate on her face and hands, then sent her on her way.

“You are so good with Piper. Ever think of having kids of your own someday?”

Wade stopped eating and stared at her.

Too personal? Would it be awkward if she said never mind?

“I would love to have a family someday. But I’d want to be married first and that requires dating… and stuff.” His jaw and neck had turned red. He looked out over the playground and took another bite of his gelato.

She leaned forward to look at him. “When’s the last time you’ve been on a date?”

The red moved up to his cheekbones. He cleared his throat and mumbled something.

He finally glanced at her. “I know it’s weird, but I’ve never dated before.”

He shrugged one shoulder. “Time has been a factor. I’ve always worked. And up until recently, there hasn’t been anyone I was really attracted to. I mean on more than a superficial level. Pop always said you don’t date someone you wouldn’t marry, and I guess I took it to heart. Chase too. Rae was the only one for him.”

He shook his head, but one side of his lips quirked upward. “I don’t think he lives by the same rule.”

“You said until recently.”

“Did I?” His lips formed a smile around his spoon as he took another bite.

Her heart thundered in her chest.

Did he mean me? Was that what she wanted? She’d sworn she would never date again, but—

She shoved those thoughts, along with her growing attraction to Wade back into the box they came from. With her heart still tender over the news of Tate remarrying, now wasn’t the time to even contemplate such an action.

I hope you’ll give these a try. Both books are part of our Back to School giveaway. Each comment is an entry!