My hubby and I had an odd “courtship” if you want to call it that.

We met, uh, online. Like, not match.com or anything like that. No, we did it old school.

We met in a chatroom back when they were cool.

Thankfully, he was a good guy. I was lucky, as there were a lot of creeps out there too!

Scott came to “meet” me in person for the first time over Christmas that year. He flew up there, and both of us were nervous out of our minds, as you can imagine. The full story is super hysterical looking back, but I wanted to focus on one part of the story.

You see, we had it planned out. If things when well and we both still liked each other once we met, then we would share our first kiss on Christmas Eve.

Looking back… how STUPID were we? Seriously, he came for a whole week OVER Christmas. Can you imagine how horrible it would have been if we ended up hating each other? Sharing Christmas with a stranger… ishk.

But that’s not what happened.

We, well, we liked each other. A lot.

The three days prior to Christmas that we spent every waking moment together were excruciating, as we had DETERMINED to save that kiss for Christmas Eve.

I got kisses on my forehead and my cheek. And maybe as close to my mouth as humanly possible without actually being my mouth.

So on December 23rd, 1998, we were both nervous and excited all day long. So much so, that we stayed up super late. (Yes, he was staying with us. We lived in the middle of nowhere and there were no hotels, so he bunked in my little brother’s room.)

Not Christmas Eve NIGHT as we’d originally planned, but we only had a few more days together.

My stomach was a flutter with nerves and excitement as we snuggled on the couch, looking at each other, expectant.

Then Scott excused himself.

I sat on the couch, bewildered. Had I read it all wrong? Did he change his mind at the last minute? My innocent, 17-year-old brain went into freak-out mode.

Until a few moments later, when he returned, grabbed my hand and pulled me up into his arms, covered my cheeks with his hands, and kissed me.

The faint taste of fresh mint met my lips.

I’d love to say it was the most spectacular amazing kiss I’d ever have. And, well, it had been, since it was the ONLY one. But it was a bit clumsy, a bit silly, a bit crazy. But it was ours. 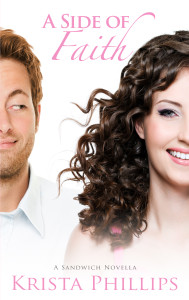 We, uh, may or may not reenact said kiss every year since. The next year we were happily married, and the year after that, we were cuddling with our newborn baby.

We obviously got that kissing thing down pretty quickly!

So anyone else want to share their first kiss story???

I’m running a promotion on my book, “A Side of Faith” through New Year’s Eve! It’s #dollardecember and you can get the ebook version for only $1.00! (also available in paperback)

Also, follow the hashtag to find other #dollardecember book deals!