This week marks the end of a year long journey with a family who has become very special to me. Yes, I know, they’re fictional :) but as an author, characters very often become all too real to me as I tell their stories to my readers. As the sixth (& last!) book in my HOME TO COLLINGSWORTH series is released, I thought I’d take this opportunity to share a bit about how this series came about.

My first series (THOSE KARLSSON BOYS) was about three brothers, and I had loved writing the family dynamic. Because of that when I started to think about an idea for my next series, I knew I wanted it to be another family one. And even though I have no sisters of my own, I decided this time around it would be a series about sisters. Slowly over time, the series idea came to me. There would be six sisters all named for flowers: Jessamine, Violet, Laurel, Camilla, Lily and Rose. These sisters would have been raised with their wealthy grandmother because their mother hadn’t wanted—or been able—to care for them. Some came as babies, others were a little older, so each would have a different relationship with their grandmother and different memories of their mother.

Once that idea kind of gelled in my head, I sat back and went…no, no one is going to buy that. I mean, really? Six daughters and each one abandoned by their mother? How realistic was that? So I started to reconsider my idea. Then one night as I was watching a documentary on TV, there, before my eyes, was a story so very similar to mine that I was shocked. And filled with delight! There it was—proof that my idea for this series wasn’t so farfetched after all. Though my idea wasn’t exactly the same as the documentary, enough of it was for me to feel that even if my series premise wasn’t a common one, it was possible one. Once I had that validation, I started working on fleshing out their characters. 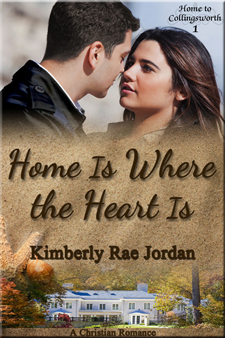 First up was Violet – second oldest sister and the first to leave Collingsworth (they are part of the founding family). The inspiration for the sort of person she was came from a blog I follow written by a woman who lived her life without putting down any deep roots. So who better to pair Violet with than a firmly rooted man. The sheriff. Writing her story – HOME IS WHERE THE HEART IS—brought to light the first of several unexpected turns the series would take. I won’t reveal it here, but that particular revelation helped flesh out the story for book two. (I should note here that when I say unexpected twists, I don’t just mean for the reader. I mean that I was merrily writing along and suddenly BOOM—unexpected twist! It usually resulted in me sitting there going, say whaaaat? lol)

When I started to plan out HOME AWAY FROM HOME (book 2), I knew that Laurel (3rd oldest) was already married. That presented me with a bit of a challenge. It wasn’t a marriage of convenience 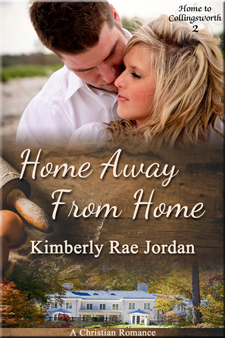 story, but actually had a couple of who married out of love. How do you write a romance that readers will enjoy when the couple are already married and in love? When her story finally came to me, I knew it would be an emotional journey not just for her, but her husband, Matt. She couldn’t give up the one thing he couldn’t accept. Promises they’d made to each other, even before they were married, could no longer be kept. And so began the conflict and the journey of their story. Another unexpected turn showed up as Laurel and her sisters try to come to terms with their grandmother’s death and the terms of her will. As family dynamics changed, not only within Laurel’s marriage but with her sisters, I was excited to continue the series and see what else lay ahead for this family. 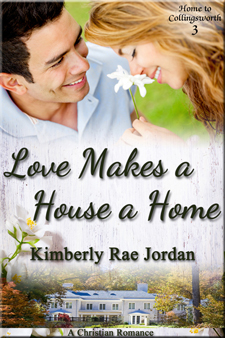 Writing Jessa’s story (LOVE MAKES A HOUSE A HOME) was fun. I was able to incorporate an interest I had—gardening—along with understanding the role she played in the family as the firstborn. She had struggled under the weight of the responsibility their grandmother placed on her in the years before her death. She also had a more difficult time dealing with the twists and turns their lives had taken since Julia Collingsworth died. The responsibility she feels not just for her sisters but for the family name helps her understand her grandmother’s actions more than her sisters are able to. But will she cave in to the pressures the way her grandmother did and resort to secrets and lies to protect those she loves? A former love is hoping he can help her see a different way.

By the time I got to Cami’s story, I knew I had my work cut out for me. I was pretty sure that because of how I’d written her 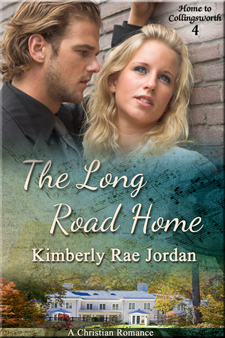 earlier in the series, most readers would not be looking forward to this book. And it was supposed to be the last book of the series. Way to go out with a fizzle, eh? THE LONG ROAD HOME was a hard story to write. Both Josh and Cami had things in their pasts that had shaped them into the people they were when they first came together. One was a very public sin and the other a very private one. Both had left them feeling unworthy of God’s love as well as love from others. Though most my stories are about Christians and their daily spiritual walk along with the struggles and triumphs of their faith, I knew from the start that Cami hadn’t chosen that path. I wanted her journey to Christ to be realistic even as Josh struggled to find his way back to the faith of his younger years. I loved these characters, and their story is one of my favorites to date.

Because I don’t utilize beta readers, the first real reader (aside from my editor) of my work is whoever downloads and reads it first. I held my breath waiting for that first review, first email or Facebook comment that would let me know how THE LONG ROAD HOME was received. Surprisingly enough—or maybe not!—this book has garnered the most positive reviews. One reviewer even shared how they hadn’t wanted to read the book because of how they felt about Cami from previous books, but since they’d read the other books in the series they went ahead and got it. Once they read THE LONG ROAD HOME, Cami’s story became their favorite!

In the midst of writing Cami’s story, I began to get requests for stories of the other two siblings, even though it hadn’t been part of my plan to write them. It wasn’t too hard to convince me, however. I found that I wasn’t quite ready to leave Collingsworth just yet. 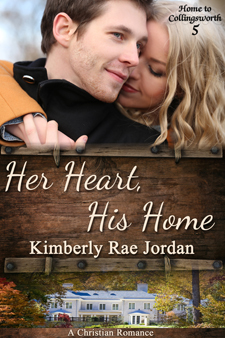 Will’s story was fun to write, particularly because it was stepping back into the lives of the Collingsworth family several years down the road. Both Will and Amy thought they knew God’s plan for their lives, but circumstances unfolded differently and left them wondering why God had failed them. Sometimes it is a struggle to accept things that seem to divert us from God’s “perfect plan” when in fact, His plan and His timing are so much better than what we may have thought it would be. HER HEART, HIS HOME brings the family back to Collingsworth at a time when they need to be together to support one of their own through a difficult period.

Lily’s story picks up just days after HER HEART, HIS HOME ends. When we first met Lily, she was a young eighteen year old who was just starting to date a man named Nate. With everything going on 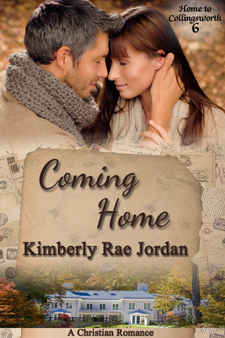 because of her grandmother’s death and the events that followed, Lily kind of got lost in the shuffle. Seven years later, she’s engaged to Nate but receives some news that sends her running from him and her family. Her story begins three years after her departure as she decides it’s time to go home to Collingsworth. Though she’s had three years to adjust to the necessary changes in her life, Lily’s biggest fear is becoming a burden to those she loves. While her family and Nate struggle to understand and accept the differences in her and in the way she lives her life, she is forced to lean on them in ways she never wanted to.

Lily’s story is available now! For a limited time, you can download COMING HOME for just $.99. And if you haven’t yet started this series, you have the perfect opportunity to pick up book 1 – HOME IS WHERE THE HEART IS –along with 6 other books in the LOVE BRINGS US HOME boxed set for just $.99! (Also for a limited time!) 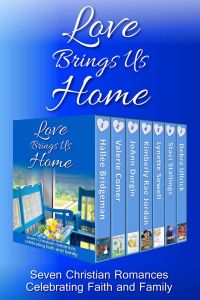 It’s been a blessing to write each of these stories. To be able to weave the lessons the Lord has taught me over the years into the lives of these characters. And just like in real life, the strength of each character’s faith was different, and therefore their spiritual journey and lessons learned throughout their story was unique. My prayer for each story I write has always been that when the reader finishes reading it they are encouraged and uplifted not just by the Happily Ever After each reader wants in a romance, but also by the spiritual journey each character has taken.

As I say goodbye (at least for now) to Collingsworth and this family that I’ve so enjoyed spending the last year with, I hope that readers will join me next year as we begin a new adventure together. I plan to reveal more details on my Facebook page closer to the end of December. Join me there if you’d like to find out what 2015 holds for my writing!