Jada glanced at him and then toward the dark waters. “No.”

He cursed under his breath. After turning off the light, he moved away from her toward the rear of the boat. He yanked two life vests from the seat opposite of where she’d found the blanket. “Fold the blanket and return it to the storage box, please.”

She did as he asked, confused. Why did the blanket matter?

She stared at the orange vest, but then took it from him. After putting her arms in the holes, she buckled it in place. “What–”

He pulled a rope from the compartment and headed in her direction.

Fear skittered up her spine, but then reason returned. If he meant to harm her, he wouldn’t have handed her a life vest. He tied the rope around her chest, looping it through the loose sections of the nylon straps.

He tied a loop in the other end and dropped it over his head and under one arm, like a purse strap. “We’ll jump together. The water is very cold and will take your breath away at first. It is super important that you relax and turn to rest on your back as quickly as you can. I can pull you, but you can’t fight me or we’ll both be in trouble. Okay?”

“Are you sure about this?”

“We don’t have a choice.” He took the keys from the boats ignition and clipped them to his belt loop. After turning off all of the lights, he waited a moment.

Just as her eyes were beginning to adjust to the darkness, he pulled her into his arms. “You’re going to have to trust me to get us both to shore. Okay?”

“Yes. You’ve kept me safe this far. I trust you, even though it’s not logical.”

“Good.” He touched his lips to hers. “Man, you taste so good.” After another too-short kiss, he tugged her to the edge of the boat. “On three, we jump together.”

“As soon as you reach the surface, turn so you’re floating on your back. One…two…three.”

They jumped. Frigid water surrounded her, and she struggled to remember what Peter had just said. She felt a tug on the rope, and his words came back to her. Turning onto her back, the pull increased until it was a steady tightness.

What seemed like hours later, her bottom touched mud. Peter was a little further on shore on his hands and knees, gasping for breath. She crawled up next to him. “Are you okay?”

“Yes.” He helped her unbuckle the life vest and get it off. “We have to carry these for a little while. Leaving them here will only let our pursuers know where we landed. I’m hoping my friend’s boat will follow the current enough to send them in the wrong direction.” 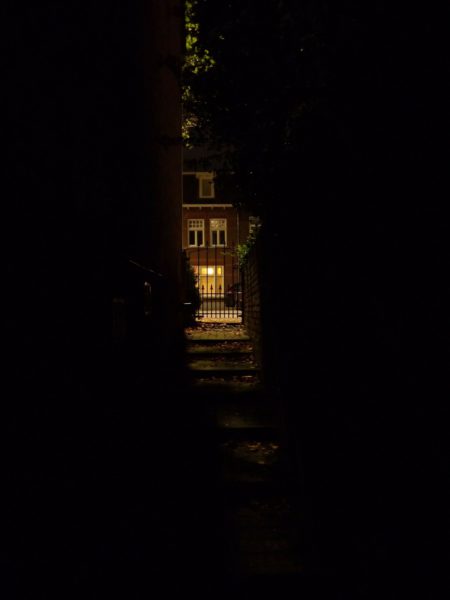 She shivered and nodded. That explained his care for the craft. For the next several hours, she followed him through back alleys and behind buildings where no light penetrated the darkness. Finally, they reached a building and stopped. A frown pulled his brows together. “My mother should not be awake.”

Jada glanced up. A light shone from the window above. “Maybe she’s waiting up for you.”

Fear filled her, and she grabbed his arm. “No. Please don’t leave me out here alone.”

They took the stairs to the second floor. Peter opened the apartment door slowly. Jada stayed close behind him. “Mom. What’s going on?”

A man sat beside a woman Jada assumed was his mother. “Ms. Scrimpton has put word out on the street that she wants her jewels back, and she doesn’t care if you’re dead or alive when it happens. What have you done?”

“I retrieved what is yours.” He took a bag from under his jacket. “Why is he here?”

“Nice to see you again, Peter. I’m just looking out for your mother. This prank has put you back on Ms. S’s radar. She’s looking for both you and your mother. I didn’t want anything to happen to either of you.” His gaze turned to Jada. “And you are?”

Peter pulled her forward. “Jada, this is Detective Chance. He helped us find this place after our house burned.”

She nodded. “My name is Jada Broughton, former maid for Ms. Scrimpton.”

“And how did you come to be in Peter’s company.”

“She came in the room while I was retrieving our property. I made her come with me.”

“I’m not. My life was about to take a turn for the worse, so I decided Peter might offer a better choice for my future.”

The man’s eyes narrowed. “And what do you know about Ms. Scrimpton’s business?”

Jada smiled for the first time in years. “Quite a lot. I’ve lived there since I was a small child, though I didn’t understand what I was seeing until a few years ago.”

“Would you be willing to give us some details that might make it easier to put your boss behind bars?”

“But first, we need a safe place to stay. All of us,” Peter said.

“The jury finds Magdalena Scrimpton guilty of all charges, Your Honor.”

Peter and Jada watched the court proceedings from a secure location. Detective Chance had kept his word and made sure the three of them remained safe during the last nine months. Tomorrow, they would all leave with new names, a little money, and a place to stay far from here. She rested her hand on her slightly rounded belly. Their child would finally be safe.

The detective had decided  to retire early and would marry Peter’s mother this afternoon, so they could remain together.

Jada smiled at her mother-in-law. The four of them would live together for a time, but then she and Peter would move into their own house. When Jada looked at her husband, he smiled down at her. “Are you still glad you came with me that night?”

“More glad than you’ll ever know. I love you, Peter.”

“I love you, too.” His kiss showed his feelings far more than any words could have.