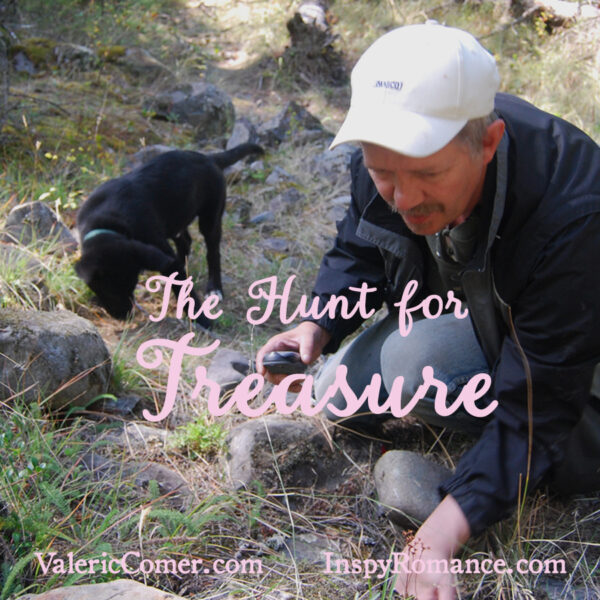 Ever been geocaching? My husband and I first heard about this real-world treasure hunt in 2008. Back then, you needed a dedicated GPS (global positioning system) handheld to find the coordinates listed on a website (usually geocaching.com). (Now most smart phones have this capability.) Then, when you zeroed in on the coordinates, you’d find a small, weatherproof container with a log book where you could sign in to prove you’d found the cache.

In the header image, Jim is hunting a geocache with the help of our puppy, Brody, who is now an old, sluggish, thirteen-year-old! But he was an eager helper back then. In the one below, Past Valerie is getting a good look at some ancient pictographs. Can you see the red marks on the rocks? And yes, there’s a geocache nearby! 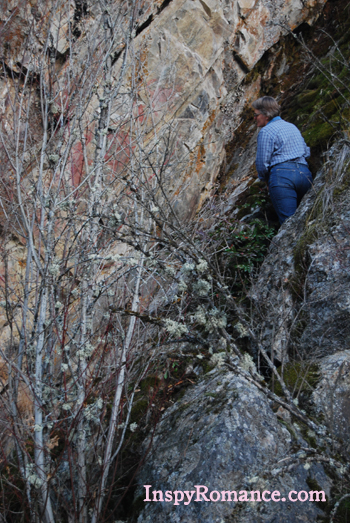 We did a lot of geocaching for several years. It got us doing something fun together outside, something with a purpose. We discovered several new-to-us landmarks in the area, such as these pictographs.

In late 2010, Barbour Publishing put out a call for four-author anthologies in their Romancing America line. I chatted with a friend about how fun it would be to put together a geocaching romance collection. Before I knew it, she’d pulled two others in. We created a proposal, submitted it, and sold it. (You can read all the hyperbole here!)

In the summer of 2011, I wrote what would become Topaz Treasure, and it released in Rainbow’s End on May 1, 2012. I was on cloud nine! I had an agent! I had a contract! I was going places! As you can imagine, there’s an entire life story that took place between then and my unregretted decision to publish independently two years later, but that’s not the topic of today’s post.

Rainbow’s End sold reasonably well and got some great reviews but, as is the way with traditional publishing, it went out-of-print five years later. The other authors and I briefly discussed working together to republish and turn it into a series, but that didn’t happen.

I just couldn’t see republishing one little novella out into the world by its lonesome, but then I had a heart attack and then got sidetracked writing cowboys, and poor Topaz Treasure sat languishing on my hard drive… until I was invited to Love’s Treasure, a multi-author box set due to release on June 15th.

And now, like magic (haha!!!!) Topaz Treasure is the first in a four-book series, releasing from May through August in a brand-new Pot of Gold Geocaching Romance series. Topaz Treasure has been lengthened from 20,000 words to about 27,000 words. It’s been moved from Osage Beach, Missouri, to Jewel Lake, Montana, now taking place in the same “world” as the Cavanagh Cowboys Romance series.

I’m delighted that Topaz Treasure will be back out on Kindles everywhere in only ten days. Although I wrote the first draft of Raspberries and Vinegar before writing this one (to say nothing of half a dozen practice manuscripts)Topaz Treasure was the first to see the light of day, and so it will always hold a special place in my heart. 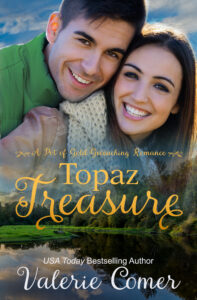 Closet believer Lyssa Quinn steps out of her comfort zone to help coordinate the Pot of Gold Treasure Hunt her church is using as an outreach event. She’s not expecting her former humanities prof — young, handsome, anti-Christian Kirk Kennedy — to be in Jewel Lake at all, let alone in a position to provide sponsorship to the geocaching event, but how can she trust someone who once shredded her best friend’s faith?

Kirk’s treasure hunt takes him down a path he hadn’t intended as he searches for opportunities to connect with Lyssa and her intriguing sparkle. How can he convince her there is more than one kind of treasure? And how can she introduce him to the greatest prize of all? 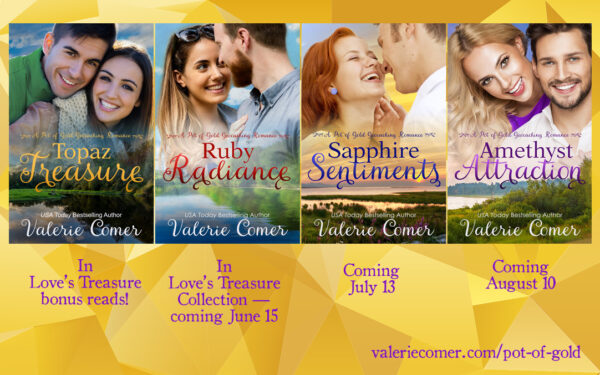 All Pot of Gold Geocaching Romance titles are now available for pre-order on Amazon.

Tell me! What’s the best treasure you’ve ever searched for… and found?