I was in primary (elementary) school when the iconic Aussie movie, The Man from Snowy River,  was released in 1982. At the time it was the highest grossing Australian movie at the box office, overtaken a few years later by the smash hit Crocodile Dundee.

I watched The Man from Snowy River  for the first time on television, and I fell in love with the Snowy Mountains setting. I grew up on the northern beaches in Sydney, with ocean views from my childhood home, but I’ve always been fascinated by mountains. My husband has despaired that I’ve refused to consider buying property in an area that doesn’t have hills, lol.

The Man from Snowy River  movie is based on a famous Australian poem by the same name. It was published in 1895 by Banjo Paterson. I was never a big fan of poetry, but I loved Banjo Paterson’s poems because they were often humorous and told a story. The Man from Snowy River  is an Aussie bush ballad, and the words can be found here. Banjo Paterson’s most famous poem is the bush ballad and song Waltzing Matilda, often referred to as our unofficial Australian national anthem.

The Man from Snowy River  movie is a romance, set in the late 1800’s. Our hero, Jim Craig, is trying to catch ‘the colt from Old Regret’, and gain the respect of the high country men. Jim wants to run his late father’s farm, in the high country near Mt. Kosciusko. He works on a farm in the low lands and falls in love with our heroine, Jessica. A prized colt disappears, and Clancy of the Overflow (who features in another Banjo Paterson poem) leads a roundup of the wild horses (known as brumbies).

My interest in the movie and the Snowy Mountains setting only increased when, in my late teens, I was introduced to Tom Burlinson (the actor of Jim Craig) by a customer at the bank where I worked in a northern Sydney suburb. He was lovely, and it was normal to meet celebrities where I worked. This was back in the day before internet banking, when everyone had to actually go inside a bank to deposit and withdraw money.

A few years later I married my husband, Jay. We travelled to the south-western slopes of New South Wales (the north-western side of the Snowy Mountains) to stay with his family who owned apple orchards. I love this part of the world, and the seed of inspiration for Falling for the Farmer,  my debut novel, was born during a visit to the apple farms. I pondered the question: What if a pampered city girl was stuck living and working on an apple farm?

The second book in the series, The Nurse’s Perfect Match,  is a May 2014 release. The third book, The Doctor’s Return,  will release in August 2014. The books are set in the fictitious town of Snowgum Creek, near the Snowy Mountains.

I’m giving away a print copy of The Nurse’s Perfect Match  (worldwide, wherever The Book Depository delivers) to a reader who leaves a comment on this post and enters the Rafflecopter giveaway. 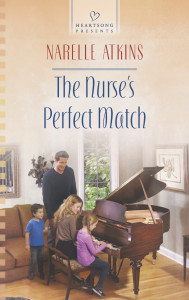 After her marriage ends in tragedy, Amy returns to Snowgum Creek to rebuild her life. There she meets widower Ben Morton, who’s not looking for romance, though his young children are eager for Amy’s attention. She’s given up on her dream of being a mother, but can’t ignore how she’s drawn to Ben’s little ones, and to their handsome farmer dad.

As love kindles between Ben and Amy, she worries how she’ll ever measure up to the wife he lost. And Ben is concerned about how Amy will ever truly fit into life on the farm. They could be the answer to each other’s prayers—if the secret Amy is keeping doesn’t tear them apart.

Have you seen The Man from Snowy River  movie? Or, visited Australia? If you could visit anywhere in Australia, what would be your number one destination? I’d love to hear your thoughts.