The Making of an Unlikely Rock Star Romance Writer! 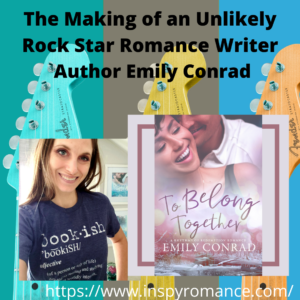 Thank you for having me! If you met me, I doubt you’d walk away thinking, “I bet she writes about rock stars.” Laughing, I’ll admit I’m just not that cool.

Yet, my Rhythms of Redemption Romances follow the rock band Awestruck. Lead singer Gannon starred in To Bring You Back, and up next is John, Gannon’s best friend and the band’s drummer, in To Belong Together.

So how did a quiet, bookish person like me take an interest in writing about musicians? In high school, I had friends who were into music and attended concerts and Christian music festivals.

I was intrigued by lyrics that addressed the conflict between the public persona and the human behind the performances. The idea of a normal girl being noticed by someone famous also drew me. Wouldn’t it be amazing to be picked out of the crowd and swept into a fairytale romance?

And so, the rock star stories started to pile up.

As time went on, I did end up marrying a drummer (for my church worship team), but I left my interest in rock star stories behind for “more serious” plotlines. It wasn’t until a period of disillusionment years later that I picked the rock stars back up.

While I hoped for a fairytale escape, I also longed to write meaningful fiction that explored meaty topics. Writing rock star romance for Christian readers offered an opportunity to merge both.

But, by then, I was thoroughly bookish and more aware that I didn’t have the knowledge or experience to imagine the lives of the men of chosen to be heroes for my stories. So, what’s a bookish writer to do?

First, I turned to the most obvious resource: books! 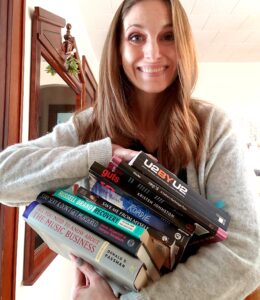 A stack of non-fiction books taught me about the music industry, fame, life on the road, and addiction and recovery. (Though if you choose to read some of the books pictured, use your discretion, as most of them aren’t Christian.)

I also read Christian fiction centered around musicians. Some standouts include:

The Trouble with Love by Toni Shiloh

One More Song to Sing by Lindsay Harrel

Come to Me Again by Leah Atwood

I also had the pleasure of trading manuscripts for feedback with rock star romance writer Anne Carol, author of the Faithfully Yours series.

Penning lyrics for my band meant applying lessons on word choice and cadence from college poetry classes. When I wondered if a lyric had a workable rhythm, my drummer husband solved my problem by belting out my words to the tune of a song that was in heavy rotation on the radio.

Did all this transform me from the bookish introvert into the kind of person you’d peg as a rock star romance writer? Maybe not. I’m probably still not cool enough, and I’m still sometimes entranced by idea of being picked out of the crowd.

That longing to be special and chosen lurks in so many of our hearts, doesn’t it? But here’s something I have learned: we are each special to Someone famous.

Jesus Christ has the name above all names, and He died that we might have a relationship with Him. Our feelings of not being cool enough or of longing for the validation of being chosen and loved are a reminder to turn again to our famous friend and savior, Jesus. From bookish authors to famous rock stars, we all need God, and the grace, hope, and belonging we can only find in Him.

So maybe it doesn’t matter so much if you peg me as a rock star romance writer. My aspiration is that instead, when someone meets me, they’d walk away thinking, “I bet she writes about grace.”

I love this, Emily!! Thank you so much for your wise words :)

Here’s a little more about To Belong Together and how to connect with Emily! 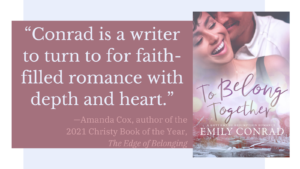 Fame and money have a way of complicating love.

Drummer John Kennedy can keep a beat, but he can’t hold a conversation, so he relies on actions to show he cares. Unfortunately, when he’s instantly intrigued by a spunky female mechanic, he can’t seem to convey the sincerity of his intentions. And the rejections don’t stop there. His own sister is pushing him away just when he could help her most.

Erin Hirsh’s life would be easier if God hadn’t given her a love for cars. Only her father understood her, and she’s losing him to dementia. Her brief romances have always backfired worse than a mistuned engine, and she refuses to give John the chance to wreck her heart. A rock star with a supermodel ex can’t possibly see anything in her.

At least that’s what she thinks until they find common ground in faith and their worsening family situations leave them each longing for a place to belong. Could God intend for this pair of opposites to belong together?

To Belong Together is the second novel in the Rhythms of Redemption Romances. It’s available from most major online retailers, and until it’s release, you can pre-order for the discounted price of $2.99.

Do you have any inspirational romances with musicians you’d recommend?