This past weekend I attended a wedding.

I know, lots of people attend weddings. Most people do get married. But this last wedding was special. Aside from the fact that the groom was one of the trumpet players in my jazz band, it was the most romantic wedding I’ve ever seen. 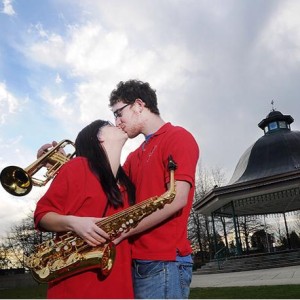 Here is a photo of the bride and groom (prewedding photo). As you can see by his trumpet and her saxaphone they are both musicians. These two are among the most serious band geeks I’ve ever met. Both are in multiple bands, both play multiple instruments, and of course, they met at a band related function. I think they play together in only one band.

I knew a lot of the people in attendance from the bands I’m in or have been in over the years. Yes, I have been in a band with the bride at one time as well.

The way they incorporated the way they met, and so many friends and relatives (parents are also huge band geeks as well, I’ve been in a band with Amanda’s mother) most of the people there were musicians.

There are a lot of love songs going to be played in the coming days over this. I might even play a few.

Gail Sattler is the award winning author of over 30 novels and novellas, with more coming! Gail lives in Vancouver, BC where you don't have to shovel rain, with her husband, 3 sons, 2 dogs, and a lizard who is quite cuddly for a reptile. Besides being a writer, Gail plays bass for a local jazz band, and acoustic bass for a community orchestra. When she's not writing or making music, Gail likes to sit back with a hot coffee to enjoy a book written by someone else.