What Good Friday & Easter Sunday Teach Us about

You probably have never thought about this.  In fact, I only realized it a couple weeks ago and I’ve been reading and writing and viewing people’s stories for many, many years.  But I think it’s interesting so I’m going to share with you what I am learning about writing, reading, and life.

Now I think I’m beginning to understand why.

The other day I heard this quote:  “Death does not win.”

When I read it, I was reeling from the death of someone who had died far too young, with so much left to give to the world.  It sure looked like death had won, but then as I thought about it and read through some comments of others reacting to the statement, I came to understand the paradox that we all live in.  To us, in this world, it looks like death wins.

I’m not just talking about physical death either.  I’m talking about the death of our dreams, the death of our hope, the death of everything we thought would bring us joy and happiness.  Look around you, you will see what I mean.  There’s the young bride who loses her husband in a freak car accident.  The young soldier who comes home crippled.  The child stricken with cancer.  The church that burns. The man who loses his family in his desperate attempts to provide for them.

Over and over you see this pattern played out.  People pushed to and past their limits.  People grieving for a past they can’t go back and fix.  People who are in a living death because moving on is either too difficult or too painful.  It is the story of life itself.

If the story ends there, we begin to believe that death does win, that the bad things are just too much for the good things to ever have a chance.  And if you stay there, in that belief, you’re in serious trouble. I’ve seen what hopelessness will do in a life, and it’s not pretty.

But here’s the thing:  I am beginning to understand that all of this death stuff is simply Good Friday.  Think about it, on Good Friday, it looked like death had won.  Jesus, the Son of God, was hung on a cross and killed.  I’m sure his followers and loved ones knew what hopelessness felt like at that moment when Jesus said, “Father, into Your hands I commend My Spirit.”  Don’t you? I’m sure “despair” would only have been the starting place for what they felt.

Now if that was the end of the story, death would have won.  Game, set , match done and over forever.

However, we as Christians know that wasn’t the end!  Think about the great gift we have been given of knowing that as horrifically bad as Good Friday was, that wasn’t the end of the story!  Because no matter how bad Good Friday is in a life, Easter Sunday is still coming!  No matter how bad things get, death doesn’t win. Life wins.  Love wins. God wins.  And if we believe and follow Him, we win too!

So what does all of this have to do with writing Christian romance novels?

You see, I don’t just see this pattern in lives around me. I see it in my stories.  The guy who was on drugs but who is trying for a new life and the Good Fridays he goes through of letting himself, his will, his plans go in favor of what God wants for him.

Or maybe it’s the guy who has everything but is holding secrets he’s never told anyone.  Why?  Because giving them up would be dying to the self of perfection.  However, as we read through his story, death of self gives rise to… hope and more joy than he could ever have known holding onto all the stuff God was trying to get him to let go of.

And then there’s the young girl stuck behind her books who thinks life is so much safer when no one knows she’s on the planet.  As you read her story, you come to the understanding that it was only in dying to who she thought she had to be that she comes into who she was always meant to be.  The caterpillar’s metamorphosis into the butterfly.  Good Friday giving way to Easter Sunday.

These and so many, many more!

Think about this pattern in your own life.  What have you had to die to, lay down, surrender in order to get to Easter Sunday (or what might you need to give up, lay down, and surrender)?  For me, it was perfectionism and working to get everyone to approve of me.  It is different for everyone, but I’m convinced now that no matter who you are, the pattern holds.  The choice is clear:  Stay stuck in the grief, guilt, sorrow and pain of Good Friday or give your spirit to God and move in to Easter Sunday.

See how “The Pattern” plays out for yourself for FREE 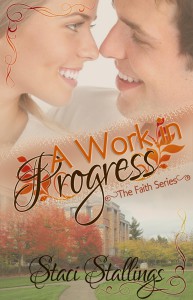