I’ve been thinking a good bit about romance lately — about lighthearted romances, angst-filled romances, married romances. The last one has been on my mind because I’m still working through the rough draft on my next book which deals with a married couple.

While my style tends to be more reality-driven fiction, which means there’s lots of drama and the occasional need for a tissue, there are still some fun, flirty moments. And I thought I’d share one of my favorite scenes between my main characters in Kept. 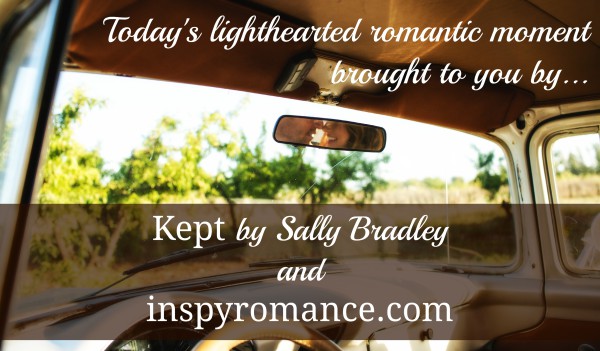 To set the stage, Miska and Dillan are at a church’s singles’ shindig (say that three times fast) on Memorial Day and are playing on opposite teams in an impromptu Frisbee soccer game. They’re not dating — and Miska isn’t even a Christian yet, so Dillan, a ridiculously tall assistant pastor, is doing just about everything he can to treat her right and not flirt with her. ‘Cause she’s got some issues he’s witnessed firsthand. But here, in this scene, in this moment… It gets fun. :)

They jogged farther down the field. Dillan’s team kept the Frisbee near her goal, and Miska and Dillan stopped to catch their breath. Behind the trees on the far side of the park, the sky began to turn pink and lavender. She squinted at the occasional ray of light that jumped between swaying leaves and tried to blind her.

Somewhere someone was grilling. “Smell that?” she asked.

He pointed behind them. “It’s coming from over there.”

She looked but couldn’t find the source. When she turned back, Dillan was yards ahead of her, sprinting for the Frisbee heading their way.

“Dillan!” She chased him.

The Frisbee stayed up, and Dillan leaped high into the air, nabbing the edge and pulling it into his palm. He landed hard on his feet, almost falling to his knees as she skidded to a stop. He flung his arm out for balance.

Two of his teammates stood alone by her team’s goal. Once he stood—

Miska leaped onto his back.

He laughed beneath her. “Uh, foul.”

She wrapped her arms around his neck, her legs around his waist. “Drop the Frisbee and no one gets hurt.”

People began to laugh and cheer. Someone wolf-whistled.

“Miska.” Dillan coughed. Laughed. “Get off.” He twisted, his left arm coming back to his chest to fling the Frisbee.

Miska lunged over his shoulder for it.

He laughed again, straightening. “Are you serious?”

She slipped. With a yelp, she tightened her hold around his neck, one hand grabbing a fistful of shirt.

He stumbled back a step.

Safely on his back again, she made another grab for the Frisbee.

“Please.” Amusement tinged his voice. He held the Frisbee out, way beyond her reach.

“No fair. Your arms are like six feet long.”

Across the field laughter grew. Jordan flopped onto the grass, an arm across her stomach, while Garrett watched with his hands on his hips. “Let me have it, Dillan. You’re making a scene.”

“Watch me,” he said and started to run.

She jerked backwards. Her mouth flew open, and she grabbed his shoulders. “Dillan!”

His long legs ate up the distance. Miska hung on, each fist clenching the front of his shirt, each step jouncing her up and down. She pressed her cheek against the side of his head, his hair cushioning her jaw. They passed everyone until only one man stood between them and the goal.

Dillan leaned over the shorter guy’s head and tossed the Frisbee in.

Miska slid off his back and landed in a heap on the ground. Dillan high-fived Cam, then turned to her, a grin across his face. He offered her a hand up.

She swatted it away. “You cheated.”

On her feet, she flipped her hair over her shoulder. “You weren’t, I’m sure. There’s not enough oxygen up there. How are you even alive?”

Dillan pointed toward his ear, his chest heaving beneath his crumpled Cubs T-shirt. “You’ve got grass in your hair.”

She ran her fingers over her curls. “Did I get it?”

“No, it’s still—” He brought his hand closer. “You’re right below it.”

She shook her head, moved her hand up. “Here?”

Her hair gave beneath his fingers, a curl separating his skin from hers. And then his fingers were in front of her, a blade of grass—brown and jagged at one end—in his hand. He tossed it to the ground. “There.”

“Don’t think so.” He checked both sides of her head. “You’re good.” He took a step toward the center of the field, and Miska fell in beside him, seeing the Frisbee take off at the other end.

Cam said something to a guy who glanced over his shoulder at her and Dillan.

“Why does everyone keep looking at us?” she asked.

“While we were eating and just now. Every time I look up, guys are watching us.”

He shrugged. “Got me.” He eased into a jog and began to leave her behind.

“What are you doing?”

“Playing defense.” He smirked over his shoulder. “I’ll explain it to you some time.” 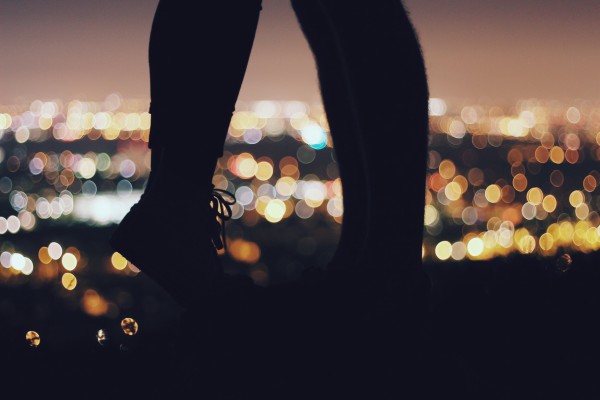 I tell you, readers, I caught myself grinning from ear to ear every time I worked on this scene. I hope you enjoyed it as much as I did. And as I write this, Amazon has the ebook on sale for $1.99! They’re controlling this sale so I have no idea when it’ll end. So if you’re interested… and like a little flirty, angsty, reality-driven fiction, check out the Amazon reviews and read the sample.

As always, I love hearing from you! Anyone have a fun, flirty moment to share? Or a favorite scene from a recent book? No need to post the scene, but do give us the author and title and fill us in on the details!