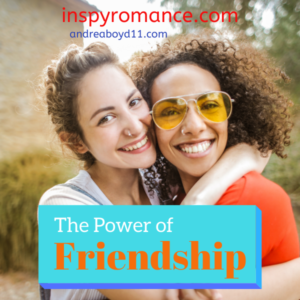 A man that hath friends must show himself friendly: and there is a friend that sticketh closer than a brother. Proverbs 18:24

A friend I’ve had since high school called me yesterday afternoon to let me know that she would be providing supper for me and my husband. You have no idea what a blessing that was.

I won’t lie, it’s been rough lately. For over a month now, I’ve been going with my husband four days a week to dialysis so I can learn how to administer it at home. In addition to dealing with that, his body has been trying to reject the liver he got five years ago.

I already had friendship on my mind before my friend’s supper offer came through. You’ve probably seen posts from Toni Shiloh and Jaycee Weaver about the collection of Christmas wedding stories we released along with Mikal Dawn and Teresa Tysinger titled Something Borrowed. 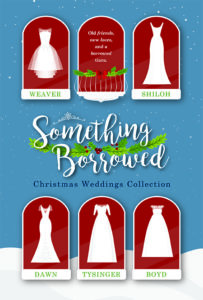 It’s about six college roommates’ journey down the aisle toward happily ever after and is tied together by a tiara that is passed from one bride to another. It wasn’t one of those projects where we each wrote our separate stories and then sent it on its way to be added into one collective book. There was a lot of collaborating between authors. Some of the friends ended up being mentioned in multiple stories.

Something happened along the way as we connected these stories together. We five authors formed a friendship. And I don’t mean the superficial type of friendship either. I mean the type where we stay in contact on a weekly and sometimes daily basis. The type where we share each other’s burdens and pray together. We share our joys too, which uplifts each of us through these trying times.

Unlike the friend who provided supper for me last night, I’ve never met these author friends in person, but that makes them no less real. I’m sure you have made connections both in person and on the internet. Here’s your chance to brag about how they have blessed your life. Use the comment section to give a shoutout to one of your friends.