A few weeks,  my publisher let me solicit input on a title for my novel releasing fall of next year. 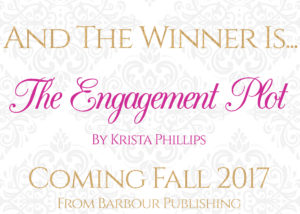 It was a close “race” with The Engagement Ruse coming in just behind Plot. but between the votes here and the ones on my Facebook page, the winner was clear!

I thoroughly enjoyed reading everyone’s comments, and one question/thought that came up a few times between the two front-running titles was the idea of deception. Some LIKED Ruse because of that– and others expressed concern about a book centered around a lie.

It got me thinking of the idea of “sin” in books. I think almost all of us who read Christian books agree there are lines in fiction that shouldn’t be crossed when writing for the Christian market. There is a “trust” my readers have that they won’t read my book and be slammed with curse words or graphic sex–and that sin won’t be glorified.

But those are pretty clear things for me–I believe Jesus dwells inside me in the form of the Holy Spirit, and I’m not going to cuss or type out a graphic sex scene because that would be a sin for ME. Jesus had called me to NOT do those things in my writing, and this trumps the desire of readers and will every single time.

However… that doesn’t mean my characters won’t sin. They are humans (uh, in a fictional sense anyway) and aren’t perfect. If they were, there would be no conflict thus no book!

So going back to the title discussion, I’ll be very upfront.

My book indeed does involve one big, fat, very large deception (aka LIE) by none other than my hero and heroine.

But the decision to NOT use the word “ruse” has nothing to do wanting to steer away from the idea of the lie.

Because the lie is there and not going anywhere.

Lying is a sin. One of the ten commandments, even. Yet it’s a common struggle, isn’t it? It’s easy to let someone believe something and not correct them if it eases our situation. Or to twist a truth in our favor and justify the means with the end.

And sometimes, even as believers in Jesus, we wonder away from the path God has called us to, sometimes in a very slow meandering that catches us by surprise, and in turn, sin has a way of inching its way into our lives without our knowledge until we start to see the impact.

This is where my heroine is at. And the “lie” becomes another symptom of a much bigger issue in her life–a stagnant faith in God that she’s allowed to get dusty and dormant.

My hope and prayer is that, while you hopefully will have some giggles along the way and have a fun story that is a good respite from your day, you’ll also be encouraged to take a look at your own journey with Jesus and be encouraged and even challenged to dig deeper with Jesus.

What are your thoughts on “sin” in fiction? Are you looking for fiction that doesn’t depict sin, or more realistic fiction that deals with topics of sin and redemption? And if you’re REALLY willing to share, has God ever used a book to point out an area in your life that you weren’t completely trusting God with, or pointed out a sin in your life that you’d been struggling with?

(Please note — if the idea of a lie being displayed in the plot of a fictional book is a huge bummer for you — IT IS OKAY!!! We are all in different spots in our faith and have different tastes in books. I totally respect your opinion and love you still!!)