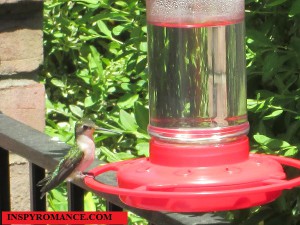 Apart from the warmer temperatures, my favorite thing about spring is the much anticipated return of our hummingbirds. Anyone who knows me will attest to the fact that I love my hummers.

I’ve been known to spend several hours outside, dressed in red shorts and a red t-shirt, next to the feeder, in order to capture a photograph of one of God’s magnificent creations. In time, they grow accustomed to my presence. Often they’ll come investigate my camera, since it’s also red. 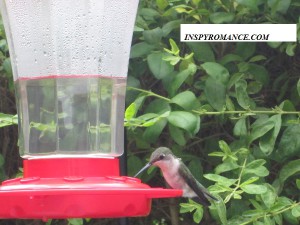 The most common hummingbird in the Carolinas is the Ruby-throated Hummingbird. They’re also the smallest bird. A hummingbird can rotate their wings in a circle, allowing them to be the only bird that can fly backwards, up, down, sideways or stay perfectly still in space.

For such a tiny creature, these birds use more energy, and eat constantly, despite weighing only 2 to 3 grams.  If we ate as much as a hummingbird, we would have to eat around 30,000 calories a day. They must eat late into the night and be early risers in the morning because if they sleep too long, they could starve to death.

The hummingbird has the largest heart in proportion to its body. It pumps 200 beats per minute at rest and 1000 during flight. They expend a huge amount of energy on their down and upstroke, so they must stay fortified. Nectar, from certain flowers, is their primary source of food. We mix sugar and water in our feeders. The sweeter the juice, the more exciting and acrobatic the wars become.

The aggressive behavior is typically strong in early summer when the birds claim their territory and defend their nests. Hummingbirds are intensely territorial when it comes to their feeding source. They appear to be the most angry and selfish well into the fall, as they fight for their prime feeding territory, in preparation for migration. These ill-tempered birds can be amazing to witness as they battle to maintain control of the feeder.

Sharing doesn’t come easy to these little guys. In fact, these feisty, delicate creatures have no concept of sharing. If another bird dares a quick sip at the feeder, while one is already drinking, he’ll make his move. In a split second, he swoops out of the sky and rams him off the feeder. They’re absolutely incredible creatures. If you want to add some excitement to your backyard, hang a hummingbird feeder or two and watch the wars begin.

What’s your favorite thing about spring?

By day, Jill Weatherholt works for the City of Charlotte. At night, and on the weekend, she writes contemporary stories about love, faith and forgiveness for Harlequin Love Inspired. Raised in the suburbs of Washington, D.C., she now resides in Charlotte, North Carolina, but her heart belongs to Virginia. She holds a degree in Psychology from George Mason University and Paralegal Studies Certification from Duke University. She shares her life with her real-life hero and number one supporter. Their relationship grew on the golf course, and now they have one in their backyard. Jill believes in enjoying every moment of this journey because God has everything under control.