When my husband first asked if I was okay with him buying a Harley, I said, “Honey, I’m a romance writer.” Meaning, “Yes.”

First of all, he’d supported my dreams of writing, so I wanted to support his dream of riding.

Secondly, I thought riding a motorcycle would be like I’d written it in my books. Sam rides a Harley in the Resort to Love Series. Beau rides a Harley in The Princess and the P.I. I imagined us riding up into the mountains for breakfast with my hair flying behind me but never getting tangled. Basically, I’d romanticized the idea. 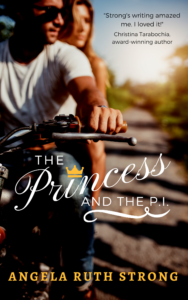 I didn’t know that Jim would grow a long gray beard, and he’d want me to take my own class to learn to ride, and the other women we rode with would be tough dump truck drivers. I didn’t know we’d go on nine-day rides and stay in hotels where they’d try to rent our group a cabin with dead cats underneath. I didn’t know there would be days so hot that we’d buy vests just to soak in cold water so we didn’t die of heat exhaustion. I didn’t know people at rest stops would say things like, “I hate bikers.”

I also didn’t know how inspiring it would be or that I’d have hours of uninterrupted daydreaming time. I came back from our trip to Utah with new characters, a plot, AND a plot twist. 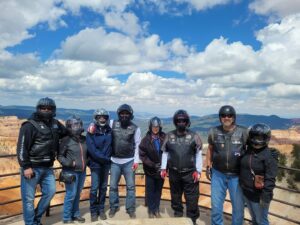 See, one of the bikers I met is named “Crazy Bob.” In the 1960s, he had five daughters born by five different mothers within the span of one month. When I heard this, I immediately wondered what life was like for his daughters. Did they know they were related? Did they go to the same school? Did their moms hate each other?

After I told people this idea for a story, they often said, “Well, that can’t be Christian fiction.” But why not? Christianity is about redemption. So I began pondering… 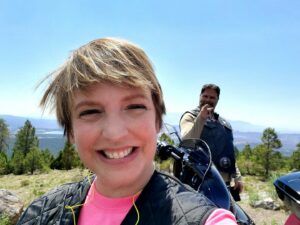 I pondered while at a Memorial Ride for riders from our motorcycle club of police officers and fire fighters. I began thinking that the Crazy Bob character could have been a cop who infiltrated a biker gang for the FBI. If he went into the witness protection program with girlfriend #5 to protect their baby, he might never have known about his first four daughters. But he could have found out about them years later when he looked up his first true love on Facebook. They would have broken up because he’d been shot by a biker gang for being on their turf. When the FBI asked him to go undercover, she said she couldn’t stay with him knowing he could die any day, but he said he couldn’t live with himself if he didn’t do what he could to prevent others from getting hurt.

After the breakup and during his month as a “prospect” in the gang, he went a little dark and gave into his lust and loneliness. He felt horrible when he found out he left four daughters behind. He wanted to reach out, but he discovered they all thought they were better off without him. On his deathbed, he confessed to the biker nicknamed “Chaplain” and said he wanted to will his Harley to the granddaughter of his first love under the condition that she went on the Memorial Ride with Chaplain. She was a reporter, and he thought that if she went on the ride, she’d start digging into the truth about his past and tell all his daughters that he never meant to leave them. That he’d only wanted to make the world a better place by putting a lot of criminals in jail.

Thus, this book becomes a time-split novel. Tori has her own financial issues that force her to go on a ride to inherit the Harley. She never realized meeting Chaplain and learning about Crazy Bob would affect her own life. 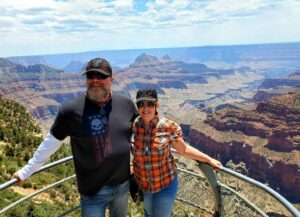 This isn’t the normal romance I write, but when I mentioned it to my reading group, they loved the idea. Then I went on my ride to The Grand Canyon, and the story grew even larger in my heart. There is so much symbolism with the way water creates rock formations. It’s also the wild west, which fits riding iron steeds. And with the tangible presence of Mormonism in Utah, it would be weird NOT to discuss religion/baptism/confession.

I’m not sure where this will fall in my lineup of books I want to write, but it’s been fun to look up stories of undercover FBI agents in past biker gangs. My hubby is interested in this too, so I’ve been reading articles out loud to him, and he’s been weighing in. I wouldn’t mind doing more riding research either. Though we rode through Utah for nine days, there was still SO MUCH MORE to see. 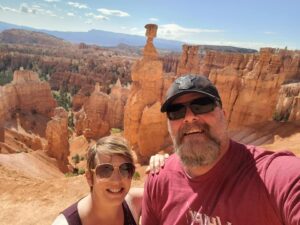 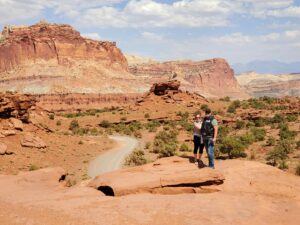 What are your thoughts on motorcycles? Have you ridden? Do you know someone who rides? Do you have any bad experiences? Or are motorcycles romanticized in your mind the way they were in mine?

Answer one of the questions above, then if you want to see how I’ve written about motorcycles in the past, you can get download The Princess and the P.I. for FREE here.

When my husband first asked if I was okay with him buying a Harley, I said, “Honey, I’m a romance writer.” Meaning, “Yes.”

After I told people this idea for a story, they often said, “Well, that can’t be Christian fiction.” But why not? Christianity is about redemption.

What are your thoughts on motorcycles? Do you have any bad experiences? Or are motorcycles romanticized in your mind the way they were in mine?