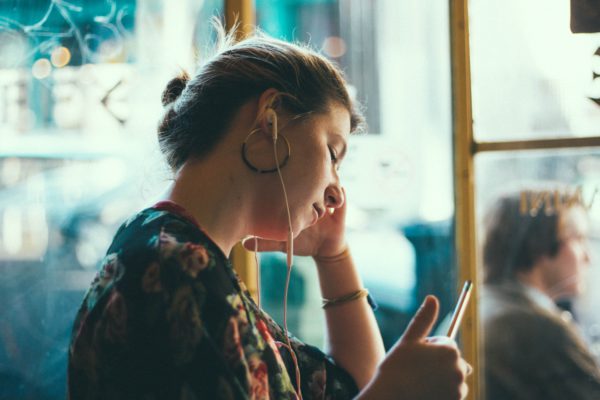 Photo by Siddharth Bhogra on Unsplash

Okay, confession time. I’ve never been an audio book listener. (See?) Back in high school, I remember listening to a couple Agatha Christie audiobooks while doing chores. It sure made ironing a whole lot more fun.

But I’m a faaaast reader. Super fast. That might be my super power. So audiobooks never quite caught on for me. But now that one of my own books is in audio and now that I’ve gone through the making of one, I can see how audiobooks could be awesome!

There’ve been a few posts on Inspy Romance on the whole process, so I won’t go into that. But I will say that it was a very eye-opening experience. So many audiobooks are done in almost a monotone fashion — very little emotion in the narrator’s voice. Or a woman in her fifties narrates a book that’s from the point of view of a twenty-year-old. That always throws me off.

But times and styles have changed. Now, sometimes, an audiobook can have a male and a female narrator. Have you listened to one like that? I had a couple audition for my book and considered working with them, but while I liked her style, I didn’t care for his. It’s hard enough to find a narrator you’re happy with; I think finding a couple that you’re happy with is even harder. 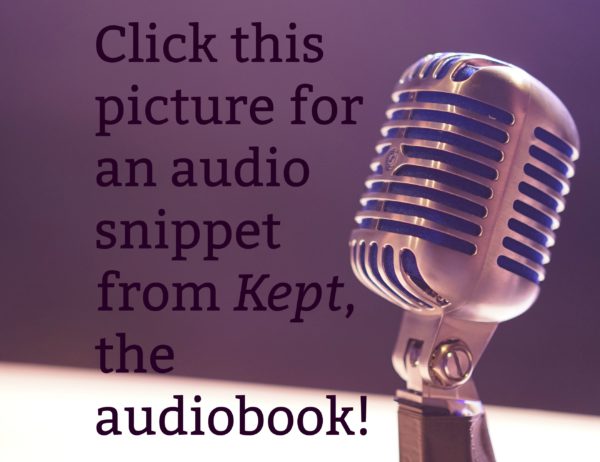 Photo by Matt Botsford on Unsplash

My book received well over thirty auditions, and some cracked me up. For example, one audition was just excellent. She sounded the right age; she put some emotion and drama into it — and then she said something in a very British accent! What? My books are set in Chicago. My characters are Chicagoans! What’s with the British slip there? I checked her info, and sure enough — she was from England. Yet she could almost nail an American accent. Almost!

Others would do voices so well — and then suddenly a new character would sound completely obnoxious! Or nasally (which is also not pleasant, right?). I let my kids listen to some of the auditions, and we had a good laugh at voices that suddenly went haywire. My book had a lot of characters, which made it challenging for a narrator to do them all well and yet distinguish one character from the other. That was the second biggest aspect I looked for, right after being able to put a touch of drama into the reading.

The narrator I worked with turned out to be a native Chicagoan. As well as a native Tennessean. She was a child actor/singer and spent her life going back and forth between the two locales. So she could nail a Chicago accent, as well as a Southern drawl. Natalie, my narrator, is a professional voice-over actress who has done a lot of audiobooks and a whole lot of commercials, many of which you’ve probably seen. I spent some time on her website and realized that, yep, I remembered that Laughing Cow cheese commercial. And even the Be Like Mike (Michael Jordan) commercials she was in as a kid.

Working with Natalie was honestly easier than finding the right narrator. Once we had our contract set, she got to work, mostly on the weekends, and cranked out chapters one right after the other. Honestly, I don’t know how she did it and stayed sane. She worked loooong hours, and at one point she did have to take a break because her voice was starting to give out. 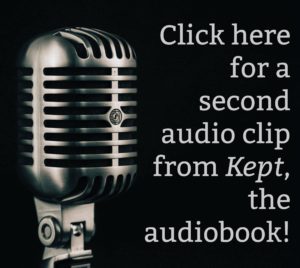 Photo by Claus Grunstaudl on Unsplash

But the finished product is one I’m super pleased with. Yes, it’s very awkward at first, listening to my story being told by another voice. I don’t know why, but it is. But when I give myself a couple minutes of listening to get past it, I’m really thrilled with what she did. And, as the book goes on, my narrator gets even better and better and better.

What book is this? Glad you asked, haha. It’s Kept, my debut novel that has been so well received. Right now the book has 522 reviews on Amazon, and 80% of them are 5 stars. If you already own the ebook, you can buy the audio book for $7.49. Which is a fantastic price for over 13 hours of listening! And you can go back and forth between reading and listening. That’s a pretty cool perk of buying both from Amazon. 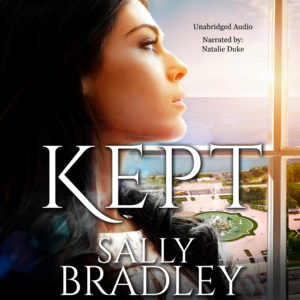 If you’ve never tried Audible before, you can get Kept free as your first book. That’s not a shabby price either, is it? Can’t beat that!

If you haven’t been able to get the ebook since it’s only on Amazon right now, you can buy the audiobook from iTunes as well. (I’m on a PC, so I hope that link works for those of you on Apple products.) Now there are all kinds of ways to get your hands on Kept! Which makes me super happy as an author.

I hope you’ll give Kept, the audio book, a try. And would you mind sharing this post wherever you like to get social? I’d love to see the audiobook take off and introduce a whole new segment of readers to Kept and its characters.

Now for a giveaway, which I think I’ve done only once this year! Two commenters will win a total of 3 print books from me. One will win any one of my three books — Kept, Taken: A Kept Novella, or Homestands (Book 1 in the Chicago Wind series) plus another one of those three to give to a friend. I’ll even mail the other book separately to the friend if that would be easier. Another winner will win one of those three books for yourself. The contest will go through midnight on Friday, Central time. The winners will be announced in the Sunday blog.

I’d love to hear that you’ve shared this post or the title of the last audiobook you listened to. I’ve been cleaning my house to my audiobook, and that has made the job a lot more fun. Now that my kids are older, I’m thinking a good audiobook is a lot more likely to be in my future. How about you?