Hi everyone! Hallee here. Normally, I’d talk about something inspirational or romantic to go with the theme of the blog, but today I’ve decided to get a little up close and personal with you.

For years I blogged as Hallee the Homemaker, and my children kind of grew up in the “public” blogging eye. I blogged wide-open, letting my readers experience the dynamics of my family as if they stood in my living room day after day. But, once I left that homemaking blog almost a year ago, I quit writing about my children. My blog posts became about me (not my favorite subject) or my books or writing my different genres. 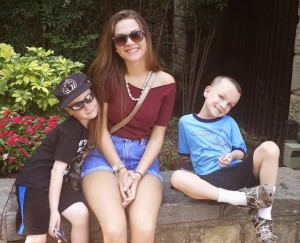 Recently, however, I wrote about one of my sons.  For those of you who don’t know this side of me, my husband and I have three amazing children. Our daughter, Kaylee, is the oldest at 18. She’s vivacious, clever, and loves Jesus. She is an easy girl to adore.

Our youngest is our 7-year-old son named Johnathan Eugene — we call him JEB because those are his initials. He is often found toting a Samurai sword and making battle sounds as he swings it. He defines precocious and has been described by his pediatrician as “scary smart.”

Our middle son is 9-year-old Scott. He was a 30-week, 3-pound preemie. He is THE sweetest, most loving child on this planet. I had a friend over this morning and within an hour of her sitting down, he was in her lap. Scott is brilliant on levels I can’t even comprehend. This year, he was diagnosed with:

Autism Spectrum Disorder manifested by issues in reading and auditory comprehension,  issues in interpersonal relationships, and issues in sensory processing with an above average raw intelligence

I recently wrote about an experience in a restaurant and posted it on my blog. Within hours, the post went viral, and I heard this week that Yahoo will be putting it on their news site.

Here is the post if you would like to read it: An Open Letter to the Waitress at Steak N Shake

As a blogger since 2009, I have to tell you that there is often a dream of a blog post going viral. Hallee the Homemaker’s “Homemade Fabric Softener” went viral on Pinterest one time. I had 10,000 hits on that blog within a few hours and that was a lot of fun and kind of silly. 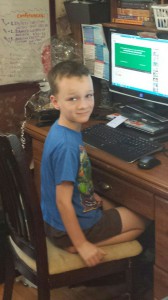 Scott watching previews while I typed this blog post

But this post was deeply personal and touched the hearts of so many people. Talk radio hosts read it, major blogs reposted it, I’ve received countless feedback from it, and now it’s going to Yahoo. People have said over and over again how nice it was to hear good reports from a restaurant instead of bad. Steak N Shake contacted me and thanked me for the post. The HR department left a comment on the post this morning.

It’s been an amazing experience. Scott has no idea of the lives he touched through me writing this blog. As I’ve typed this blog post, he’s interrupted me about 16 times to show me previews of the upcoming Secret Lives of Pets interspersed with previews of Inside Out. Life to him is completely normal and nothing changed. But, maybe, somewhere through the tens of thousands of sharing that the post generated, someone’s life was a little bit brighter.

It’s difficult to say what blog post will create a popular appeal. Why would homemade fabric softener go viral? Was it an attempt by fed up Americans wanting to save money and get back to simpler things? Maybe. Maybe the idea that fabric softener can be made with 2 ingredients appealed with such simplicity.

Okay. But, why would a letter to a waitress in a small restaurant in Central Kentucky go viral?

Why? Reading the comments and the feedback, I think it’s because our media outlets are so flooded with bad news and bad people: terrorists, murderers, thugs, and villains dominate the media outlets. There’s an old saying that, “if it bleeds it leads.”

Instead of bleeding, I thanked a waitress for having a heart. Wouldn’t it be nice if most of the news was about heart and the goodness of people and Christian values?