Always a bridesmaid. That’s café owner Kaylee Kinney’s problem. But she’s a businesslike go-getter, so she makes a vow to marry within a year… and buckles down to achieve her goal. 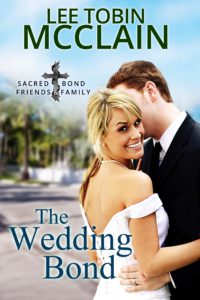 Enter U.S. Army Ranger Phelan O’Donnell. Sure, he broke her heart once, but she’s much tougher now. She’ll practice her relationship skills with Phelan while scoping out the scene for a nice, manageable man to marry.

Hey Kaylee… how’s that working for you?

I’m excited to let you know about the release of my latest novel, The Wedding Bond. Yes, there are actually three weddings in the book! I’m calling it a Sacred Bond Standalone, because it’s related to the rest of the Sacred Bond series, but it stands alone well. Like all the other books on InspyRomance, it’s contemporary Christian romance. But it’s a bit of a departure for me because it has a lighter, more humorous feeling. Don’t worry, though: I worked in some of my trademark angst as well!

Here’s an excerpt from chapter one:

“Yes, Kaylee’s the only one of our sorority sisters who hasn’t found that special someone,” the bride continued. “She’s still playing around, breaking hearts, living the carefree single life . . .”

Kaylee’s cheeks burned and she couldn’t help sneaking a glance at Phelan. His curious expression made her stomach do an odd flip.

She had always thought of her single status as indicative of her independence and fun-loving nature. Now as she looked away from Phelan and saw her family’s indulgent smiles, being single suddenly morphed from fun to pathetic. Like she was still a child in need of the protection and advice her brothers so loved to give; or even worse, like she’d never gotten over her high-school sweetheart.

“Give me one year,” she heard herself announce.

Do you know anyone who was in a lot of weddings before she got married? Were you? Comment before midnight tonight for a chance to win a $10 Amazon gift card.