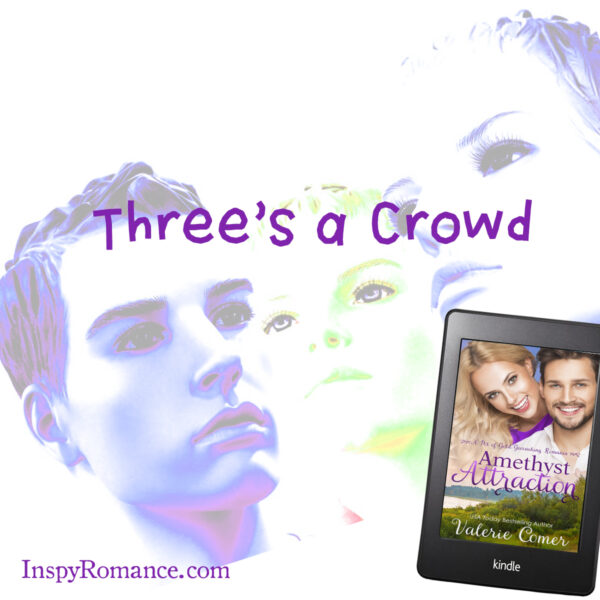 Raise your hand if you’re a fan of love triangles in romance novels! Anyone? Anywhere? Thank you, I see that hand way over there. And you, brave soul — thanks. But most of you are sitting there with your arms crossed over your chests, shaking your heads.

It’s often so very obvious which girl he should pick, right? (It’ll make sense why I’m going with this scenario instead of the reverse. Trust me.) As readers, we can see that one is cheating on him or that she’s completely unsuitable for some other reason. Why is he drawn to the catty one in the first place? What does he even see in her for five seconds?

And then there’s the fact that most (not all, but most) romances are written in the points-of-view of both the hero and heroine, so it’s not like it’s going to be a surprise with whom he ends up. We know. And he should, too, because otherwise he’s just dumb. It’s so obvious.

Go ahead. Wrap your brain around that.

This is what I decided to do in Amethyst Attraction, the fourth and final Pot of Gold Geocaching Romance, which releases… today. (Blink.)

Eli Bryson is the youth pastor at Creekside Fellowship in my fictional town of Jewel Lake, Montana. He had a rough upbringing, but Jesus found him and called him. Eli absolutely loves what he does. Loves shooting baskets with the teens and taking the guys on campouts. And he’s the mastermind behind the annual Pot of Gold Treasure Hunt, a church outreach event.

Also, Eli would love to get married. As a pastor, he knows the kind of wife he needs. Someone like the head elder’s daughter, Stephanie. There is nothing not to like about Stephanie. She loves Jesus, she loves the teens, and she leads Bible studies. It doesn’t hurt that she’s pretty and meek. She doesn’t rev Eli’s heart, but that might come. A guy can hope.

Who is all wrong for him? Harper Satterfield, the privileged daughter of the town’s wealthy benefactors. She’ll be around for the summer, heading up the new marina project her dad has invested in. Eli has only met Harper twice before this, but he can’t get her out of his mind. There are so many reasons why Harper is the wrong woman for him that Eli decides to take matters into his own hands. How?

He decides to date Stephanie and fall in love with her before Harper actually moves to Jewel Lake. Then he can get Harper out of his mind and everything will be great. Right?

Not so fast, Eli! First, Harper and Stephanie are going to be best friends. That’s going to be awkward! And then… well… 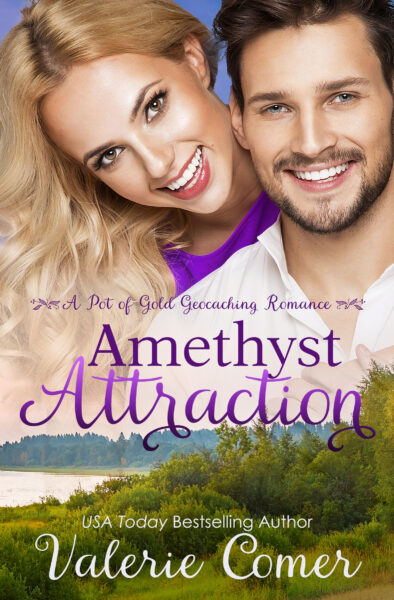 When youth pastor Eli Bryson realizes he’s attracted to an unattainable visitor to town, he vows to put her out of his mind and starts dating the perfectly attractive daughter of a church elder. But try as he might, falling in love with the right woman isn’t in his power.

Harper Satterfield is in Jewel Lake, Montana, for the summer, supervising the new marina her dad’s company is constructing. Needing to fill her time, she volunteers to run the church office part-time to cover for the regular receptionist. Seeing Eli’s spiritual side daily will cure her unlikely crush on the hot pastor. Except it doesn’t.

How can the annual Pot of Gold Geocaching Hunt prove to both Eli and Harper that true treasure might be found where they least expect it?

Turns out I liked Stephanie so well that she’ll get her own story down the road! Not in the Pot of Gold Geocaching Romance series, since it’s now complete, but I’ve got more plans for Jewel Lake.

Amethyst Attraction released this morning and is now available in Amazon stores around the world as an ebook. It’s also ready to download via Kindle Unlimited. Enjoy!