My family loves hot wings.  That perfect combination of heat, crisp, and protein.  Mm, my mouth waters just thinking about them.

The bone-in vs. boneless debate is a popular one in our family.  Personally, I always preferred the bone-in wings.  Until age thirty.  That’s when I realized wing sauce smeared all over my face didn’t exactly make me attractive.  Somehow it never bothered me before then.  There must be something magical about thirty that starts a woman to pondering such things.

A sane person might argue that I could eat more delicately and not end up with wing sauce on my chin, cheeks, and nose.  I’m afraid I’d have to laugh at that person, though.  (As I tend to do at most generally sane people.)  Only someone who hasn’t met me and my less-than-graceful ways would ever say such a silly thing. 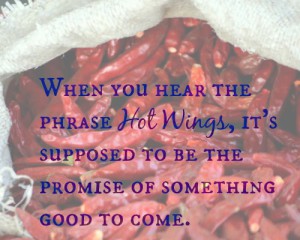 Not too long ago I decided to make wings at home for the family.  Mm-mm, good.  Right?  Only, somebody had used the last of the Louisiana Hot Sauce (our go-to for wings) without telling me.

So, the hot sauce was all gone, but I’d already started cooking dinner.  We were having wings, and that’s all there was to it.  (I’m flexible like that.)  Then brilliance struck me.

I had a new hot sauce in the fridge that I’d been hearing great things about.  It smelled a bit like our usual wing sauce.  It was more or less the right color.  The consistency was a little off, but surely that would change once it got in the pan and warmed up…right?

So I drowned my chicken in this new hot sauce.  Dinner was going to be delicious.  I served it up and waited for my husband to take the first bite. Which he did.

Then his face turned fire-engine red.

Sweat popped out on his forehead, cheeks, and neck.

Meanwhile, our teenage son hungrily took a bite.  And started choking.  My husband – who still hadn’t even tried to chew the chunk of meat burning through the interior of his mouth like lava through a rubber tree – held a bottle of water out to him.

Apparently slathering chicken in Sriracha sauce until it’s dripping off isn’t quite the same thing as having hot wings.

This got me to thinking about the way I talk to people and how I represent Jesus in the books I write.

My first book (Mail Order Man) is a bit…uh…what’s a delicate way to put it?  Preachy.  It’s a bit preachy.  I have readers who love it and readers who prefer my later books.  Granted, I was going through some personal stuff when I wrote that book.  Some of the preaching in the pages is me working through things with God.  It was my first book, too, so I can cut myself a little slack.  But still, it’s a wee bit over the top.

Because I can never think of one thing and simply leave it at that, though, I followed the logic train to the next stop.  Does the Bible say anything about being too preachy?

You’re going to laugh when you see the verse I ended up at.

“You are the salt of the earth.  But if the salt should lose its taste, how can it be made salty?  It’s no longer good for anything but to be thrown out and trampled on by men.” (Matthew 5:13 HCSB)

Right?  It had to be verse with a food reference, didn’t it?  But keep reading.

“You are the light of the world.  A city situated on a hill cannot be hidden.  No one lights a lamp and puts it under a basket, but rather on a lampstand, and it gives light for all who are in the house.” (vv 14-15)

I’ll tell you what I concluded.  Then you tell me what you think. 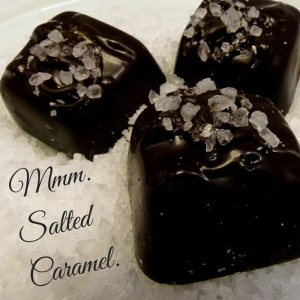 Salt is this amazing compound that triggers the taste buds on your tongue to more fully experience the flavors in your mouth.  Salt kind of locks those taste buds into the “open” position so that you can savor the taste.  That’s why we now have salted caramels – because that salt helps you to more fully enjoy the caramel.  What would happen, though, if you were making a batch of twelve caramels and you dumped a cup of salt into the mix?

Nobody would come back for seconds, right?

Salt is a good and necessary part of our diets, but too much is bad for us.  High blood pressure is one side-effect of too much salt.  So is water retention.  (Just look at my ankles the day after I’ve eaten potato chips.)

Food with no salt is…blech.  But food with too much salt?  It doesn’t just taste bad.  It’s dangerous.

And what about the lamp?  If you light a lamp, you’re going to put it on the lampstand, right?  Obviously!  But are you going to buy a five-food-wide spotlight for your dining room so guests can see what they’re eating when they come over?  No.  Your light needs to shine so the world can see, but you shouldn’t make a point of flashing it in people’s eyes and blinding them. 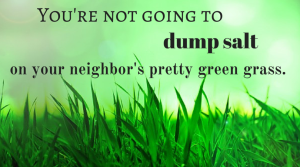 Be salt and sprinkle yourself into the lives of those around you.  It’s not just a command of God – it’s a joy, a privilege, and a blessing.  Their lives will be richer for it.  But don’t go around throwing salt blocks into your neighbor’s yards.  It’ll kill their grass and might just push them to want nothing to do with you or the God of the Bible that you represent.

Don’t get me wrong.  When it comes to God, we should be all in.  We should be salty, and we should shine brightly.  We just don’t want to become so overpowering that we’re like that mouthful of Sriracha – where one brief encounter makes people desperate to escape us by any means necessary.

In case you were wondering – my husband never did swallow his chicken.  Napkins are handy tools in times of need.  And my son?  He was choking on the heat, not the meat.  He managed to swallow his, but he takes teeny tiny bites, and he went through a LOT of water.

So what do you think?  Can we overdo it in our Christian fiction?  What about real life?  Where’s the right balance?