The word trope has also come to be used for describing commonly recurring literary and rhetorical devices, motifs or clichés in creative works. -Wikipedia 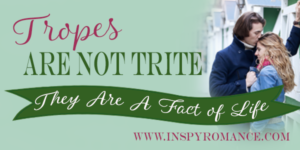 When I first learned about tropes, I thought they were something to avoid at all cost. Then I noticed many titles in genres that I write for mention tropes. I realized that readers, and authors, have been embracing tropes from some time–whether they realized it or not.

So, let’s take a moment to discuss what a trope is.

Basically, it’s a tried and true storyline, worldbuilding, character type that we see again and again. You might not readily recognize a peasant girl meets the prince trope because every writer puts their own spin on a story. Have you ever played a group game where you are given the name of a character, maybe a setting and a story problem and told to make up a quick story. Each story will be different! Because we are all different.

That’s why when an author uses a common trope, you might not recognize it right away.

I drive my family up the wall when we are watching movies. Ten minutes in and I’ll start with: “Oh, this is an enemy to lovers story. They might hate each other now, but in about a half hour, they’ll be together. You’ll see.” Ha.

And usually, I can guess pretty close to what might happen. (Being a writer has, in a way, ruined watching movies and reading books for me. I can instinctively pick up on where the story is probably going because I’ve studied so much on plotting and common storylines.) But I’m getting off track.

(Which wouldn’t happen, if I’d plotted out this article before I started writing.)

So, back to tropes and your favorite stories. I’m curious to know if you have any favorites? Such as, do you like a fish out of water type of story? Or the enemies to friends? How about a marriage of convenience, which has spurred many Mail-Order-Bride books and more contemporary stories as well. Do you like second chance romances? (I do, and I’ve written a few.)

Comment below and let me know what’s your binge-worthy type of romances?

I’ll pick someone from the comments below to win a copy of my unexpected single-parent story – Blessed Gifts from the Lavender Vale Farm Series. 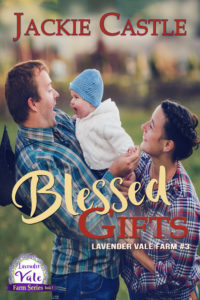 Ben wasn’t sure if he was father material. Then in a stopped heartbeat, he became a single parent.
Benjamin Brown wasn’t proud of his mistakes, but he did intend to try to step up and do what was right, even if the baby’s mother wanted nothing to do with him. When the delivery goes bad, Ben is left holding his son with no idea of how to take care of a baby’s basic needs.

Lively Lilly has a plan.
Ben’s mother, Lilly, takes him to his sister’s farm in Thistle Texas. There is nothing for miles around except fields of lavender, gardens of produce, and an ornery old goose.
However, his sisters Faye and Melanie promised to help Ben get back on his feet. Unfortunately, he fears that he’s slowly sinking in the mud.

Olivia Canales wants out.
She has outgrown her family home and nagging/interfering mother. She wants her own place, but jobs in town are few and far between. Besides, she loves working on her best friend’s Lavender Farm and Faye has promised her full-time work once they get everything going and open up to visitors.

When Faye’s brother shows up with a baby he has no idea how to take care of, Olivia’s heart goes out to his dilemma. The deceased mother’s parents show up and give Ben an out his problem: They will raise the baby, but only if he gives up all his rights.

Ben doesn’t want to lose his son but desperately needs help so he can finish his last semester of college.

Olivia agrees only to end up going in deeper than she ever anticipated.

All of the Lavender Vale stories are free on Kindle Unlimited!