When my very first book released (Love is a Battlefield from the Walk in the Park series), I encountered something shocking. There were people who assumed the book was autobiographical. 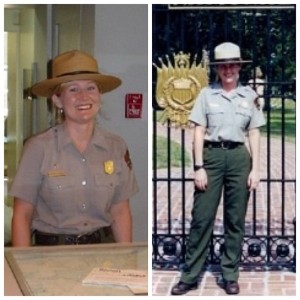 My park ranger days inspired the Walk in the Park series.

“I’m so sorry to hear that you and your dad have such a troubled relationship.” Again, nope. That was a fictional character.

For a time, I was terrified that anything I wrote would be dissected by people who knew me as they tried to figure out the parts that were true.

Now that I have a few books under my belt, ranging from Amish romance to stories set during World War II, I think people who know me are finally realizing that maybe my books aren’t based solely on my own life after all. I’m always quick to point out that if they were, I’d have run out of things to write about a long time ago!

It’s a question I get asked a lot—how much truth is in my fiction?

I’ll admit that sometimes I draw on my own experiences. The years I spent as a park ranger for the National Park Service inspired my Walk in the Park series. And there are times I’ll use my writing to work through things in my life. When my grandpa was killed in a car accident, I used that emotion in my next book. One of the characters in A Wedding to Remember in Charleston dealt with an unexpected tragedy, and I was able to bring some of on my own emotions to the page.

But that doesn’t mean my books are actually about my life! It just means sometimes I use my own experiences to bring life to my characters. I think that’s what most writers do.

After 11 books (and two more that were repackaged and re-released), I took some time off from writing. During my “writing hiatus” I met the love of my life, and six months ago, we got married.

I went from single and spending as much time as possible in the city, to married with three stepchildren and a fledgling farm in the country. Talk about a life change!

Now that I’m beginning to write again, I can already see that my new experiences are bringing a different perspective to the page. I’m hopeful this will make my characters more well-rounded and believable.

So even though my books aren’t actually autobiographical, there are still pieces of me in each one.

And now that I’m writing again, that means I’m plotting new stories–so I have a question for you readers! What is your favorite age range for heroes/heroines? Do you enjoy younger, twenty-something main characters? Or do you prefer to read about main characters who are a bit older? Let me know in the comments for a chance to win a paperback copy (US residents only) of my first novel, Love is a Battlefield! I’ll use Random.org to choose a winner on Saturday, April 5. 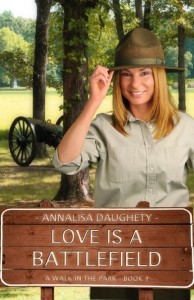 Leave a comment for the chance to win a copy of Love is a Battlefield!