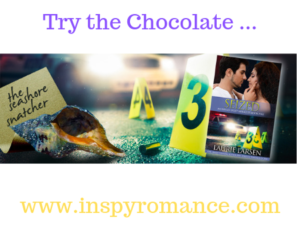 In my latest inspy romance, Seized, (released July 9, 2019) I’ve paired up kind and faithful Gloria Lockwood with Alejandro Rojas, a rugged loner who has never put a high priority on his own love life.

Gloria is sort of an angel on earth.  When her older sister and brother-in-law died tragically in a house fire fifteen years ago, Gloria set aside her own inexperience and offered her two devastated 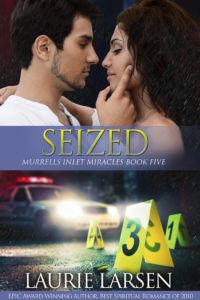 nephews a home.  She raised them as if they were her own, just as her sister would’ve wanted her to.  She couldn’t have loved two boys any more.  Now grown up, educated and self-sufficient, the boys have moved on and Gloria finds herself in an empty nest.  A quiet, dull, somewhat depressing empty nest.  How many of us have been through that ourselves?  I know I have.

Alejandro has always put his job first.  A policeman, he’s all about serving and protecting.  His own personal happiness was never as important as making the world safe for those around him.  And he has done a great job in the police department.  Until the one case that haunted him.  The Seashore Snatcher, a serial burglar intent on building a name for himself, sought publicity for a string of crimes that became increasingly severe, culminating in several people suffering debilitating injuries.  Alejandro was the detective charged with bringing the Snatcher to justice. Although he eventually did, his conscience keeps reminding him that if only he were better at his job, if only he had solved the mystery quicker, those victims would not have gone through the terror that they did.

When Gloria and Alejandro meet, it’s at a time in both their lives that they’re looking for a little fun.  A little companionship.  A casual romance would do them both good.  And the chemistry is there: sparks are flying!  Until Gloria discovers that Alejandro does not have a faith of his own.  Screech on the brakes;  this is a show-stopper.  He’s never been a church-goer and when she presses him about learning more about God and inviting Him into his life, Alejandro, feeling backed into a corner, scoffs, “I don’t need him.”

Whether Alejandro turns out to be the ultimate love of her life, or simply a non-believer God put in her path to help him see the light, Gloria feels called upon by God to help him.  So she asks, “What’s your favorite food?”  And he says, “Chocolate.” 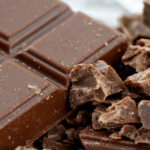 Here’s a short excerpt from their conversation:

“Can you imagine a life where you have never tasted chocolate?”

He paused cautiously.  “No.”

“Because chocolate is good, right?  It’s so rich and tasty and wonderful that once you tasted it, you never wanted to go without it, right?”

“But what if you lived in a world that never introduced you to chocolate?  What if you never ever knew what you were missing?  You’d go along, thinking your diet was full of great tasting things.  Vanilla, for example.  Or caramel.  They’re all good.”

He saw where she was going.  And he loved her all the more for trying to lighten the mood with her teachable moment.

“But they’re not chocolate.”  She came back to the couch and sat beside him.  “God is our chocolate.  You just don’t know how good life can be with God in it, because you’ve always settled for life without God in it.”  She reached out and gripped his hands.  “Try the chocolate.  Please.  For me, just reach out to God and ask Him in.  You won’t regret it.”  She let her gaze rest on his face for a silent moment and then stood.  “I think I better go now.”

Because Seized is an inspirational romance, and because we love our happy endings, I think you can predict what ends up happening for Alejandro, and Gloria as well.

My question for you today is:  have you ever shared your faith with a non-believer, to try to convince that person to “try the chocolate?”  To introduce the person to God because you know the person will be so much happier with God in his or her life?  If so, make a comment on this post and I will enter you in a drawing for a free ebook copy of Seized.