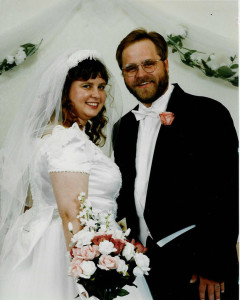 Twenty years ago this coming Wednesday, I walked down the aisle and exchanged vows with my husband. Wow. Twenty years. That’s like, older than a teenager! When I think about old married couples, I don’t think about us, because I don’t think we’re old. But then, after two decades of experience, I ought to have something to share with those who haven’t been as far down this road as we have.

Being a romance writer, I should be a hopeless romantic. And yes, I am, in some ways. But in other ways, I’m also a harsh realist. In these 20 years, I’ve seen couples who’ve made it, and some who haven’t. I’ve seen women (and men) sabotage what they have and walk right intothe same problems again. I’ve seen women who’ve gone from relationship to relationship, and things just “don’t seem to work out” for them.

I don’t claim to know everything, nor do my husband and I have a perfect relationship, but I’ve chosen 10 things to share about 20 years of marriage.

Like I said, I see women who continue to search for love. Whether they’re looking in the wrong places or not, I’m not sure. But they jump into relationships fast and heavy. When they’re with a man, all is bliss. I see notes and memes of affection posted on social media. And then, it fades and the anger surges for a while. Then, on to the next one. More professions of mush. It’s sad to see.

So, what should a woman do while she’s trying to decide if he’s “the one”:

1. Use your head, not just your heart, when deciding if this special person is the one for you. Romantic feelings are wonderful, dizzying, intoxicating. When you’re with that someone, the world is brighter, food tastes better. Without them, the world is darker and flatter. Just like a used car salesman, the dizzying hormones of attraction urge you to “act now” because this offer won’t come your way again. But use your head. Sometimes the heart deceives us into believing the feelings are enough to sustain a relationship. 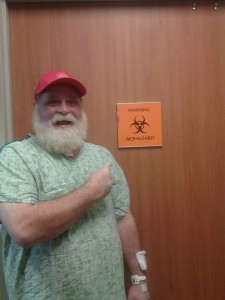 Laughing in the hallway at the hospital, the day after he had his thyroid removed. What’s behind THIS door?

2. Quirks and idiosyncracies are one thing, but major character flaws are another. So a guy picks his teeth with a knife and not a toothpick. That’s a bit odd if not dangerous, and weird to do in public. But does he drive angrily in traffic and cut people off, and exhibit true road rage? I’m not talking the road rage of getting cranky behind the wheel, but the kind where he really could put himself (and YOU) in danger? Which would you rather deal with?

Does he do his laundry and cook his food, and keep up (reasonably) with his house work? Does he kep up with his bills? Or is his apartment a few steps above an episode of Hoarders? Or does he keep getting calls from bill collectors? Tihs is also where #1 comes into play some more.

If he loves the Dallas Cowboys now, he will love them “after.” My husband is funny, quirky, hardworking, and laidback. He still is not a handyman. I only buy him the power tools he specifically requests, and I have not set about trying to convert him. If we need something done, we figure out how to do it—together—or we hire someone.

This amazing guy in your life? He’s not the source of your joy, your happiness, your well-being. That’s too much pressure for a man to live up to. Sure, he can bring you joy and do special things for you, and spoil you. You should be able to be yourself with him, more than with anyone else. But making you happy? That’s not his job or responsibility.

1. Laugh. A lot. Find random things to laugh at. Especially when things are tough. Even if you’re crying and don’t feel it. Humor buoys the spirits and helps you take yourself much less seriously. Because quite a few of the things (I didn’t say all) that upset us aren’t really worth getting upset over, nor are some of them under our control. We’ve laughed in the hospital, at cancer, at funerals, and more. Not to run from any pain or fear or whatever the “serious” emotion is, but humor, laughter has helped meld us even closer.

2. Guard your time together. Life intrudes whether you know it or not, especially when you’re not looking. Whether it’s kids, careers, hobbies, church activities, you name it—they can all intrude. Be jealous, not of other people, but time slips away from us so quickly. When “they” say time flies—it truly does.

3. Forgive. Forgive some more. Forgive again. The person you said “I do” to at the altar is fallible, human, flawed, in spite of the tuxedo. And so are you, despite the pretty dress. Forgiveness is often much better than being right.

4. Don’t keep score. “You always” and “You never” may be tempting to say sometimes (I know, because I’ve had to bite my tongue more than once in that respect). It’s a way of keeping score, and it only serves to create a mountain that even the most perfect man would be discouraged from climbing.

5. See #5 above. He still isn’t supposed to “make you happy.” My husband has done things for me that have touched my heart, and made me happy, and I’m thankful for that. On the other hand, he’s not the source of my joy and happiness. I can’t imagine my life without him, nor do I want to.

Those of you who’ve been married a long, long time—any other tips I’ve not mentioned?