We’ve just come out of a heatwave here in South Africa, had a few days of glorious summer showers, and have been plunged back into another heatwave. I’d posted on Facebook that if I were a snowman, I would be a puddle. I’d like to rephrase that: “If I were a snowman, I’d be an evaporated puddle.” An old family friend said of the hometown I grew up in which is known for its extreme heat that it’s so hot there now, even the devil has left town.

It was there I began writing my 2015 Christmas novella, Poles Apart. When we arrived in Finland mid-December 2014, the first thing we did was take a ten-hour road trip. Snow fell most of the way to our tiny cottage in the middle of nowhere. We were about an hours drive from Rovaniemi, official home of Santa Clause in Lapland which is situated on the Arctic Circle.

I used many of my experiences in Lapland and Finland­—some done purely for research—to write this Christmas story.

Today I thought I’d share a few of those memories with you.

The first few photos show the little Lapland cottage we stayed in. It also became the cottage that my Poles Apart heroine, Sarah Jones, hired to get away and write her Christmas novel. I think you’ll recognize the place if you purchase a print copy of Poles Apart and turn to the back cover (and the pages inside, too). 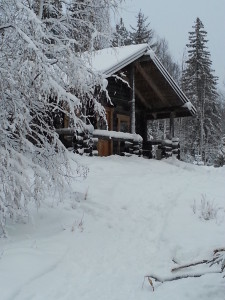 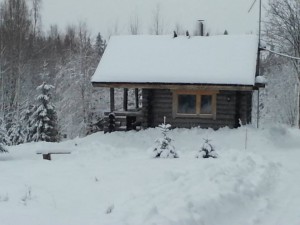 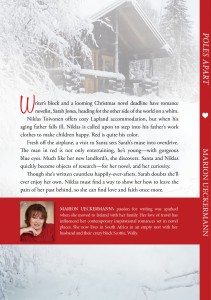 And if you’ve read Poles Apart, you’ll definitely recognize the tiny outdoor loo that had Sarah hunting the entire cottage for (and limiting her liquid intake throughout the story). 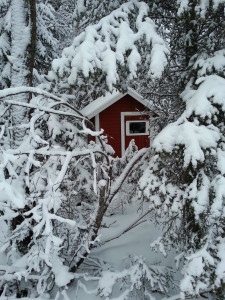 Of course, you cannot mistake the hero in the story in this next photo—only thing you don’t know, is whether this is Niklas the hero in disguise, or the real Santa Claus. 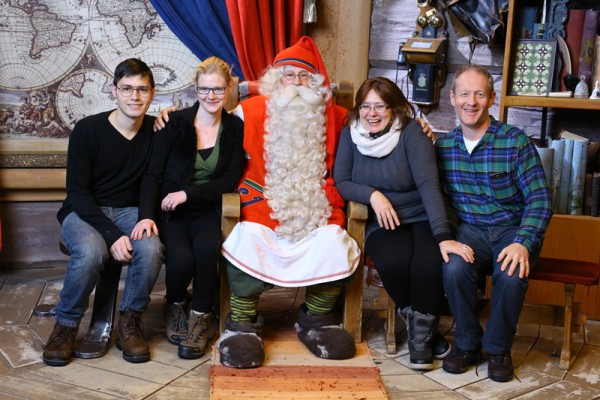 Here hubby and I are holding hands over the Arctic Circle line at Santa’s Village. Sarah finds herself at this spot, too. 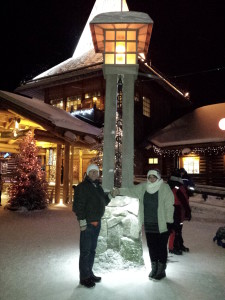 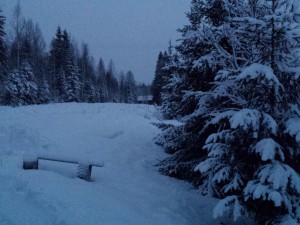 Sarah found the Blue Lapland Light fascinating, as did I. Neither of us had ever seen the world bathed in blue. This photo was taken around 9.30 AM. The blue color lightened over the next few hours, but was back again before 2.30 PM. Lapland’s days are short—the sun doesn’t cross the Arctic Circle’s horizon. We had hoped to see the Aurora Borealis (the Northern Lights). Sadly we didn’t. Sarah and Niklas, however, do see them in all their splendour, and by golly they are spectacular.

What Finnish story would be complete without a sauna scene? Poles Apart has a few. This is the tiny sauna in Sarah’s cottage. 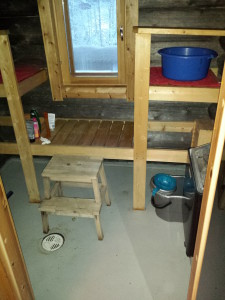 Sarah spent many hours in a similar pose, except her desk was far tidier than mine, and her laptop larger. 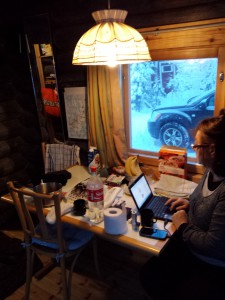 The doorway leading into the kitchen where Sarah hung the mistletoe. It was a real distraction to poor Niklas. 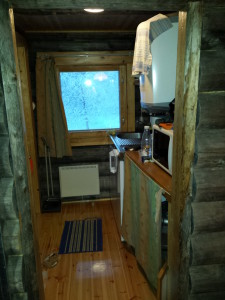 The following photos show the long run from the sauna to the avanto (hole in the ice) and I’ll entertain you with the bravest (or dumbest) thing I’ve ever done—jumping into the avanto—all in the name of research (see my avanto video on YouTube). I knew I had to do this before leaving Finland or I’d forever regret not doing it. How difficult could it be to run out of an 80 degree Celcius sauna and lower yourself into a hole cut in the frozen lake? Once I had conquered the avanto, I knew I had to write the experience into my Lapland story. I could not waste such costly research. 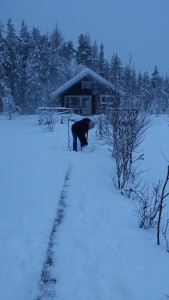 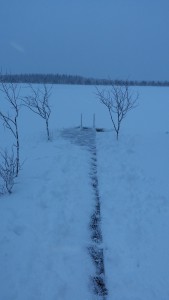 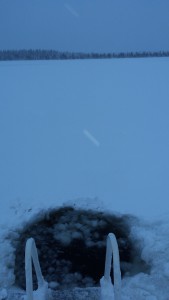 I hope you enjoyed travelling to my storyworld with me. It was great to take this trip down memory lane, and already I feel a whole lot cooler just looking at all this ice and snow.

Leave a comment below if you’d like a chance to win an eCopy of Poles Apart. If you haven’t read yesterday’s blog yet, my good friend, Narelle Atkins, posted a book recommendation on this fun Christmas story. 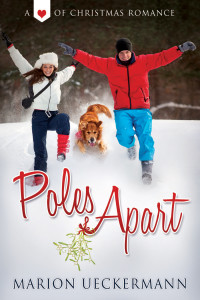 ’s block and a looming Christmas novel deadline have romance novelist, Sarah Jones, heading for the other side of the world on a whim.

Niklas Toivonen offers cosy Lapland accommodation, but when his aging father falls ill, Niklas is called upon to step into his father’s work clothes to make children happy. Red is quite his color.

Fresh off the airplane, a visit to Santa sets Sarah’s muse into overdrive. The man in red is not only entertaining, he’s young—with gorgeous blue eyes. Much like her new landlord’s, she discovers. Santa and Niklas quickly become objects of research—for her novel, and her curiosity.

Though she’s written countless happily-ever-afters, Sarah doubts she’ll ever enjoy her own. Niklas must find a way to show her how to leave the pain of her past behind, so she can find love and faith once more.