As a fiction writer, I’ve come to be aware of those everyday lessons in unexpected places.

And, I’ve come to the conclusion that water parks are no place for control freaks.

I learned a couple of things during a simple family outing to the waterpark. I prepared for a day of sun, water, good times and leaving the cell phone locked away for a day. Could I do it? Of course I could. 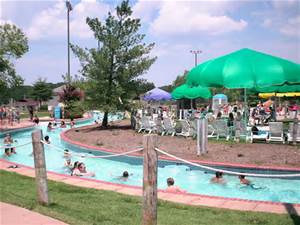 We found our inner tubes then got in line for the first of many rides where we’d bob along the water’s surface, splash away and maybe run some rapids here or there. What happened later made me more determined than ever to loosen up and relax.

Our first ride, I should have known it was going to be something else. Its name – The Congo. I learned firsthand how it feels to plunge in an inner tube down a waterfall (okay, so it was only three feet or so) in the dark.

I also learned how terrifying it is to go down the rapids backwards and also You can’t see the water rushing or the rocks along the sides of the river. After all, don’t we like to see what’s coming so we can brace ourselves for it, so we can kick and splash our way without getting turned over? I’ve long decided that I’d rather see up ahead what’s coming so I can brace for it. But no, we don’t often have that privilege. This is where I learn how much I need to trust that my Heavenly Father can see what’s ahead even if I can’t. If it doesn’t worry Him, it shouldn’t worry me.

For the last ride, we braved The Falls, supposedly the longest water ride in the world. Plenty of rapids, twists, turns, a few lazy drifting moments and a good dunk in the drink (don’t ask about how much water I sucked in). But then came one part of the river, lazy and ambling, that curved around toward the original part of the course. 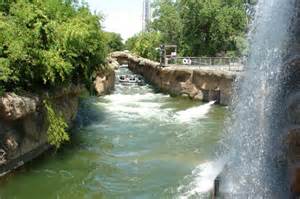 Then the course split in two directions and I found myself swirling to the left. And I found myself right back where I’d just come from and meeting a pile of squealing people on tubes shooting out from some rapids. Oops. I hadn’t meant to drift this way again. Next time I hit that fork, I determined I’d take the right side of the fork and follow the others. So here it came, but the current was too much for me and I ended up zooming merrily along to the left again. Just like life, I found myself right back where I’d just been, in some odd version of Groundhog Day at the waterpark.

So I did what you’re not supposed to do. I got out of my tube and stood up in the water. No way was I going back again. I was tired, the day was done and I had no more patience to be at the mercy of a ride when all I had to do was stand up and walk to the nearby kiddie beach. I finally rejoined my husband and we found our kids.

Life on the rapids does involve trusting God, but there are also times when I believe He expects us to stand up and move and not be tossed or sucked in a direction that’s not good for us. It takes effort on our parts, but I believe He rewards us stepping where we need to go.

Psalm 93:4 The Lord on high is mightier than the noise of many waters, yea, than the mighty waves of the sea.