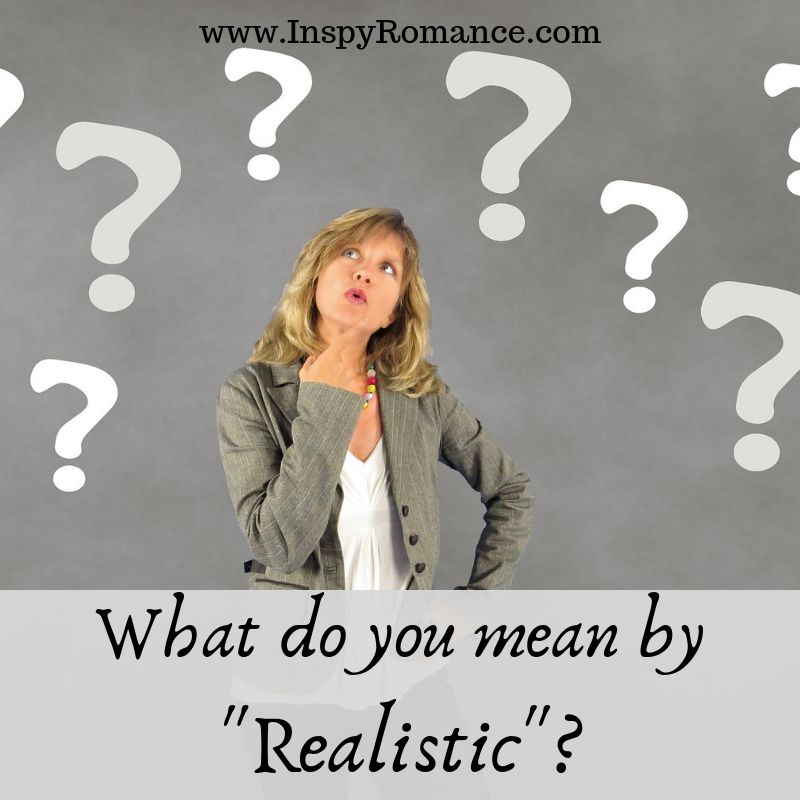 One of the things I hear a lot when I’m poking around in reader groups is how much readers want “realistic” fiction. For the longest time, this gave me a lot of hope. My stories are full of realism!

Over time, however, I’ve started to wonder if maybe my definition of realistic is different than the majority of readers. (Kind of like how I don’t see a lot of reality in reality television.)

When I say I like realistic romance, I’m looking for several different things. First up, the characters.

Realistic characters, to me, means the people in the book should feel like people I might know (or I could get to know, given the right situation.) So, more often than not, that rules out the mega billionaire, the movie star (or other famous person), and royalty. And none of that is to slam those sorts of novels – if those are your jam, read on! When I’m not reading romance, I’m more often than not reading something with spaceships and aliens in it or a detective chasing down a serial killer.

“But Elizabeth,” you might say. “Don’t you ever think your scifi has realistic characters?” And I guess I go to…kind of? I can see the argument for a realistic character being anyone who behaves and speaks in a way that’s accessible and approachable. Maybe it’s splitting hairs, but I’d be more inclined to say those scifi characters are relatable. Not realistic.

Relatable totally matters though! If there aren’t characters I can care about, I know reading the book isn’t going to be as enjoyable as it could be.

These are the stories that I try to write. It’s why my books include Christian women who have had an abortion and discovered it wasn’t the total solution to their problem they hoped it would be. Or a pregnant teen with a father who’s trying to be supportive but failing miserably. Or a recovering alcoholic who has swung past grace into legalism because he’s still so ashamed of his past, despite Jesus’ forgiveness. Or couples going through infertility and being tempted to give up on their marriage because easy is a lot more attractive than perseverance.

But those story lines haven’t been commercially successful.

And so I started to tweak things. I moved out of the city and suburbs to a small town. With my Peacock Hill books, I tried hard to keep things lighter. And I managed it for three books. Then one of my characters turned up with a gay best friend. I contemplated taking Brian out, but he was there. Just like he would be in our real lives. And figuring out the right way to love as Jesus would love while still holding to the Truth of the Bible is the kind of thing we should all be wrestling with if we’re going to live in today’s world.

I thought Brian might be a one book guy. But he’s back in the next book–possibly with even more air time than in the previous–and I love him. Because, to me, he’s realistic. And the challenges he brings to the page are also realistic. But I suspect he’s going to end up being too realistic for the bulk of the readers out there. And that’s okay.

I’ve been doing a lot of thinking about what to write when I finish my Peacock Hill series in the fall. There’s a part of me that wants to figure out what stories are selling and join that crew – there are bills to pay, after all! But the larger part of me has realized what a relief it’s been to write Brian and return to incorporating the challenges of living for Jesus in today’s culture that are so often pushed aside as hot button political topics rather than heart issues with which we all have to grapple.

What about you? When you say (if you say) you want to read realistic fiction, what do you mean? What are you looking for? I’d love to know!

I’ll choose 2 commenters to have their choice of my books on the morning of Saturday, July 20th.