Publishers have long used print anthologies  to introduce new authors to a wider range of readers who may buy the book because of the popular lead author on the cover.  You’ve probably seen many such anthologies on the bookshelves….an extra thick book, which includes  three or four full length novels, or perhaps the works are in a shorter format, such as  novellas.  Being part of an anthology is a lovely opportunity to reach new readers–who will  hopefully become ongoing fans.  Do you enjoy reading this type of book?  Have you ever read an anthology and discovered great new authors that you loved?  Did you then hunt down their backlist, or watch for their upcoming releases? Can you  remember any such authors in particular?

A variation on this format is when a publisher might develop a whole series of individual books written by a number of authors. The editors decide on a theme, or some sort of relationship between the main characters, or perhaps an overarching plot thread, then invite authors to participate. Each one writes his/her own book, but they must coordinate and connect in some way–and the details must be consistent.  For instance, if the books involve a small town, the street names and secondary character names/descriptions need to match!  :)

I’ve been in a number of these series, for both Superromance (in my old secular days) and later, for Love Inspired Suspense.  It can be such fun to work with  the other authors and get to know them better.  It can also be a challenge  to work out all of the plot, setting, and character details from one author’s book to the next, though.  Literally hundreds of emails flew back and forth between the authors on the last six-author series I did.

In recent years, with  e-readers and indie publishing becoming so popular, another type of group effort was born: the indie anthology.  Around four years ago these were really catching on, and now the  number of titles has truly proliferated. You can find them on just about any topic you can imagine.  Though these may be called “boxed sets” they are  generally in  e-book, not in a  physical form–especially if a large number of authors contributed. Below, you can see  just such a cover. They do look  like a boxed set, don’t they?    Have you seen these anthologies for sale on Amazon, Nook, Barnes & Noble and other websites? Have you ever bought one? What did you think?

I’ve been involved in three such indie, e-book anthologies (Sweet Christmas Kisses ) published by  the  Sweet Romance Reads”  group, including the Vol III release for 2016 which includes seventeen authors and comes out the end of this month. This year, our SCK III has a pre-order price of just 99 cents.   Just to give you an idea about why we’ve never considered offering them in print form, the first one (2014) would have been over 1,600 pages long. Imagine trying to read that in bed!

It seems  as if there are a thousand details to work out before such an anthology is finished, and usually some promotion efforts as well…because there are certainly a lot of other fish in the pond vying for attention.  So a good group of hard-working authors is essential.  The end result, though, is  an opportunity for readers to meet a LOT of different authors with a single (and usually very inexpensive) purchase of the many boxed sets available. This format seems to be popular.  The first two Sweet Christmas Kisses anthologies spent a total of five weeks on the USA Today Bestseller list amongst all the novels in every genre  (three weeks for the first one,  two weeks for the second), which was sooo exciting!

I know some of the other authors here on Inspyromance have participated in these  e-book anthologies, also.

So…have you ever purchased an e-book multi-author anthology?  What did you think?  Did you find any new favorite authors?  Did you feel as if got a good bargain for your money? 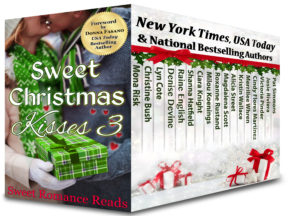 I’d love to hear what you think about this new wave in publishing!

Those who comment here will be in a drawing for  the THREE copies of Sweet Christmas Kisses III that I’ll be giving away.

Just so you know, this SCK III anthology contains novellas by sweet romance authors, and also some by inspirational authors–so it is all a “good clean read” but just some of the novellas have an inspirational thread.