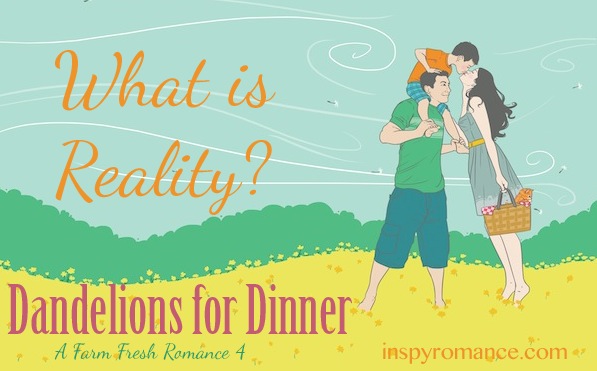 A writers’ group I’m in recently discussed terms for romantic fiction that isn’t quite as innocent and sweet as some other romances. Words like “edgy” and “gritty” and “realistic” were tossed around until someone pointed out that one person’s edge is someone else’s middle-of-the-road, and one person’s reality may be miles away from someone else’s.

Fiction, by its very nature, isn’t all that riveting if everything is sunshine and roses. We’re pretty fond of Real Life™ that way, but bored to tears if there’s no conflict in fiction. Why is anybody’s guess, but it seems true across the board.

Allison Hart isn’t a particularly nice woman at the beginning of Dandelions for Dinner, the fourth book in my Farm Fresh Romance series, which releases Tuesday. She’s got some severe hang-ups about men. She believes they’re all the same. Jerks. Users. Weeds in her life. She doesn’t tell anyone for a good many pages why this is her reality.

It stood to reason she should not fall in love with any guy, which would definitely be her preference. Her future was going to be all about her moving to Green Acres Farm, teaching in their new farm school (now under construction), building herself a little cottage of her own, and getting a dog. A big one.

Problem being, she’s not a building contractor. Brent Callahan is… and also happens to be male. Allison detests having to work with a man on this — or any — project.

So I had a choice to make as I considered what kind of man Brent was. A sweet Christian guy who would win her over with flowers and chocolate? Hmm. That wasn’t likely to cut it for Allison. She’d walk straight over him with her steel-toed boots and not even notice.

How about a Christian guy who had issues of his own? Maybe something in his past that, when it comes back to bite him, will prove to Allison that he’s just like she thought all men were. Now there’s a story that could take several different turns!

Allison and Brent’s reality is very different from mine, and I’m thankful — very thankful — that I required a good dose of imagination to get in their heads and tell their story.

I dedicated Dandelions for Dinner to a young woman I’ve met who knows far too well the “reality” portrayed in this novel. To Jessica and to you, I say, “there is always hope.” 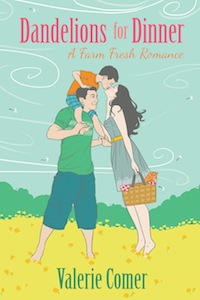 She hates him. He loves her not.

Men are weeds. Allison Hart doesn’t need them in her carefully tended life, though her friends at Green Acres seem happy with their guys. Why can’t Allison open her heart to anyone but her young nephew? Then again, he’ll be a man one day, too. If only the irritating contractor in charge of building her home and farm school wasn’t the boy’s favorite person.

Fireworks with Brent Callahan’s newest client shift from antagonism to the rocky possibility of a relationship. When he comes face to face with a history he’d much rather forget, he realizes hiding his failures isn’t the best option for finding forgiveness, let alone love.

Can a little boy help weed out the past before it chokes their future together?

Dandelions for Dinner is currently on pre-order for only 99¢. It releases Tuesday, March 3, at $3.99, so reserve your copy while it’s on promotion! You don’t have to have read the first three books in the Farm Fresh Romance series, but if you haven’t… why not? ;) The first title, Raspberries and Vinegar, is free on all e-book platforms.