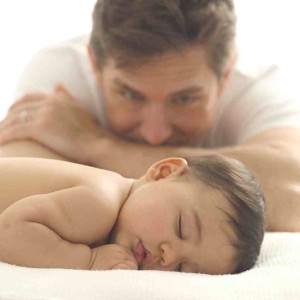 As an author and an avid reader of Christian romance, I adore a hero who loves children. I’m talking about a man who does more than nod, smile and pat a child on the head. I’m referring to a man who really listens when a child speaks, a man who values their opinions and treats them with respect and honor instead of dismissing them. A man who prays with them and for them.

One of my favorite books of all time is To Kill a Mockingbird by Harper Lee. Published in 1960, it quickly became a popular and enduring novel in American literature, winning the esteemed Pulitzer Prize. Although the book deals with such tough issues as rape and racial inequality, it also has endearing warmth and humor—two things I always must incorporate in my own books. But the primary reason I love this great novel? The lead character, Atticus Finch, is a sigh worthy hero in every sense of the word. A widower, he patterned an example of moral strength and deep integrity and, in particular, for his two children, Jem and Scout. As opposed to some of the rough and tough modern day heroes in books, Atticus was a unique breed of hero: a true gentleman who wore three-piece suits, preferred to walk instead of drive, used his mind instead of his fists, and loved to read books. In his kids, Atticus fostered a sense of empathy, tolerance, respect and fair-mindedness. According to some accounts, Atticus is probably best remembered as an exemplary father. 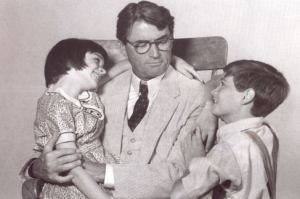 One of my favorite things is incorporating children into my books. Some of my all-time favorite scenes are those involving men and their interactions with children, whether their own children or not (but especially with their offspring). Everyday events such as feeding a child, rocking a child or reading to a child. Here’s a couple of short examples featuring the core character of The Lewis Legacy Series, Sam Lewis, from Book #5, Moonbeams (not to be egocentric, but I know my own characters best—your opportunity to share other examples is coming!):

“Snack time. Yum.” Removing his suit jacket and hanging it on a hook by the side door, Sam took a chair at the table with his girls. “What are we having today, Leah?” He nuzzled his baby girl’s cheek.
“Dada!” Leah giggled and clamped both hands on Sam’s cheeks, squeezing them between her two small, chubby hands. When he blew a loud raspberry, both girls giggled like they’d never stop.

And one more with the girls and Sam’s son, Joseph, following a softball game (a year later than the above scene):

“Joe, can you get my bag, buddy?”
The bag was almost as big as Joe, but he didn’t seem to mind as he retrieved and dragged it across the ground.
“Thanks.” Removing his cap, Sam put it on his son’s head. “One of these days, you’ll be playing on the team with me, too.” The look on Joe’s handsome little face was precious.
“Here, Lexa. Time for Hannah to go in the stroller.” Sam carefully lowered her from his shoulders and transferred her into Lexa’s arms.
“No, Daddy,” Hannah said, wiggling and sliding down from her mother’s arms. She wrapped herself around Sam’s legs and looked up at him with pleading eyes. “Sip?”
“Leah? Come with Hannah and Daddy.” Sam beckoned his dark-haired daughter closer. Holding each of his girls’ hands, one on each side, he began to half carry and half skip with them across the field in the direction of their cars.

Yo see, at one point in Awakening, the first book in the series, Sam told Lexa (the heroine who later became his wife), he’d never skip unless he was holding the hand of his daughter. That would be the only reason to justify such a thing. That’s the beauty of writing a series; bringing these things to fruition. And, thus, Sam skips with his twin daughters. Double the joy! 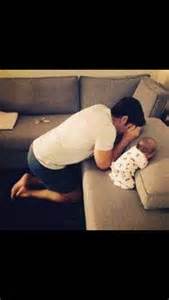 The Bible has many verses about children and admonitions for men concerning raising children, and here are two of my personal favorites (ESV version):

Fathers, do not provoke your children to anger, but bring them up in the discipline and instruction of the Lord.
~ Ephesians 6:4

Turning the knob, Josh peeked inside Chloe’s bedroom. Enough moonlight filtered through the slanted blinds for him to make his way over to the side of her bed without stumbling over the scattered toys on the carpet. Kneeling beside the bed, he gazed at his sleeping daughter. Lord, what did I do to deserve her? Blonde ringlets hung over her eyes and trailed onto her cheek. Josh lifted the loose curls and brushed them aside. Her skin was warm, her cheeks rosy as a cherub’s. Her pouty, full lips curved in a smile, even in her sleep. So beautiful . . . this girl would break many a boy’s heart in the future. She’d already brought him to his knees. Chloe’s chest rose with the swell of her quiet breathing. She took in a deep, shuddering breath and shifted onto her side, facing him.

Josh muffled the sound of his involuntary cry with one hand. She turns me into a quivering mass of jelly, Lord. I’d do anything for her or her mother. She already has my heart. Help me do right by her and Winnie. Putting his hand lightly over hers where it rested above the sheet, he bowed his head and prayed. Lost in his prayer, he didn’t know Winnie stood behind him until she squeezed his shoulder. Wiping his eyes, he followed her out of the bedroom.

Your turn! Name/describe a favorite scene between a man and a child in a book you’ve read—either a longstanding favorite or a recent book. 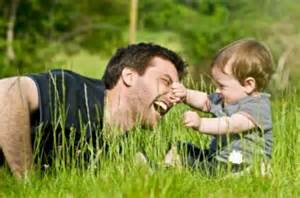