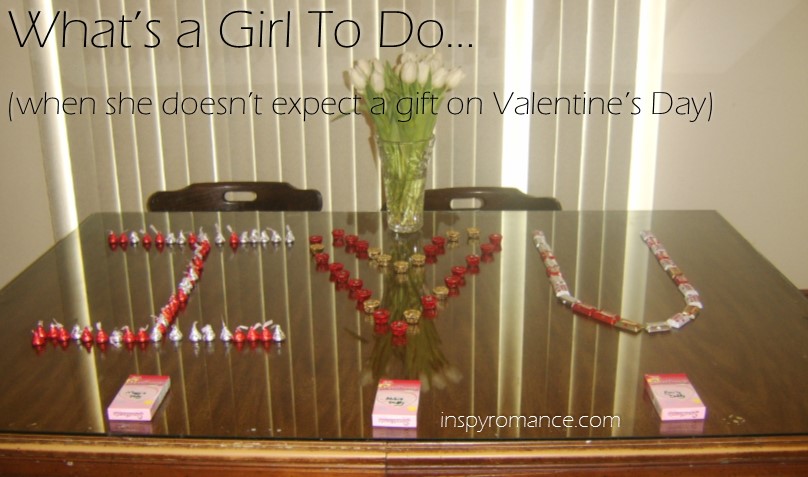 Once Upon A Time… many years ago…

Okay. Sixteen. It was sixteen years ago.

Remember what it was like when you were poor college students? Presents were usually things like a homemade card on a piece of paper you snagged from the printer at work.

We’d decided not to do anything for Valentine’s Day because of the aforementioned broke-student-status. We’d been married nearly four years. Had a house with a mortgage. Car payment. The whole nine yards. 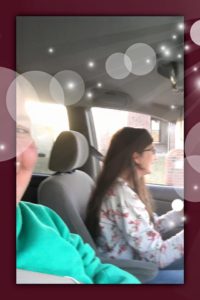 Last week… a (very slow) drive around the neighborhood

The night before Valentine’s Day, Matt kind of went on a tear, cleaning the living room and kitchen until they shone. I wasn’t feeling it and didn’t help much and, well, he was kinda grumpy about it.

He was still awake, cleaning, when I went to bed. The next morning, he was gone before I woke up. This was our life. He worked 38 hours a week, did 20 hours of (unpaid) internship, and 10 hours of grad school a week. I was teaching part-time at the local community college, and taking like six credits to finish my Master’s degree, but I didn’t have to be at work until early afternoon.

A trail of Hershey’s kisses leading from our room to the living room.

Where on the table sat a small teddy bear, balloons, a devotional book, and a card. With more kisses, Dove chocolate hearts, and mini Reese’s peanut butter cups, he’d written I <3 U.

Now that I’ve kissed the ground you walk on, will you be my Valentine?

What’s a girl to do when he does that, and you’ve got nothing planned in return?

It finally hit me…

Pee on a stick.

We’d been talking about being ready to start our family since we were almost done with our degrees, and I thought, well, why not? I dug around in the cabinet and found a pregnancy test. Took the test. Was so sure it would be no that I hopped in the shower to get ready for work without waiting to see the result.

With the entire bathroom (including my glasses) steamed over when I was done, I peered at it. Over the glasses, because I couldn’t see anything through them. 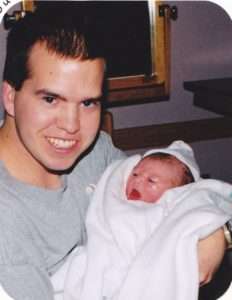 So I freaked out. Now what? But I had to go to work. I get home a few hours later, dig out a book I’d bought just in case – for someday – The Expectant Father: Facts, Tips, and Advice for the Dad-To-Be. I’d found it on clearance for like three bucks and was saving it for this day.

Matt gets home and I hand him the book, wrapped in leftover Sunday comics. I tell him to take it with a grain of salt (mostly because I wasn’t sure I believed the two lines). He opens it and was like “oh. thanks.” Yeah. Little too much salt there, buddy.

I pulled the test (safely ensconced in a Ziploc) out of my pocket, and I said, “No. Take it with a grain of salt, because I’m not sure I really believe this.”

He stared at me, dumbfounded.

Pretty much like I’d been for a few hours. Then it finally started to sink in.

He’d planned to surprise me, but I surprised both of us instead. 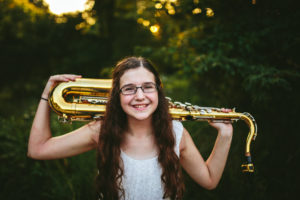 That October, we welcomed our first bundle of joy, a beautiful little girl named Linda Margaret (after my mother and a family name – every generation back to before the Revolution has a Margaret). She’s grown into a smart, beautiful, caring, talented young woman. (And cover model ;). She’s the teenager on the cover of Grace to Save!) Maggie plays a mean tenor sax – along with clarinet and she’s learning piano (and wants to learn pretty much every other kind of saxophone as well as bassoon). Her goal is to take over for her band director when he retires (the timing should be right!) and loves marching band (the Super Bowl is on right now… she just wants to know where the band is – after all, football is what happens on the band field before and after their performance…). In so many ways, she’s my mini-me (except I can only play the radio – and, on a good day, an app on my phone). She’s artistic and funny and my day isn’t complete without a stupid meme via text or more puns than I know what to do with.

Two years later, on Valentine’s Day, we found out she was going to be a big sister. That October, our second daughter was born – followed later by another daughter then our son. Their “finding out I’m pregnant” stories aren’t quite as Valentine’s Day-y though :D.

Since one of the kids found out about the “I <3 U”, they insisted Dad still needs to do it. So he does. Along with conversation hearts for the kids. They still love it!

What about you? What’s the best unexpected present you’ve received?