Here’s hoping you haven’t tired yet of hearing about A Tuscan Legacy. I guess with six of the seven authors in the series being Inspy authors, it’s inevitable that there are going to be a lot of blogs about this new series.

The success of the series isn’t just about writing great stories that will keep readers hooked from book 1 to book 9, it’s a lot about marketing too … getting the word out to readers about A Tuscan Legacy through blogs like this one, ads, giveaways, and Facebook parties to mention a few. And not forgetting using memes as a marketing tool. These are probably my favorite as they can be used in so many places.

I created a couple of memes for the pre-order releases of That’s Amore (book 1) and Ti Amo (book 4), and I thought I’d share these with you today to enjoy. I’d love to hear from you which is your favorite and why. You could win the e-copy of Ti Amo that’s up for grabs.

The first one you would have seen was for my first Inspy blog about this series.  For those of you who have read That’s Amore, you’ll now find this scene rather familiar… 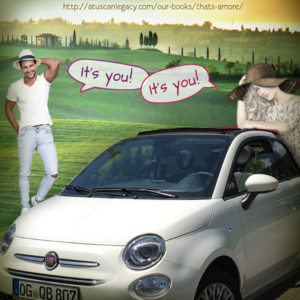 Then came the pre-order meme for That’s Amore, and a few more fun ones… 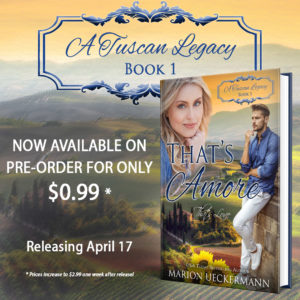 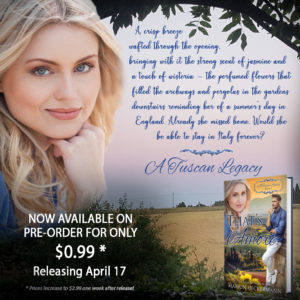 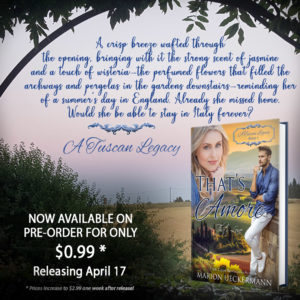 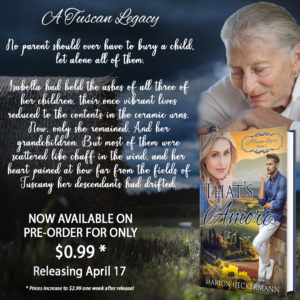 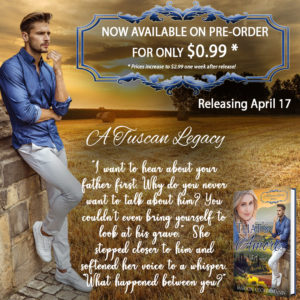 When Ti Amo went on pre-order, my Facebook, Instagram, and Twitter feeds were plastered with the following memes… As usual, I had a ton of fun with Alessa—she’s such a character! 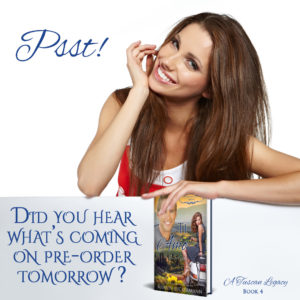 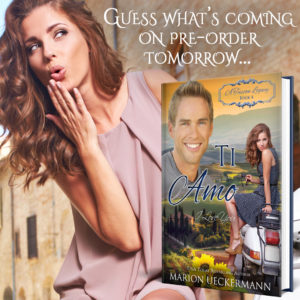 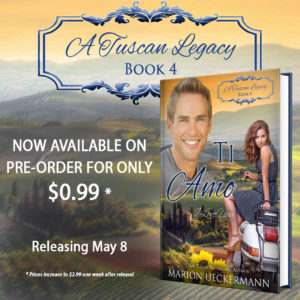 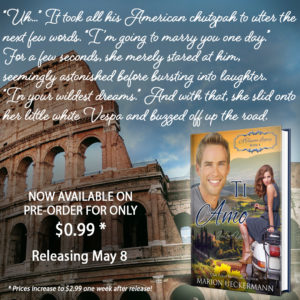 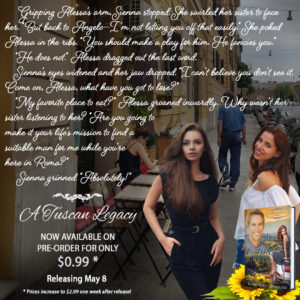 Ti Amo releases on April 15th, a month after book 1. As you can read the first scene on A Tuscan Legacy’s website, I thought I’d give you another excerpt—the one from this final meme—to whet your reading appetite. But first, the blurb…

She never wants to get married. He does. To her.

The day Alessandra Rossi was born, her mammà died, and a loveless life with the father who blamed the newborn for her mother’s death followed. With the help of her oldest brother, Rafaele, Alessa moved away from home the moment she finished school—just like her other siblings had. Now sporting a degree in architectural history and archaeology, Alessa loves her job as a tour guide in the city of Rome—a place where she never fails to draw the attention of men. Not that Alessa cares. Fearing that the man she weds would be anything like her recently deceased father has Alessa vowing to remain single.

American missionary Michael Young has moved to Rome on a two-year mission trip. His temporary future in the country doesn’t stop him from spontaneously joining Alessa’s tour after spotting her outside the Colosseum. And being bold enough to tell her afterward that one day she’d be his wife. God had told him. And he believed Him. But Alessa shows no sign of interest in Michael.

Can anything sway the beautiful and headstrong Italian to fall in love? Can anyone convince her to put her faith and hope in the Heavenly Father, despite being raised by an earthly one who never loved her? Will her sister’s prompting, or a mysterious painting, or Michael himself change Alessa’s mind? About love. And about God.

“CIAO.” Alessa waved as she exited Ciacco & Bacco, her sister close behind her. She glanced up at the clusters of pink bougainvillea that stretched over the entire front façade of the sandwich shop—from the door to the window on the other side of a buttercup-colored wall. She glanced over her shoulder to see Sienna wave too.

“Buonasera, Angelo!” Sienna linked her arm with Alessa’s as the door shut behind her. She giggled. “He certainly has the right name. He’s like a beautiful angel.”

Alessa released Sienna’s hold on her. “Oh. Never mind him, what did you think of the sandwiches? Delicious, huh?”

“The best I’ve tasted in a long time. I doubt I’ll be able to eat again tonight.”

Gripping Alessa’s arm, Sienna stopped. She swirled her sister to face her. “But back to Angelo—I’m not letting you off that easily.” She poked Alessa in the ribs. “You should make a play for him. He fancies you.”

“He does not.” Alessa dragged out the last word.

Sienna’s eyes widened, and her jaw dropped. “I can’t believe you don’t see it. Come on, Alessa, what have you got to lose?”

“My favorite place to eat?” Alessa groaned inwardly. Why wasn’t her sister listening to her? “Are you going to make it your life’s mission to find a suitable man for me while you’re here in Roma?”

Skewing her mouth down on one side, Alessa gave a slight shrug. It did beat her sister trying to save her mortal soul. Alessa was about as interested in religion as she was in marriage. Where had God been when it mattered, when she’d hurt so as a little girl?

This was going to be an interesting three days.

She took Sienna’s hand in hers. “I know you mean well, sorella, but you’re wasting your time looking for someone for me. Rather, concentrate on all the sights I’m going to take you to instead of the men hanging around them.”

“Oh, I intend to do that. As well.” Sienna pouted. “Please don’t take away the fun of me seeking a suitable man for you. I can’t bear the thought of my baby sister all alone in this big city.”

“Ha, says she who is all alone herself, halfway across the world in her own big city. And barely a year older than I.” Alessa continued walking. “Or is Sydney actually your secret innamorato.”

Sienna burst out laughing. “Oh, you make me laugh, little sis. That is the funniest thing I’ve heard in a long time.”

“Then you need to get out more.” A smile teased Alessa’s lips.

“In my defense, nobody has ever likened the city I live in to some heartthrob I’m not telling anyone about. What a clever pun,” Sienna said. “Anyway, my search for your true love has been rather enjoyable so far, so please don’t spoil my tomfoolery, sorellina.”

“Sydney…Tom…you are just full of surprises now, aren’t you, Sienna?” Alessa raised one brow. Growing serious, she blew out an exasperated breath. “Fine, have your fun at my expense, but I warn you, any efforts will be futile. I could have my pick of a hundred good-looking men—”

“Pfft, I’ve no doubt about that, Alessa. Look at you—you’re perfect.”

Alessa ignored her sister’s compliment. “I’m simply not interested in settling down. I’d rather love them all and marry none. That way I won’t be the one with a broken heart. And I won’t be putting any children at risk one day by having a father who may not love them. I couldn’t bear to put anyone through the same loveless childhood I had, craving a father’s love but never receiving it.”

Sienna drew Alessa into a side hug as they stopped beside Alessa’s scooter. “I’m so sorry you feel this way, sorellina. But I do understand.”

Alessa’s gaze searched hers. “Do you? Really? You were always Papà’s favorite—if he ever really had something like that. He did seem easier on you, though, than any of us.”

Sienna didn’t respond, and silence descended between them.

It didn’t take long for Alessa to break it. “Wait here while I run inside my apartment to fetch our helmets.”

“Don’t look so surprised. I do have friends who need a ride from time to time.”

Alessa soon returned toting two backpacks with the helmets inside. They made it easier to carry the head protectors around the city. She really did need to invest in a bauletto—the top box on the back carrier would make life simpler. But she always found she’d rather spend the money on shoes or designer jeans. One of these days perhaps.

Sienna’s mouth fell open as Alessa neared. “You’re not going out in that, are you?”

Alessa glanced at the white cotton off-shoulder top she’d changed into, the loose-fitting design far cooler than the T-shirt she’d worn earlier. Her gaze extended to the denim shorts she now sported. Hmm, she hadn’t even realized how tanned her legs had become in the time at the villa.

“What’s wrong with this?” Alessa gestured toward her body.

“Exactly why they’re call shorts. Besides, I couldn’t go traipsing around Roma in my jeans and heels, could I? You want to go and change too?”

Sienna shook her head. “I’m fine in this blouse and slacks. So, where are you taking me first?”

Alessa tugged her helmet from the backpack, and then pressed it onto her head, tucking her hair out of the way. She fastened the strap beneath her chin before securing both empty backpacks to the chrome luggage rack at the rear.

Sienna examined the helmet in her hands. “Pink, huh?”

Her sister laughed. “What do you do when you have a male passenger?”

Alessa stared at Sienna then slid onto the scooter’s seat. “They wear pink. Men do wear pink, you know.”

“I know. It’s just—” Sienna cut off mid-sentence as she cinched her strap. She hopped on behind Alessa. Soon the two sisters were buzzing through the busy streets of Rome, the Vespa zigzagging between cars.

Don’t forget to let me know your favorite meme for a chance to win an e-copy of Ti Amo. Comment entries for this giveaway close on Saturday, May 5th.