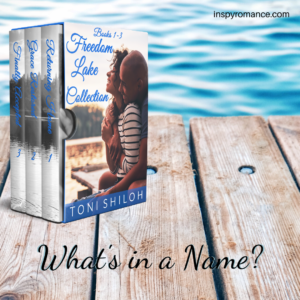 For as long as I could remember, I’ve been interested in names. Their meanings. Why parents pick certain names. Etc.

As I got older and delved into the Word, I became fascinated with how God changed the names of those He called. When we encounter God, repent of our sins, He changes us. Not just inwardly, but our name as well.

It’s why I always take care when naming my characters. Some are very intentional and I use my favorite website (Behind the Name) to pick the right one. Some were chosen by my readers.

But Freedom Lake is also a place where each of my characters found freedom in the Lord. All my heroines (Jo, Michelle, and Chloe) and heroes (Evan, Guy, and Darryl) come from different walks of faith. Some are nonbelievers, in between, and staunch Christians. But still, they all had a past to overcome, trials to walk through, and an awakening of faith that leads to freedom.

And just for fun, I’ll share the meanings of my characters in the Freedom Lake Collection.

Evan – apparently Evan is a Welsh form of John which means God is gracious.

Jo Ellen – well I put these two names together because I liked the sound of it and I knew that Jo would shorten it. It fit her personality of who she is but also showed us who her mother wanted her to be. Jo can be considered the feminine form of John and Ellen was formerly Helen, which means torch.

I think it’s awesome that both Evan and Jo can be linked to God being gracious. If you’ve read their story, this makes perfect sense.

Guy – has a French history meaning wood or wide.

Michelle – is the feminine form of Michael, which means “Who is like God?”

Darryl – has many spellings and originally meant a person from Airelle in France.

My name is the feminine form of Anthony which comes from the Greek meaning of flower. (Am I the only one picturing Toula’s dad explaining how every word comes from the greeks?)

Now it’s your turn. I’m offering a $5 Amazon gift card to a random winner. To enter this giveaway, leave a comment telling me what your name means. Leave a comment by 1/10/20 11:59pm EDT. (Feel free to search on Behind the Name, or other name database in case you don’t already know the meaning.) I’ll pick a random winner on 1/11/20.